Terrytoons’ “Deputy Dawg” on Records
A Smattering of Spots! A Reel of John Hubley’s Storyboard, Inc Commercials
BAXTER'S BREAKDOWNS May 25, 2016 posted by 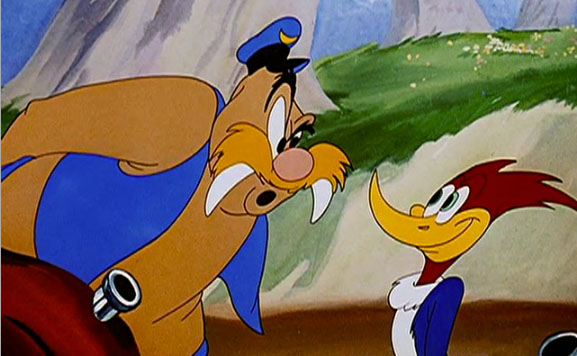 Dick Lundy’s Well Oiled (1947), along with other Lantz cartoons with Woody Woodpecker antagonizing Wally Walrus, adheres to the studio’s heavy emphasis on sight gags. After Woody siphons gasoline from Wally Walrus’s police vehicle — lifted from 1943’s Ration Bored, which co-starred a nondescript officer — the chase ensues, and the pursuit transpires around a service station. Later in the film, Woody and Wally fight a messy battle with grease guns. Compared to Warners, there isn’t much psychological precision in these simple gags, but instead, the sequences unfold in the manner of a frenetic live-action short comedy. 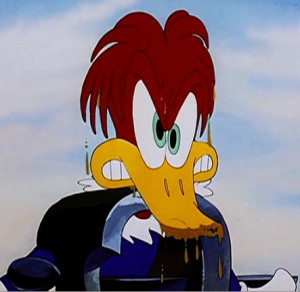 Les Kline and Pat Matthews are credited on the film; Kline handles a high amount of footage, such as the extended sequence with Woody stealing gasoline, the side effects from swallowing it after being caught, and the interaction between Woody and Wally before the chase. Kline also animates on scene 28, where Woody inflates Wally, after being flattened by a laundry wringer, and initiates a duel with a large glove. In the scene, Kline seems to have put too much volume on Wally’s body, compared to his previous scenes; it’s as if Woody over-inflated him. Matthews is assigned minimal footage, animating the chase along the country road and Woody’s disguise as a bearded service station attendant.

Uncredited animators on this film, indicated in the draft, are Hal Mason, Grim Natwick, Casey Onaitis and Verne Harding. Mason animates the opening scenes of Woody driving along the woodlands, up until he gets the idea to “borrow a little gas.” Harding animates large sections of the grease gun fight, with Onaitis animating others, including scene 32, when Woody inexplicably brings a machine gun to fire cans of oil at Wally. Natwick animates a small amount of scenes, and animates the film’s finale as Woody, fastened to a vice, gets his final comeuppance from Wally. (Natwick also animates the country cop, fashioned like a costumed bit player in a silent comedy.) 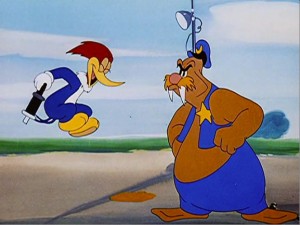 Casey Onaitis, whose work might contain the weakest animation in Well Oiled, previously worked at Harman-Ising in the mid-‘30s before joining Lantz. Later, he went to John Sutherland’s studio and UPA in the ‘50s, finishing his career at Filmation. Hal Mason animated for Lantz in the early ‘40s, often credited as “Harold Mason.” He left the studio to serve in the Army by January, 1943, and returned to Lantz three years later. After he left the studio, Mason created a number of memorable characters for television commercials—including Mr. Clean, the Pillsbury Dough Boy, the Frito Bandito and the Raid cockroaches.

Woody’s opening rendition of “Polly Wolly Doodle” is delightful and silly on its own, when it’s sped up in the film. How does it sound when it’s slowed down? Here you have it:

(Thanks to Mark Kausler and Yowp for their help.) 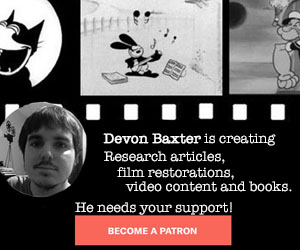