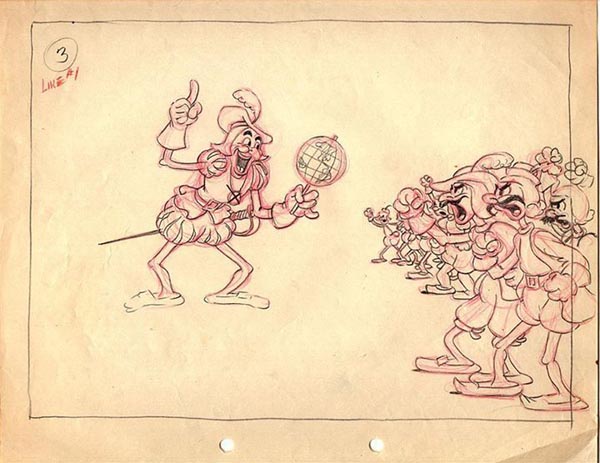 Here is a rare find for this week’s animator breakdown—an animation draft from a 1938 Terrytoon (the first page, that is!) This will be centered more on the artists credited rather than the cartoon itself. 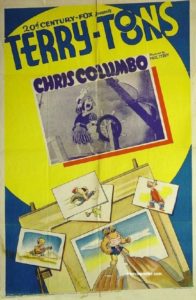 Animator drafts from East Coast studios are relatively scarce, particularly those from the Max Fleischer cartoons and Terrytoons. In the case of Paul Terry’s cartoons, many of the available drafts are from the early sound period spanning from 1930 to 1931—while no other documentation from different eras seem to exist from the studio. Luckily, a listing from a Heritage Auctions item revealed the first page of a draft from a 1938 Terrytoon, Chris Columbo, mislabeled as a “shooting script” for Chris Columbus Jr, a 1934 Oswald the Lucky Rabbit cartoon produced by Walter Lantz.

The other page for this draft is missing, or perhaps the scene assignments were written on the reverse side of the paper. This proves more troublesome for this post, since it constitutes one half of the film, and identifying Terrytoons animators properly can often be a challenge. A small number of the scenes identified throughout the rest of the film in the breakdown video rely on educated guesswork.

The year 1938 marked some milestones for Paul Terry’s studio. After several attempts in creating star characters besides the long-running Farmer Al Falfa, such as Kiko the Kangaroo and Puddy the Pup, an effeminate goose with an Ed Wynn-esque voice made his debut with Gandy the Goose. Gandy soon became paired with a grumpy cat named Sourpuss, patterned after Jimmy Durante, in a number of cartoons starting in the early 1940s, while he occasionally starred in his own solo shorts. It also marked the first Terrytoon in color — String Bean Jack, released after Chris Columbo.

Though circulating copies of this film are missing the main titles, Eddie Donnelly is credited for directing Chris Columbo. Donnelly was a published illustrator and newspaper cartoonist for The New York World before entering animation at Fables Pictures in 1923. When Paul Terry and his head animator Frank Moser left producer Amadee Van Beuren to form their own studio in the Bronx around 1928, Donnelly stayed with Van Beuren as an animator, primarily on their Aesop’s Fables series. By March 1932, he moved to the West Coast to join Walt Disney’s studio as an animator.

A year later, he returned to Van Beuren, presumably due to salary reductions enforced onto the staff if new arrivals, including Donnelly, were terminated. After a brief stint there with at least two directorial credits (Galloping Fanny and Croon Crazy, with Cubby Bear), he moved to Paul Terry’s studio as an animator and became one of their principal directors by 1938. He directed several Terrytoons until the mid-1950s, when he was credited only as an animator after CBS bought and acquired the studio. Despite this, Donnelly stayed with CBS-Terrytoons until the early 1960s. 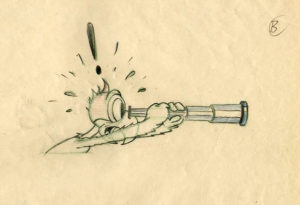 The draft’s first page for Chris Columbo also serves as an indicator of Terry’s roster of animators during this period. Among the artists credited on this page are Carlo Vinci, Gordon Whittier (credited as “Whit”), John Gentilella (“Gent”), Ralph Pearson, George Cannata and Frank Little. Many of these credited artists moved to Famous Studios during the early 1940s—Gordon Whittier (in Myron Waldman’s unit), Frank Little (in Orestes Calpini’s crew), and John Gentilella, most renowned for his brilliant character animation on the Popeye series.

As for the artist credited as “Collier,” there is an ambivalent circumstance—Thurlo and Theron Collier were at Paul Terry’s studio at the same time during this period, though it is not noted which Collier was given designated scenes in the draft. The two worked in animation at least through the early 1960s, mostly for small industrial or commercial shops from the 1950s onward. Their father Nate Collier, an established newspaper and magazine cartoonist, first went into the business in Cleveland, Ohio where he worked on animated advertisements in 1916. From there, he animated for International Film Service on their comic-strip adaptations (Happy Hooligan, Katzenjammer Kids and Jerry on the Job) from 1917 to 1919, and moved to the Jefferson Film Corporation, working on the Mutt and Jeff cartoons around 1921. He moved to Paul Terry’s Fables studio in 1922, but left a year later to continue his illustrative career. 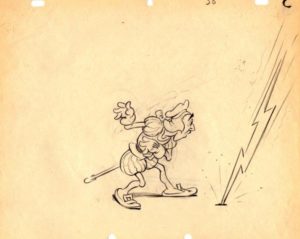 George Cannata, credited on a few scenes in the film, had an extensive career in animation. Cannata started at Pat Sullivan’s studio as a blackener in the 1920s, and moved to Max Fleischer’s studio where he was promoted as a full animator by 1930. He moved to the West Coast, where he worked for Walter Lantz and Ub Iwerks, but returned East to work for Van Beuren during a short period in 1935, after which he left to animate at Paul Terry’s studio.

During the early 1940s, Cannata traveled back and forth between different brief stints; he migrated back West to animate for Disney, which he grew to detest, so he trekked East to resume animation for Terry. He left Terry and traveled back West to work for Warner Bros. (credited for at least one title, Frank Tashlin’s Swooner Crooner). He soon went East to work at Famous Studios, once in 1944 and again in 1950. In addition to his animation career, Cannata also freelanced for The New Yorker in 1954. In the late 1950s, he was an employee of several commercial and industrial film studios such as John Sutherland Productions, Ray Patin and Robert Lawrence Productions. He went into television animation by the late 1960s, where he worked on the Steve Krantz/Ralph Bakshi-produced Spider-Man series in the late 1960s and Pantomime Pictures’ Skyhawks and Hot Wheels. In the early 1970s, Cannata moved to Hanna-Barbera as an animator before his death in 1978.

Enjoy! Keep in mind—whatever animation could not be identified is left blank in the video. While the low resolution of the video source may not help much, it is fortunate we are able to watch these in any accessible form. Here is a YouTube channel of Terrytoons in chronological order (but incomplete, as of this writing) for uninitiated newcomers and animation buffs. 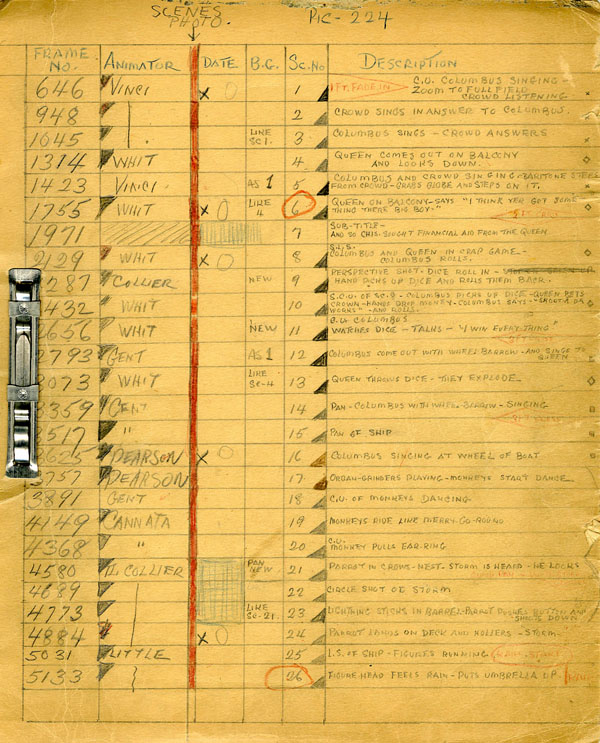 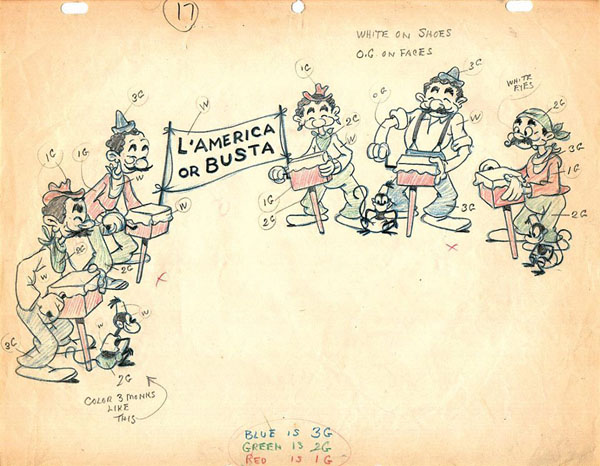 Admittedly, something I haven’t necessarily been consistent with was to remind readers about the donations over my current financial situation. However, it’s in my best interest to put others before me.

Cartoonist/animator Milton Knight, one of the foremost experts in East Coast animation and “funny animal” comics – and an occasional Cartoon Research contributor – has recently been evicted from his home and is in desperate need for your help. Go to his GoFundMe page for more details…be sure to lend a donation of your choosing or to spread the word around for others to see!

(Thanks to Charlie Judkins and Milton Knight for their help.)

DEVON BAXTER is a film restoration artist, video editor, and animation researcher/writer currently residing in Pennsylvania. He also hosts a Patreon page, where more of his work related to animation history can be seen.