“Hey— look, fellas, I’m a hare-plane!” Travel with Bugs Bunny to Baghdad in this cult classic from Bob McKimson… 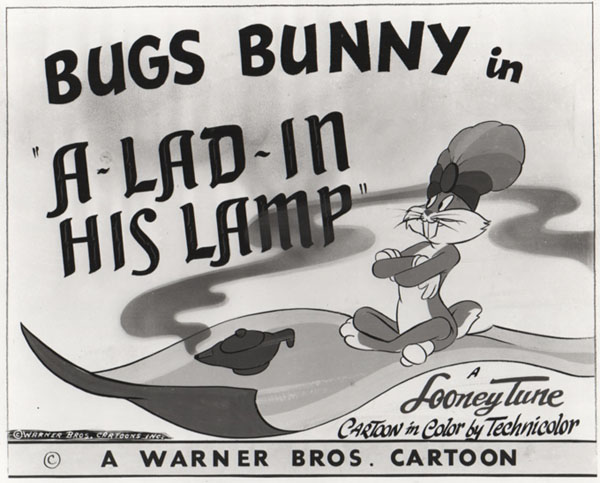 In a letter to author Graham Webb (The Encyclopedia of Animated Cartoons), Bob McKimson stated, in an air of satisfaction, that he was the first animation director to hire radio actor Jim Backus before his success as the voice of Mister Magoo for UPA. McKimson modeled the Genie, whom Bugs calls Smokey (derived from studio cameraman/projectionist Hank “Smokey” Garner) after Backus’ millionaire playboy Hubert Updike III on The Alan Young Show. When Smokey emerges from Aladdin’s lamp, he announces: “I’m here! I’m here!” similar to how Updike would make his presence known on the radio program.

Other catchphrases from the The Alan Young Show were borrowed for A-Lad in His Lamp; when Smokey introduces himself with a quip to Bugs Bunny, he remarks, “That was a witty one!” followed by a conceited, hearty laugh. In the following scene, Smokey claims “I’ve got millions!” in terms of granting wishes to Bugs, comparable to how Updike would brag about his riches. (Here is an example of the parallel between Hubert Updike III and Smokey the Genie.) The recording session between Mel Blanc and Jim Backus for A-Lad-in his Lamp occurred on October 5th, 1946. Around the same time the dialogue track was recorded, Backus appeared as a weekly regular on Mel Blanc’s own starring radio program—which aired on CBS from 1946-47—where he played the egotistical womanizer Hartley Benson.

In this cartoon, McKimson assigned two principal animators to the first half of the film, with Bugs in the woods, and the second half, set in Baghdad, to the remainder. Bob’s brother Charles McKimson animates the opening scenes of Bugs finding Aladdin’s lamp buried underground, and, as with many of his cartoons, he is given much of the tight close-ups of Bugs throughout the film. Manny Gould, the dominant animator of the film, handles the extended sequence of Bugs meeting Smokey, the “Genie with the Light Brown Hare” in perhaps his finest work for McKimson. In scene 4A, Smokey the genie appears out of the lamp, and announces his arrival, in Gould’s trademark usage of exaggerated arm flailing and hand gestures. Gould also accentuates the character acting within Bugs’ reaction—first, in awe of the mythical spirit, then grows annoyed as Smokey continues his showy introduction, and pulls on his vest to bring him closer.

The sequence further displays Gould’s strengths as an animator when Bugs is denied several wishes before he can articulate them. In the third instance, Smokey answers, “Oh, heavens to Gimbels, NO!”, another catchphrase obtained from Backus’ Hubert Updike character. Scene 8, staged in a low angle, also uses hand gestures for Bugs and foreshortens them close to the camera. He also animates Bugs throwing his two newly acquired carrots aside, as he inadvertently wishes for a journey to Baghdad, which Smokey grants by placing him inside of the lamp. In a nice comic touch, Bugs pops his head out of the lamp, with an indignant expression, before Smokey encloses the lid. Manny Gould’s animation raised the vitality of McKimson’s cartoons in the late 1940s, but it did not last long. He departed the studio for Jerry Fairbanks Productions by the fall of 1947, before the film’s release.

Phil De Lara animates the first scenes of Caliph Hassen Pheffer (to add further to the amount of rabbit-based puns in the film) reclining comfortably in his royal palace, as he smokes a hookah. De Lara continues to handle the sequence, with Bugs’ crash-landing onto the Caliph and his refusal to give him Aladdin’s lamp. When Bugs attempts to enlist Smokey to help fight the Caliph, he interrupts his bath (by Phil De Lara), his supper (by Charles McKimson) and his conquest with a female genie (by John Carey). These intrusions on Smokey the genie are strikingly equivalent to such a motif in the Fleischer Popeye two-reeler Aladdin and his Wonderful Lamp (1939), though, not as uncouth; the genie in the Fleischer film is summoned in the midst of a shave, roused from his slumber and interrupted while enjoying an ice cream cone.

De Lara animates the Caliph obtaining the magic lamp from Bugs, laughing with youthful exuberance, catching his breath before rubbing it, only to face the onslaught of Smokey’s fury from being beckoned much too often. Fred Abranz is listed in the production draft for animation on the ending scenes, with Bugs’ last wish. As with all of his work for Warners, he is not credited among the other animators during the main title sequence. Recent evidence has surfaced that Abranz was promoted to a full-fledged animator in Bob Clampett’s unit by late 1944.

It is not known when the orchestration was recorded for the film, though it has been indicated that it occurred a year after the film started production in November 1947. Carl Stalling uses a mixture of Middle Eastern and Asian-flavored tunes for A-Lad-in his Lamp, mostly from the early 20th century, which no doubt stemmed from his background as a theatre organist at movie houses during the 1910s and 1920s.

J. Bodewalt Lampe’s fantasie characteristique “A Vision of Salome” plays underneath the opening main titles and is heard extensively during the establishing scenes of Baghdad. Two compositions by John W. Bratton (best known for The Teddy Bear’s Picnic) are used in the film; “In a Pagoda” plays during the first meeting between Bugs and Smokey the Genie, and a fast-tempo, rousing version of “The Star of India” is used during Bugs’ ride on a motorized flying carpet. A brief fragment from Guillaume Vargas’ “The Spirit of the Nile” can be heard when Smokey mentions his fabulous estate in Baghdad to Bugs. The cue sheet for this cartoon—approved a month later on December 23, 1947— lists another Arabian-themed cue composed by Theo Bendix, “Bluebeard and Fatima,” which plays when Bugs repeatedly tugs on the Caliph’s beard.

In examining the production draft for Bob McKimson’s A-Lad-in his Lamp, note that many scenes are excised from the final film—more so than other drafts shared on this column from the director. The cartoon may have been intended as a more elaborate production. Due to decreased budgets in the Warners cartoons, the material had to be omitted. The diminishing funds for animated short films, which affected many animation studios, occurred after the Screen Cartoonists’ Union was granted a 25% pay increase for all artists in 1946, which stemmed from grievances over lower pay wages. Bob McKimson and writer Warren Foster’s tactic to overcome these compromises, as the film transitions from Bugs’ woodland surroundings to Baghdad (spelled “Bagdad” in the cartoon), is to show several static establishing scenes of the city, with verbal sight gags—similar to writer Ben Hardaway’s pun-filled opening scenes for Walter Lantz’s cartoons—which amounts to about 55 feet (almost 40 seconds) with no animation.

Near the end of the film, astute viewers might notice a slight editing gaffe when Smokey arises from the lamp, summoned by the Caliph. Before the insert shot of Bugs shouting, “Sock im’, Smokey!”, the previous shot ends a few frames too late, when Smokey is ready to lunge and beat the Caliph “to a pulp.” The same few frames of Smokey and the Caliph repeat after the insert shot of Bugs. These two insert shots of Bugs are not listed in the draft—it might be the work of Phil De Lara, who animates the scenes with Smokey and Caliph in the same sequence. Based on the drawing/movement of Bugs in previous scenes by De Lara, his credit is inserted into the breakdown video.

Special thanks to Cartoon Research reader Ian Soden who sent us this scan of the draft (below). Note the alternate working titles, which are crossed out: “Genie’s Lite [sic] Brown Hare” and “The Fair-Haired Hare”—the latter of which became the title of a Friz Freleng cartoon released in 1951, with Bugs Bunny and Yosemite Sam.

Enjoy! Next Week is another Silly Symphony entirely appropriate for the summer months…

(Thanks to Ian Soden, Thad Komorowski, Keith Scott, Jerry Beck and Andrew Gilmore for their help.)