Sam Singer and Hanna-Barbera’s “Sinbad Jr.” on Records
In His Own Words: Bob Clampett Talks About Robert McKimson
BAXTER'S BREAKDOWNS October 12, 2016 posted by 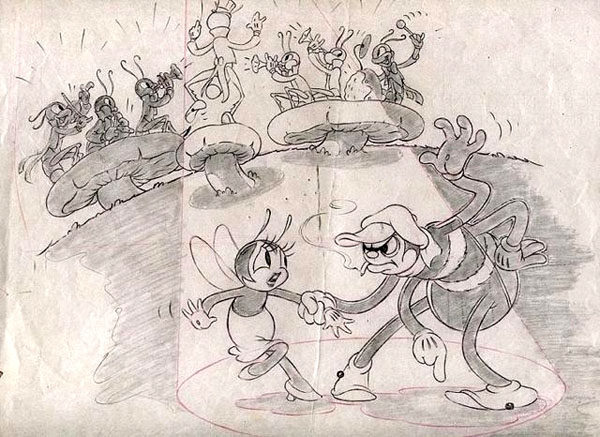 Everybody’s truckin’ on down with this week’s breakdown, with one of my favorite Silly Symphonies!

Development for “Bug Cabaret,” the working title of this film, occurred around March 1936, with Bianca Majolie as the story director. Majolie, a classmate of Disney’s in high school, was the first woman in Disney’s story department, hired in February 1935. During her time at Disney’s, she contributed to different subjects for Silly Symphonies, which never make it past story development, including Ballet des Fluers, Goldilocks and the Three Bears and Japanese Symphony. Woodland Café was one of the few with Majolie’s involvement that surpassed these preliminary stages. 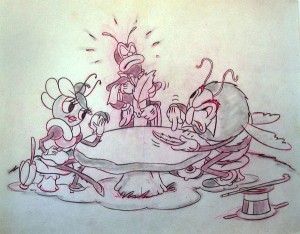 The film went into layout by summer 1936, as drawn by Terrell Stapp and John Walbridge. By the time of this film’s production, Disney’s cartoons were increasingly sumptuous in their appearance, as they continued production on Snow White. Stapp and Walbridge later made significant marks in Disney’s features—Stapp drew the layout of the Prince’s castle in the final scene in Snow White, and Walbridge designed the Chinese mushrooms for the “Nutcracker Suite” in Fantasia. Wilfred Jackson served as the director on this film, supported by a strong cast of animators.

The recurring guests inside the café are a grumpy bee with a female red ant, resembling William Randolph Hearst and Marion Davies. Their scenes are animated by Izzy Klein, a seasoned New York animator who worked at International Film Service (animating characters from Hearst’s newspapers) and Barre-Bowers in the teens. He left animation to become a free-lance cartoonist in the mid-‘20s, but returned to animation at the Van Beuren Corporation in the early ‘30s. He left for the West Coast to work for Charles Mintz, before joining Disney in 1936, under the recommendation of head story artist Ted Sears. He soon left Disney and went back to New York, working for Paul Terry, and helped create Mighty Mouse, the studio’s most durable character. 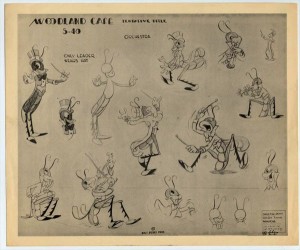 The middle of the film consists of a floor show, depicting the Apache dance as it originated in the Parisian slums during the late 19th century—a street-tough spider spots a naïve female fly, who retaliates against his domination over her. In a fascinating turn, the fly wins against her captor, tangling him in his web, and she takes his place underneath the lamppost. Dick Lundy animates the entirety of this sequence, which lasts about two and a half minutes. The sharp timing in Lundy’s scenes is exceptional, especially under the hands of a detail-oriented director as Jackson; in a subtle musical touch, after the spider takes his strides, grasping the fly by her antenna, the sharp violin notes accompany his movements and her dangling is accompanied by small woodwind sections. Lundy also animates scenes of the grasshopper jazz band, as the Cab Calloway-esque bandleader demonstrates “truckin’.”

Ward Kimball, in one of his earliest solo assignments, animates the final montage sequence in the film. Kimball’s scenes perpetuate an exuberant energy, showcasing his fast timing accompanied by the jazzy musical track, which accentuates the motions to great effect. The scenes with the grasshopper slapping on the bass fiddle appears to be cyclical animation, yet the character’s body (and instrument) leans from right to left, as he taps his foot, brings his hand closer toward the camera and tosses his head back and forth. In the following scene, Kimball uses a smear effect as the bandleader sets each foot down to a bouncy step, as he balances his baton on his finger and waves his top hat. Kimball also animates the quick flash cuts between the brass section and the cymbals, resulting in a musical explosion as the film irises out.

Cy Young is credited on effects animation for this film, including the dazzling effects of light reflections from a clover blossom illuminated by fireflies, and the dandelions slowly dropping down like balloons, as the insects dance on the ballroom floor. Young is also credited on a few sequences with character animation—he wasn’t strictly an effects artist, having animated on his own film, Mendelssohn’s Spring Song (1931), which featured insects dancing to the aforementioned musical composition. (Since the film’s actions encompass much of the space needed for these spectacles, some of Young’s effects credit alongside the listed character animator is omitted from the video to avoid overcrowding.)

Musical composer Leigh Harline uses a small selection of popular hit songs for the soundtrack to Woodland Café—usually reserved for original compositions in the Silly Symphonies. The first tune played by the grasshopper jazz band is Euday L. Bowman’s ragtime standard “Twelfth Street Rag,” performed in big band fashion. During the finale of the film, the band performs Ted Kohler and Rube Bloom’s “Truckin’,” from the Cotton Club Parade revue, introduced a year before the film’s production. A butterfly ballet was intended to be the centerpiece of the film, but was removed, with the Apache dance — from Offenbach’s ballet Le Papillion — assumedly to better complement the earthy, contemporary elements in the cartoon.

Some dissimilarities in the draft for Woodland Café are enigmatic, and in some cases, don’t reflect the finished scenes in the film. The artist credited as “Byrne” in the draft may be either Tom Byrne or Charles Byrne, who were both brothers that worked in the animation business. No credits for Tom’s work have surfaced during this period for Disney, and Charles had worked for the studio in the early ‘30s. No evidence from the exposure sheets have been examined—however, on the strength of his previous credits, Charles is credited for his scenes on the video.

There is some re-used animation during the “Truckin’” finale, credited to other artists in the draft; for instance, scene 96A, credited to “Byrne,” is actually a Kimball scene—fielded in a tight close-up—intended to occur later in the cartoon (scene 105). Similarly, scene 97 is credited to Jack Hannah, but is actually lifted from an earlier Lundy section (scene 91), with re-dubbed dialogue; this practice is also carried to scenes 103B and 103C, which have no animator credit—they are both Lundy scenes, with dialogue re-dubbed.

Many of the Disney cartoons I’ve written about are from the Silly Symphonies, and not many starring its main stars Mickey Mouse, Donald Duck and Goofy. A large majority of the drafts from the Mickey Mouse cartoons released in the 1930s, as well as a select few Donald Duck entries from the mid-‘30s — Goofy and Wilbur included, as well — have already been shared on animator/historian Hans Perk’s blog. It wouldn’t be fair, or make much sense, to create a breakdown video of what is readily accessible. Many Disney cartoons from the 1940s and 1950s, starring Donald and Goofy, aren’t available to me at the moment, and as far as I know, aren’t available in copies from collectors, as many of these drafts are. The Disney Archives houses these documents, but gaining access to their holdings is a venture that may have to wait for a while. For now, I hope you all appreciate what I have to share.

Enjoy! (Check out the description for scene 94—it’s just great.) 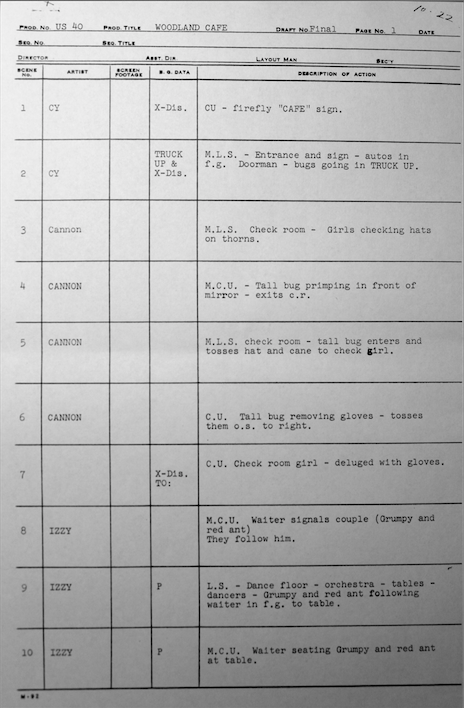 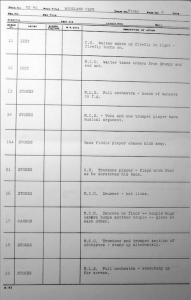 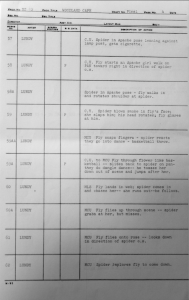 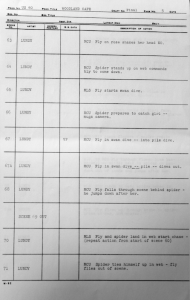 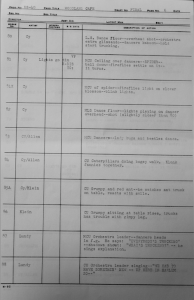 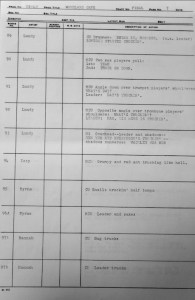 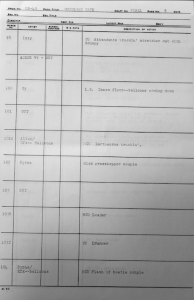 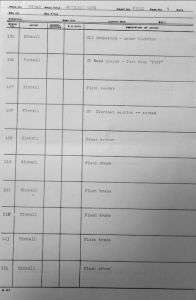 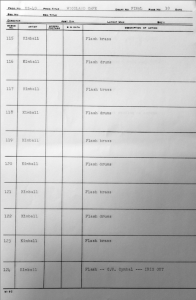 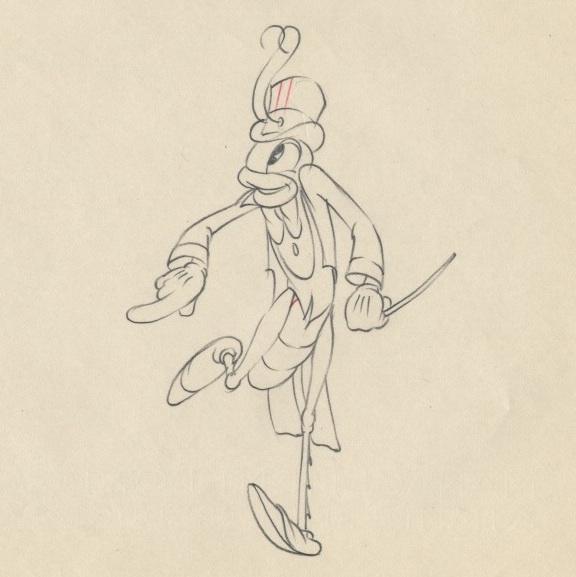 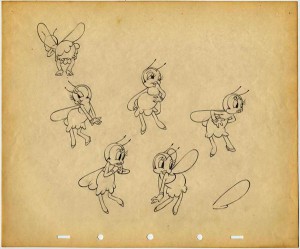 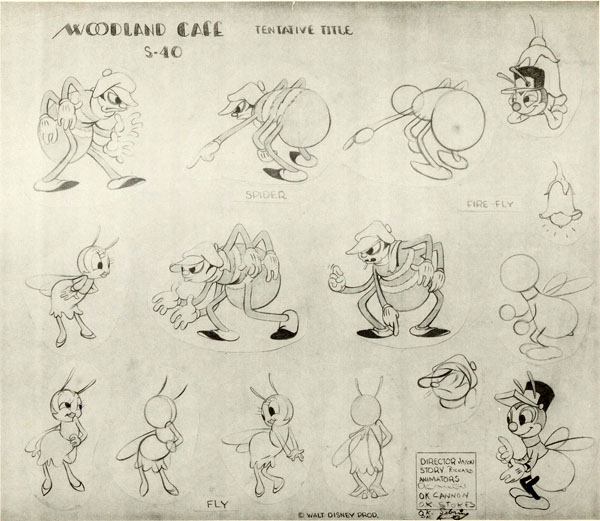 (Thanks to J. B. Kaufman and Didier Ghez for their help.)