In His Own Words: H.T. Kalmus on Disney in Technicolor
Merrie Melodies 1940-41: The Care and Feeding of a New Cartoon Star (Part 1)
CARTOONS ON FILM July 20, 2020 posted by Tommy Stathes 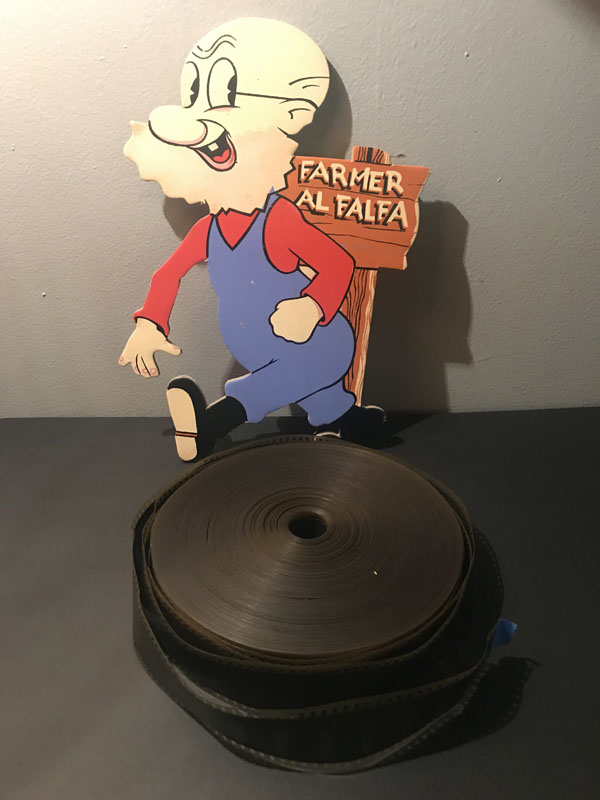 Here in New York City, we’re smack dab in the middle of one of our signature summers of ample heat and humidty—two atmospheric things that relate perfectly, for better or worse, to both exciting Cartoon Research-esque updates I’ll be sharing with you today! One bit of news is the recent find of a rare silent cartoon in an original 35mm nitrate print…and I’ll save the best for last.

Last month’s Cartoon Carnival live stream featured an oddities theme that proved to be both fun and surreal. Life definitely continues to be odd, to say the very least, and many of our friends and neighbors are now in a tug-of-war battle over the issue of continuing to quarantine at home, versus making some of their usual summer travel plans. Take it from a New York City pandemic survivor: safety comes first. Nevertheless, one thing I’m sure we can all agree on is that classic animated cartoon shorts, as a form of escapism, take us on little trips and vacations of their own. One thing we can all do right now is ‘venture’ out and about, through the windmills of our minds, with the help of a new selection of 16mm cartoons from the Stathes Collection.

Cartoon Carnival 93: Get Out! will take place this coming Saturday, July 25th, at 3pm eastern time (12 noon on the west coast). Gotta catch it in real time if you would like to watch! This is yet another selection of silent era favorites of mine, such as Felix the Cat, Farmer Alfalfa, Bobby Bumps and Koko the Clown, as well as a few later Golden Age goodies thrown in for good measure: Betty Boop, Bimbo, Daffy Duck, Casper the Friendly Ghost, and even Fleischer-era Popeye. They’ll go gallivanting out there in their usual animated trials and tribulations, so you won’t have to. This is probably the only summer in our lifetimes where no one should feel ashamed for living vicariously through cartoon characters. As I often say to the crowds at some of my New York City shows, anyhow: “Pat yourselves on the back, people. It’s a beautiful sunny day out there, and you’d rather be huddled in a cramped, dark room watching 90 year old films!”

You can take part regardless of geographic location. Visit the new Online Cartoon Carnival page for more information and even some of our past streams as new Video On Demand viewing options. The ticket purchasing/stream viewing link for Saturday’s upcoming show is here. Make sure you’re on our mailing list here if you would like to receive regular updates about these shows.

ONCE AGAIN – BY POPULAR DEMAND:
Behind The Scenes: The Making of my Cartoon Carnival Posters

1. Cut out fun images of your favorite cartoon stars 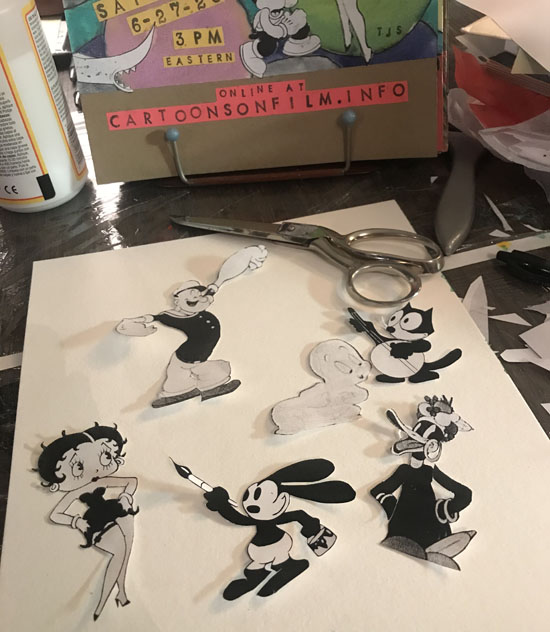 2. Lay them out on top of some really cool back drops – vintage wall paper or gift wrap is best 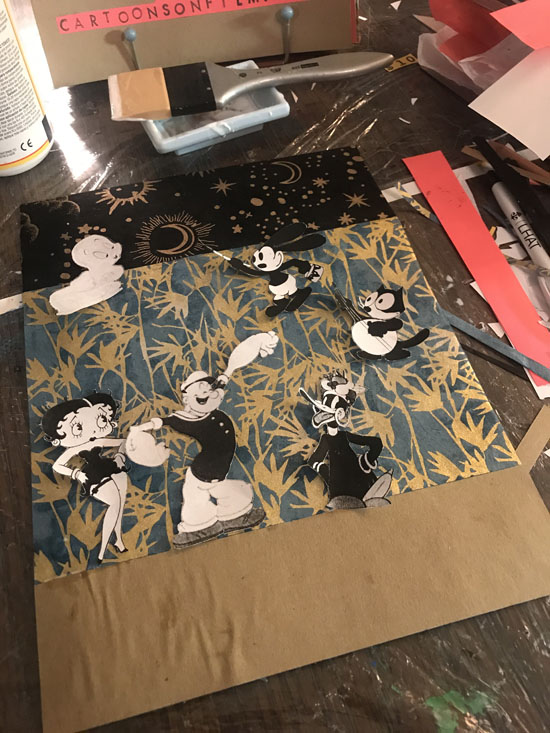 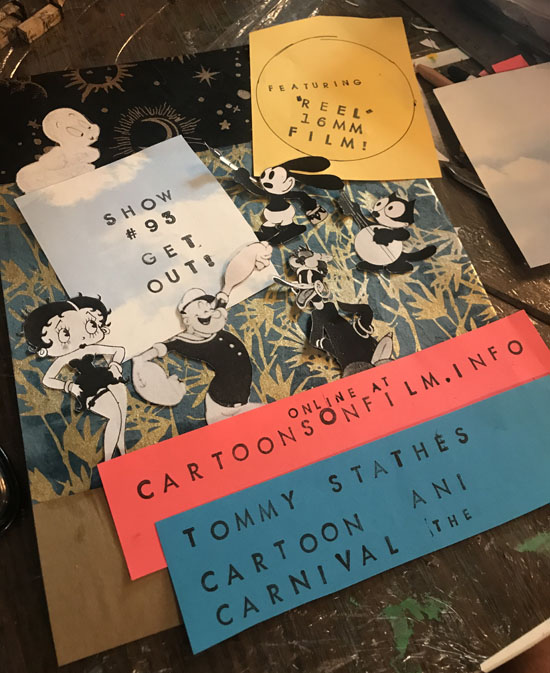 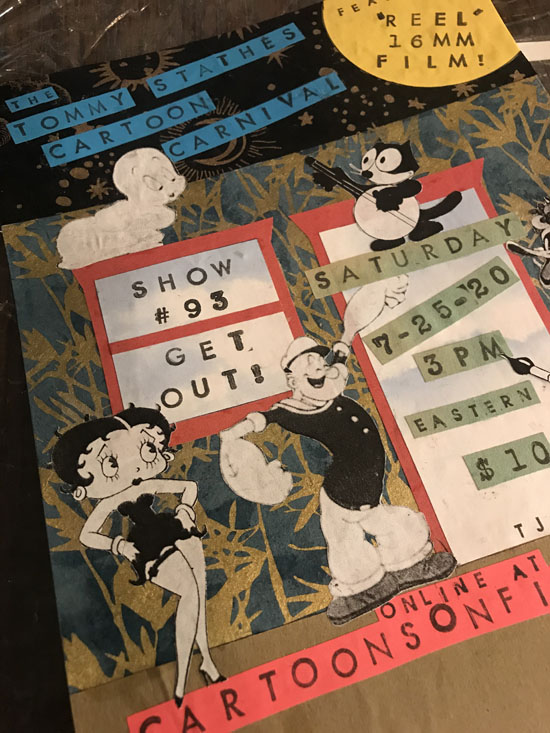 Now, for the extra fun part of the post. Last week, colleague Thad Komorowski alerted me to the sale of what appeared to be an original 35mm print of a very late silent era Paul Terry Aesop’s Fable cartoon, Sweet Adeline (1929). Not having this title in my archive at all, and especially since I sometimes use 35mm prints as source material for restorations (when extant/available/accessible/affordable!), I naturally desired to acquire it for such purposes. I do have plans to produce new restorations and re-releases of a good number of silent Aesop’s Fables cartoons, mostly including Farmer Alfalfa, when time and funds allow. But not so fast on this newly-surfaced 35mm print.

It seems someone alerted the seller that film could be a nitrate print. For those who don’t know, simply do some searches on “nitrate film” and you’ll get an idea of what this all means. In this particular case, this news sent the seller into the panic, who immediately pulled the sale out of fearing possible damage to his home, family, or getting into trouble by shipping such material. Thankfully I had already made contact with the seller and was in discussions with him at this point, and was incredibly anxious to learn that he almost preferred having an immediate bonfire in his backyard to rid himself of the possible headache. Low and behold, my friend and fellow early film enthusiast, film handler and traditional 35mm photographer Louie Despres, of Massachusetts, lives just an hour away from where this film was residing in Rhode Island. Without hesitation, Louie graciously offered to take a prompt drive on my behalf, and the seller agreed to a sale as long as the film could be removed from his premises as soon as possible. Only a couple of hours later, the deed was done. Long story short, this fine original print is now already in my hands. It’s got some splices and a little bit of wear, but appears to possibly be complete and seems to have zero nitrate decomposition. Whew! 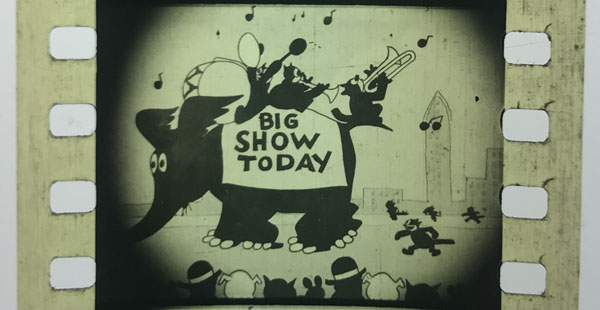 This fun and useful find brings many things to mind. The first is that 90 or 100 or more years later, it’s still entirely possible to find original prints of films like this in the wild. If all basements, attics, barns, and lofts could be searched right now, imagine what lost films we would finally be able to reinstate into our collective awareness of film history! Second, this material is at the mercy of time, atmospheric conditions, and whoever happens to be handling it at the moment. Few individuals or institutions are absolutely perfect film handlers or archives, and I’ve got many of my own shortcomings to surpass. But, imagine for a moment that this print might not exist today if the previous owner had actually gone through with a knee-jerk ‘accident prevention’ plan by literally destroying the thing. Based on some quick research, it appears the Library of Congress has had at least a 35mm nitrate print of this title for decades now, if not any preservation prints. But, I don’t know offhand what their element is like, and this one could very well serve as perfectly good source material for a restoration if it proves to be complete. It’s also good for there to be multiple prints out there in the world. My 16mm, 28mm, and safety 35mm print holdings continue to grow with each passing year, but rest assured that the nitrate films I occasionally acquire are usually destined for places like the Library of Congress, where I’ve already put quite a few past finds.

In a way, this find reminded me of Steve Stanchfield’s recent Cartoon Research post regarding the question of which cartoons you’d like to see better copies of. Sweet Adeline is far from my first foray into nitrate print collecting, and I figure at least two or three dozen such things have passed through the archive here; either still on hand or having since been deposited with an institutional archive for proper safekeeping. Or left with one for disposal, when their condition was too far gone.. Some of the titles that folks listed in the comments are items that have been here at one point or another in 35mm form, either as nitrate or later safety prints: Koko the Kop, Farmer Alfalfa’s Ape Girl, Mr. Gallagher and Mr. Sheen, among others. The kinds of items that will hopefully get used, at some point, when the time and situation are right…and no, not for quick YouTube uploads. Sadly, these are not items that could be screened as part of the monthly Cartoon Carnivals—at least not until 16mm prints can hopefully be made at some point. Someone mentioned the Fanny Zilch Terrytoon, The Banker’s Daughter (1933). I’ve got an ancient 16mm print with original titles, but it’s a silent print!

Here’s one final ‘teaser’ before I go. This bit below is one of my all-time favorite animation history-related bits on YouTube—and while the spoof official 50th anniversary home videocassette release in question never came to fruition, it’s thankfully one of the many films currently waiting on the sidelines for a brand new restoration from 35mm elements for a brand new Blu-ray release. In the meantime, you’ll be able to see a vintage 1940s Kodachrome 16mm print during next week’s 16mm cartoon stream. The Tommy Stathes Cartoon Carnival is a safe space for dear old Molly Moo Cow, regardless of what anyone else thinks of the character. MOO-hoo!