First and foremost, I’m wishing all Cartoon Research friends as happy a holiday season as you could possibly be having this year. Here’s hoping that with any luck and proactive change, the year ahead may be at least a slightly better one. In the meantime, however, perhaps you’ll cheer up with some news that the Cartoons On Film release label has a belated holiday gift for you all! Be sure to read all the way to the end, where I’ll also be sharing a few other updates, as well.

When the original Cartoon Roots Blu-ray/DVD combo was first released some six years ago, it was an exciting moment for me, personally. The home video collection was met with much support from colleagues and audiences alike. While I did not know where this new path of high definition early animation restorations and Blu-ray productions would ultimately lead, I did know one thing all along: this was an important next step in furthering a very long-term goal I’ve always had as an early animation historian and archivist: to not only find more neglected and previously-lost cartoons from the early days, but to do something bigger and better with them than simply watching and keeping them purely for my own personal purposes.

In always having a personal preference for silent era animation, it may go without saying that one of the many foci in my archiving activities has long involved a certain famous cartoon cat from that particular period of film history. By and large, most historians and fans would argue that the two most popular and critically acclaimed cartoon characters from the 1920s, more specifically, were Felix and Koko. 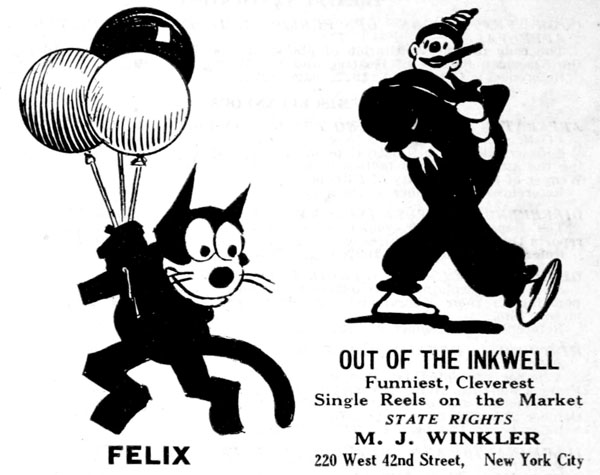 With Fleischer’s clown came newfound ingenuity in animation production techniques through rotoscoping, initially. Fleischer’s Inkwell films also offered wonderful surrealism in visual narratives and an entrancing interplay between a live-action reality and a cartoon world—both of which would seem inextricably linked for a good 6 or 7 nitrate-based minutes on the glimmering silver screen. A magical world, indeed. However, a little black cat, first named Master Tom, would soon prove that it could offer audiences something that Koko could not.

In time, it’s safe to say that this cat would surpass the animated clown both in terms of contemporary popularity, as well as long-term memorability among the general public. Eventually, as master animator and Pat Sullivan Studio employee Otto Messmer would further develop the cat’s personality and design, and a more likable name for it was chosen—Felix—the reasons for this character’s importance would become clearer. Simply put, a combination of elements contributed to this character’s likability: an endearing design, a fully developed psyche with clearly defined personality traits and motives, and expertly executed pantomimic gestures that express to an audience, concretely, exactly what the character is thinking, feeling, and plotting. A lot of high notes were hit in these silent cartoons, and often more so than was being achieved at other studios and in other series at the time—and with such bold, but simple, graphic qualities. Messmer’s craft could be thanked for a great deal of that success. 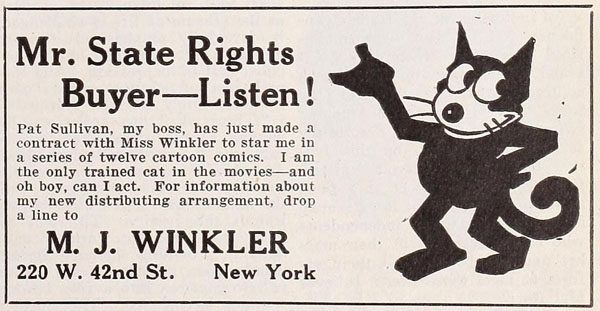 The new Cartoon Roots: Otto Messmer’s Feline Follies Blu-ray/DVD combo chronicles some of Messmer’s early animation work from the late 1910s and through some of 1923. As many readers will know, there’s been controversy as to the issue of who has taken or received credit for Felix’s creation—and who rightly deserves it. While most retrospectives and home video collections of the past have focused solely on Messmer and the Sullivan Studio’s star character, this Roots volume gives some time and space to a few of the pre-Felix films that were created at the Sullivan Studio, prior to Felix, or Master Tom’s debut in Feline Follies (1919). The initial acquisition of these much rarer pre-Felix films, and your ability to see them and study them, offers an unprecedented glimpse into a story that is not exactly so cut and dry, or black and white. In short, some of the pre-Felix films include prototypical black cat characters, and some of these films were animated at least in part by Pat Sullivan, while Messmer was serving abroad in the first World War. By and large, it’s Sullivan’s series of Charlie Chaplin-parodying cartoons of 1918 and 1919 that offer these pre-Master Tom and pre-Felix cat characters for your consideration.

Newly restored title card for a ‘Charley’ cartoon, contained in this new release. Image courtesy of Cartoons On Film.

We’re proud to include two of these ‘Charley’ cartoons in this Cartoon Roots volume. The series’ title cards offer some clues, as you can plainly see. One of these curious cats turns up in Charley at the Beach (1919), which is featured in the collection. 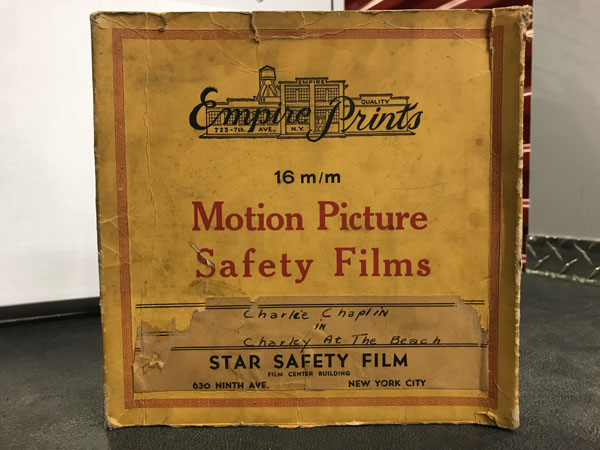 Next, we move onto that milestone Paramount short, Feline Follies. From that point onward we skip ahead a bit (most of the remaining Paramount-era Messmer shorts are thus far lost!) and focus heavily on several of the earliest shorts that were distributed by M.J. Winkler in 1922 and 1923. You’ve been tempted enough as it is already—so, why not have a look at the trailer for this new release before reading further?

The general public is more familiar with some more decidedly refined and stylized versions of the character which would emerge by the mid-1920s and beyond. As you’ve now seen, the period of 1922 to 1923 as represented here gives us a more dedicated focus on the character’s earlier, more fox or dog-like appearance. While later designs may often be seen as more familiar and more endearing to most, a lot of Messmer’s signature craft and charm is fully evident here, and we see the foundation being formed for what would become the first animated cartoon superstar. Regardless of the gray area that was the character’s initial development, one thing becomes obvious and true: it was largely Messmer’s mind and hand that would be responsible for developing this cat, and its amusing narratives, in a way that so many people still love and admire a century later.

It will be up to you to ponder Felix’s merits further, at least in terms of character development and film narrative. When I approach this work as an archivist, my concern centers largely around the age of the films and their availability. How were they handled over the decades, and by whom? Felix turned 100 years old last November, and most readers already know that silent films do not have a promising survival rate. What’s especially true of a large number of the silent Messmer films is the fact that so many of them have fared poorly over the decades, existing or circulating only in poor copies, and with many currently considered completely lost. Formerly unavailable titles do turn up from time to time, and seeing that process unfold is one of the more exciting parts of my work as an archivist. Being able to present these rare films to you in this way is an even more gratifying and fulfilling experience. 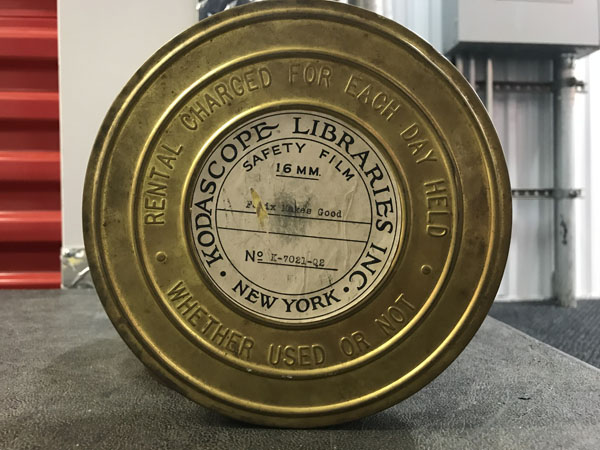 One significant element that has enabled this project is a type of film print that we collectors and archivists lovingly refer to as ‘Kodascopes.’ Back in the 1920s, as the 16mm film gauge was growing in popularity, the Eastman Kodak company founded a rental library aimed at providing consumers with licensed prints of famous theatrical films, and educational shorts, that could now be shown in someone’s home, so long as they had the space and money to either buy or rent a 16mm film projector, and the wherewithal to rent prints for showing at home. Schools, churches, libraries, and other organizations would also partake in these rentals, whereas 35mm projection was more cumbersome, more expensive, and often dangerous, if nitrate film was being used for presentations.

The 16mm gauge really opened up a whole new world of possibilities for non-theatrical film showings, and the incredible thing about the Kodascope Libraries prints is that they were made from 35mm negatives. The resulting quality was stunningly sharp. Some cartoons of the 1910s and 1920s were also given this Kodascope treatment, and that includes a large number of Felix cartoons. These prints are somewhat rare, and sometimes they are quite worn when they turn up. They’re now almost a hundred years old. However, some of them are titles that were never distributed again beyond that point, and the picture quality is often gorgeous, especially if the print is not too worn. I’ve spent the past 15+ years trying to find these kinds of Kodascope prints, and several of them have served as the basis for the restorations in this project. I know you’ll be quite pleased with the results. Some of the films will almost look too good to be true, since we’re used to seeing them in murky, dupey, worn copies…but no, these cartoons really did look perfectly clean and sharp when they were first released, and even when they were first printed in 16mm. 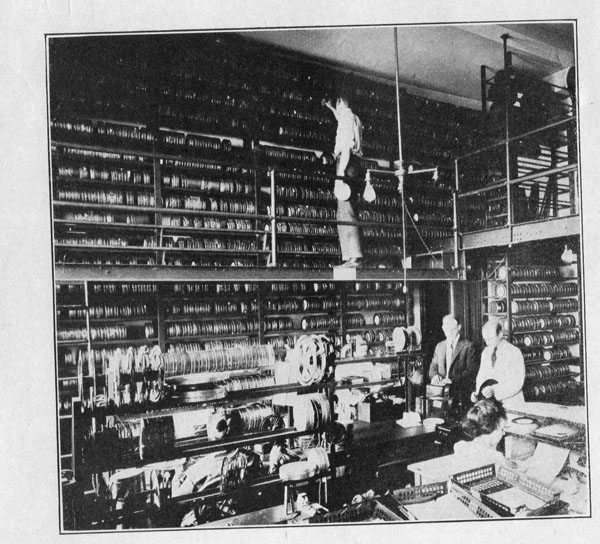 A rare behind-the-scenes look at one of the Pathescope Libraries
and their massive collections of superior film prints.

For an example of what we’ve achieved, have a look at the below before-and-after comparison. You’re seeing a single frame from one of the cartoons in this collection—on the left, the version that most of the general public has seen for decades, after it was duped in an inferior way for inclusion in a 1950s television package. On the right, the same frame from our restored version, which was sourced from an earlier 16mm print that was a few generations closer to 35mm master materials. I think the difference is obvious, and I’m glad an old problem has been corrected somewhat. These cartoons deserve nothing less.

While some of the titles in this new collection are quite rare and generally unknown to others in our circles, some of them are more common titles—but now available in these superior versions. Some of these films have cropped up in many different ways over the years (see 8mm “home movie print” below, of the same short in the image above!) and my hope is that we’ve now presented what may very well be the best possible versions ever…that is, unless original 35mm nitrate prints will still turn up someday. You never know. It’s always possible. 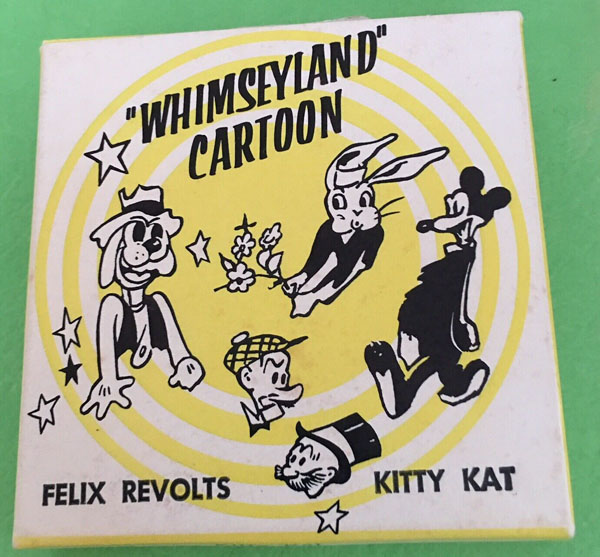 There are many people to thank for their contributions to this project, and they know who they are. You’ll see most of them listed in the video credits and liner notes of this new release. If you like this character, want to see more of this studio’s early films, and want to support restoration efforts such as this, simply buy the collection. It’s now available on Amazon! 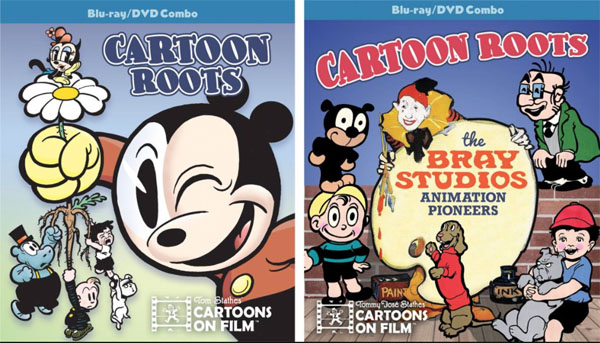 In other *good* news, check it out: the original Cartoon Roots and Cartoon Roots: The Bray Studios—Animation Pioneers collections are now both back in print, after a long hiatus. I’ve also reworked Amazon offerings so that customers can finally batch multiple Roots volumes in a single order, with a combined shipping rate. Finally…watch this space soon, about a couple of weeks from now, for some exciting news about an entirely new Cartoon Roots project in the works. Hint: we’ll need every reader’s help to pull it off. Get ready! 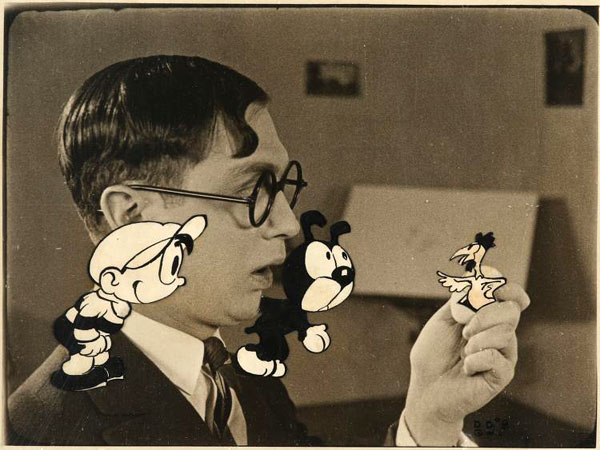 In the meantime, wishing you all a happy and healthy new year ahead.