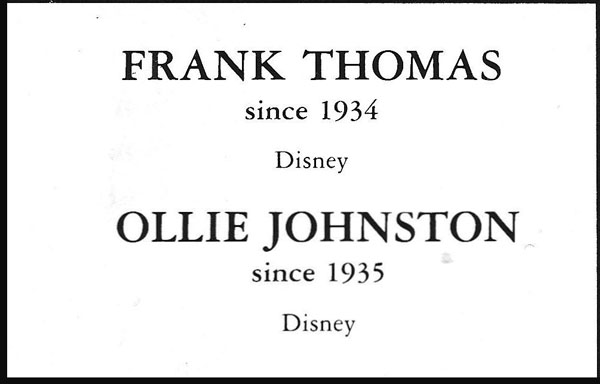 Given their history, Oliver Martin Johnston, Jr. and Franklin Rosborough Thomas would certainly deserve individual posts in this series of interviews by Dan McLaughlin from the Animation Guild’s 1986 Golden Awards Banquet. However, it is also almost inconceivable that Frank and Ollie could be written about other than as a sort of a team. They are also among the few animators who have gained a measure of public recognition, including having been the subject of the 1995 Disney documentary, Frank and Ollie, directed by Theodore Thomas (Frank’s son) and produced by Theodore’s wife Kuniko Okubo.

Johnston was born and raised in Palo Alto, California, where he survived a childhood that was, as John Canemaker pointed out, “riddled with poor health,” the residue of which contributed to his retirement in 1978 (which is when Thomas also retired). He majored in art at Stanford University, where his father was a Professor of Romance Languages. It was there that he became friends with Frank, a fellow art student; in 1934 they both went to Los Angeles to study illustration under Pruett Carter at the Chouinard Art Institute. From there they were both hired by Disney—Frank in 1934 and Ollie in 1935. Johnston told McLaughlin, “I tried out by drawing the Three Little Pigs; each one was a musical instrument, and I was supposed to complete a good inbetween in a half hour. Somehow, by the end of the week, I did that. But I don’t think there was any extra judgment.” Johnston eventually became Fred Moore’s assistant, initially on shorts and then on Snow White, which he said, “was a great learning process. I couldn’t have been in a better spot.”

Ollie became a full animator on Pinocchio, where he did the scene of the puppet coming to life. His work was so good that Walt Disney raised his salary three times before the film was finished. On Fantasia and Bambi, he became a supervising animator; later credits alternate between animator and directing animator on such movies as Cinderella, Alice in Wonderland (Alice), Peter Pan (Mr. Snee), The Jungle Book (Mowgli), and The Rescuers (Rufus, an elderly cat Ollie modeled on himself), as well as episodes of Walt Disney’s Wonderful World of Color TV show, including An Adventure in Color/Mathmagic Land (which Thomas also worked on). Johnston’s last work was on The Fox and the Hound (as was Frank’s).

Thomas was born in Santa Monica but moved to Fresno, California with his family and went to Fresno State College, where he made a popular short film spoofing college life that played in local theaters. Frank then switched to Stanford University where he was a cartoonist for the school newspaper. He noted in his chat with McLaughlin that it was the fact of Pruett Carter stopping teaching at Chouinard that led him and others “to go out and get jobs. There was a Depression going on, but fortunately Walt was expanding his staff. So we all went out there and got employment. And then, [after] we were all hired, Pruett started teaching again. And I always wondered about that, but I don’t think illustration is for me anyway.”

His first animation was done for Mickey’s Elephant in 1936, but he is best known for his feature work, where like Ollie he is variously credited as supervising or directing animator. His credits include Snow White (the Dwarfs crying at her bier), Pinocchio (Pinocchio singing “I’ve Got No Strings”), Cinderella (the stepmother), Peter Pan (Captain Hook dueling Peter Pan), and The Rescuers (Bernard and Bianca).

McLaughlin gets Thomas to talk in some detail about his role in creating the famous spaghetti scene in Lady and the Tramp: “I came on the sequence late and I didn’t see anything that I could really animate in there. Two dogs eating spaghetti didn’t seem like the most romantic thing to draw. I had a couple of dogs and I watched them and that wasn’t the way to go.” However, he discovered some discarded story sketches involving meatballs. So, he asked Erdman Penner, “who had done the story, I said, ‘Why was that thrown out? Did Walt not like it or something?’ And he said, ‘No, I don’t know what he thought, but you could put it back in if you want to,’” which Thomas did. During World War II, Thomas served in the Army Air Corps, making training films for the First Motion Picture Unit at Ft. Roach.

After their retirement, Frank and Ollie were fairly ubiquitous in the animation community, and not just in Los Angeles. I first met them in the fall of 1979, when they showed up at a class I was taking at the University of Southern California; I recall chatting with Frank after class about the problems faced by Disney after the outbreak of World War II in Europe and the recent departure of Don Bluth from the Mouse House. More importantly, they served as mentors for a whole new generation of artists and were even called in by early computer animation studios as consultants (something Frank talks about a bit with McLaughlin).

Beyond these accomplishments, there are their writings, and specifically their book, Disney Animation: The Illusion of Life, which has become a standard text on Disney animation. They also wrote Too Funny for Words: Disney’s Greatest Sight Gags (which was in progress when these chats were recorded), Walt Disney’s Bambi: The Story and the Film, and The Disney Villain.

There is obviously a lot of information out there on Frank and Ollie, but one should probably start with their official website, FrankAnOllie.com. In addition, there’s Charles Solomon’s obituary on Thomas for The Los Angeles Times and John Canemaker’s on Johnston for The Wall Street Journal. Solomon also did a brief but informative interview with the two for Animation World Magazine mostly on Pinocchio; Michael Barrier has posted two in-depth interviews with them: the first done with Milt Gray from 1976 and a second (solo) effort from 1987. In terms of books, there is, of course, Canemaker’s Walt Disney’s Nine Old Men and the Art of Animation.

Harvey Deneroff is an independent film and animation historian based in Los Angeles specializing in labor history. The founder and past president of the Society for Animation Studies, he was also the first editor of Animation Magazine and AWN.com. Harvey also blogs at deneroff.com/blog. 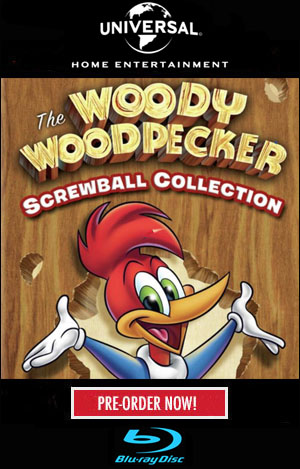