A Rankin-Bass Valentine
Mugzee in “Buzz Saws and Dynamite”
CARTOONS ON FILM February 12, 2014 posted by

It’s almost that time: this weekend, many will be exchanging red cardboard hearts filled with chocolates, cards, and a shared night out on the town. Any holiday, however, is best enjoyed the Tom Stathes Cartoon Carnival way–with early, rare and funny 16mm cartoons screened for the public. If you’re in the New York City area, that’s exactly what will be happening this upcoming Sunday, February 16th. More on that in just a bit.

In fairness to all, for a Valentine’s screening, I like to select a mixture of typical ‘lovey dovey’ romantic cartoons as well as including some with not-so-optimistic narratives, and the occasional tale of unrequited love or even betrayal. I’d like to focus here on one such dark love-related cartoon, which happens to be a childhood favorite of mine and one that I will happily be screening at my upcoming show.

Circus Capers is a 1930 entry in the early sound Aesop’s Fables series. The Fables, initially silent cartoons, date back to 1921, when Paul Terry formed his own studio to eventually produce over four hundred cartoons during the 1920s. Eventually, Terry’s series was produced under his partnership with the new Van Beuren Corporation (1928), and Van Beuren continued on with the Fables, now as a sound cartoon series, after splitting with Terry in 1929.

This entertaining and raunchy, dark short was directed by two old-time and slightly obscure figures in animation. John Foster, born around 1900, dates back to the silent days of the Aesop’s Fables. The second credited director, Harry Bailey, has roots going back to 1913 with the Bray Studios–a piece of information I was pleased to discover as part of my Bray Animation Project research.

Capers is also most notably an example of the infamous Van Beuren’ Mickey & Minnie Mouse rip-off cartoons (click thumbnails below to enlarge). Back in a time when overt copying of rival studios’ characters was somewhat possible, Disney’s famous animated mouse couple endured such treatment. Van Beuren’s rodent copies were decidedly more crude, risque, and raunchy in their behavior, as was typical Van Beuren fare in contrast to Disney’s. Circus Capers is a definitive pre-code Van Beuren classic, in my mind–there’s romance, jealousy, lust, a morbidly obese female sideshow attraction, and adultery, topped off with a bizarre zoom into faux-Mickey’s winking face at the conclusion.

It’s not only a great and dark cartoon for a slightly irreverent Valentine’s screening… this one also happens to be a personal favorite since very early childhood. Capers has a special place in my heart for being part of an old public domain cartoon VHS tape, pictured at right, which was gifted to me by relatives at an extremely early age. I clearly remember wanting to watch the tape, but not yet knowing how to speak well enough to ask for it to be played, so I had to learn how to operate our VCR pretty quickly, which I did. As you can see from the box art, it’s quite interesting that a Van Beuren Mickey & Minnie rip-off was included, as was a Warners’ Foxy cartoon, on a tape featuring Mickey Mouse. And what a cartoon for a tiny tot to be seeing!

Needless to say, I’m glad I was not kept from watching certain classic cartoons because of politically incorrect content. The exposure to such cartoons and my resulting interest in them is what ultimately brought me to work in researching and preserving early animation. For whatever reason, the simplicity and monochromatic charm of the cartoons on this particular VHS tape, as well as a couple silent Felix cartoons on another tape bought at the drugstore, were fascinating enough to fuel my interest in seeing and learning more about these films. The rest is history.

For more info on this coming Sunday’s 16mm Cartoon Carnival, where you can see Circus Capers and many more early cartoons in glorious vintage 16mm film prints, you’ll find the specs over on my blog. Those of you on Facebook would do well to click “Attending” in the show event page as well! Come watch and say hello! 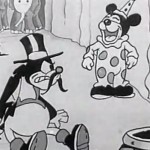 BELOW: For more information on what goes into projecting 16mm film – see embed below
Mickey MouseTom StathesVan Beuren