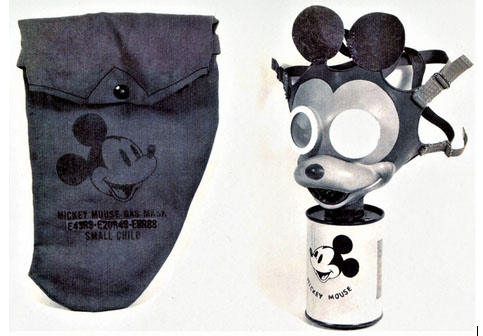 The Mickey Mouse Gas Mask with a cloth carry pouch made by The Sun Rubber Company with the approval of Walt Disney, 1942

On September 3rd, 1939, Britain declared war, along with France, Australia and New Zealand, on Nazi Germany. Fearing the worst, the British government issued 38 million gas masks to its population in anticipation of a possible gas attack during air raids. As the Nazis marched across Europe they invaded France, Belgium, Luxembourg and the Netherlands with Holland and Belgium surrendering in May 1940. The Nazis bombed Paris as Norway surrendered and France fell to Germany. The potential attacks on Britain were real and looming. In August 1940, Nazi Germany launched a bombing offensive against airfields, factories and other strategic targets in Britain. The first air raids to hit central London began on August 23rd 1940. 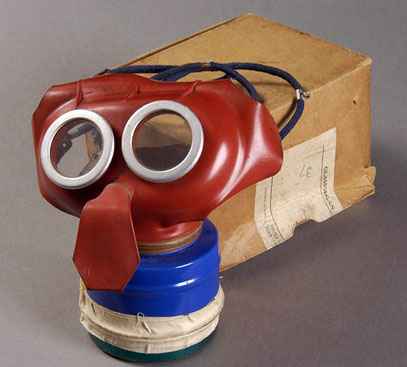 British Government issued child’s gas mask. The design uses bright colors along with a floppy nose element that served only as a decorative devise to add character to the mask. It looked nothing like Mickey Mouse but was still referred as such to soothe the fear in children. Circa. 1940

The issuing of gas masks to every household in the country was a prudent act by the British government. They also designed a gas mask specifically for children which quickly became known as a “Mickey Mouse” gas mask. It looked nothing like Mickey Mouse but as it was explained in a note from the Disney London office: “The name was given to it by [Air Raid] Wardens and others who had the job of fitting them on small children, and the name Mickey Mouse was used to alleviate the fears of any these tiny tots who might be frightened at the sight of a gas mask.” The Disney note was relayed by T.S. Smith, the owner and General Manager of The Sun Rubber Company of Ohio, to Major General William N. Porter, Chief of Chemical Warfare at the War Department in Washington D.C. It was part of a discussion of manufacturing gas masks, including ones for children, for distribution to civilians in the United States. (see footnote 1)

A production version of the Mickey Mouse Gas Mask, courtesy of the U.S. Army Chemical Corps.

The Sun Rubber Company was a manufacturer of consumer goods that focused on educational and recreational toys, office specialties and custom-molded rubber items and surgical goods. The company made face blanks for high-altitude oxygen masks and respirators, corrugated rubber mask tubing, rubber bellows for testing the fitness of high-altitude oxygen masks, grommets for batteries and flashlight equipment, pipeline gaskets, rubber bonded to metal applications, self-sealing fuel cells for airplanes, and they were already manufacturing gas masks for the military. The company ceased manufacturing of rubber toys once the U.S. entered the war. (see footnote 2)

A natural product extension for the company was gas masks, especially for children, and it is clear that there was some correspondence between Disney, Sun Rubber and the War Department on creating an actual Mickey Mouse Gas Mask. As the aforementioned letter went on to point out, “…the use of “Mickey Mouse” has had a soothing effect on the little children in England. Just imagine how much better the reaction would be to the program you have under consideration.” T.S. Smith, the owner of The Sun Rubber Company, first approached Disney about creating a children’s gas mask using Disney characters.
With the support of Walt Disney, The Sun Rubber Company engaged local Ohio toy designer Dietrich Rempel to design a mask in the shape of Mickey Mouse’s head. Bernard McDermott, a product designer at Sun, worked with Rempel to make plaster impressions of many children’s faces in order to develop a universal composite mold design. It took just thirty days to design and make the first prototype of the mask. The production gas masks were made from compression molded rubber according to the founder’s son Richard Smith. (see footnote 3) 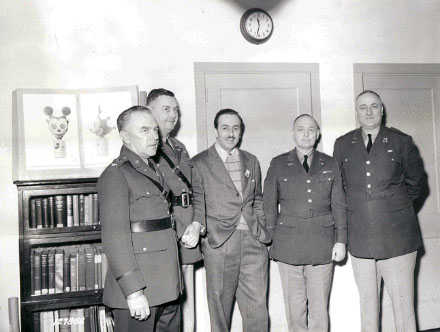 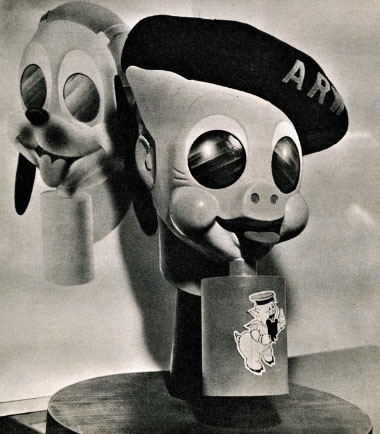 The Walt Disney design drawing for a Pluto Gas Mask and the prototype of the Three Little Pigs Gas Mask made by The Sun Rubber Company. These were never officially approved or manufactured. PIC Magazine, 1942.

As the various participants were trying to gather support to mass produce the Mickey Mouse Gas Masks, Sun Rubber had Rempel design several other gas masks using other Disney characters. There was a Pluto mask designed and a Three Little Pigs gas mask prototype created. Neither was ever mass produced but they did appear in PIC Magazine. The article indicates that, “The exterior of the mask is designed by Walt Disney. It is aimed at keeping the “fun element” in even such grim experiences as gas raids.” Okay, that’s a stretch. The article went on to say, “During these raids children will be persuaded to regard the whole thing as a game. Instead of mobs of morbid, screaming children, we shall have giggling, happy youngsters—blessedly unaware of the poisoned atmosphere which lurks outside their gas masks.” I had to reread that section twice as it was a chilling passage in the article titled THE “REAL THING” WITH KID APPEAL. But, as horrible as that may sound, it is no different than children having to do active shooter drills today. The Three Little Pigs mask is particularly creepy looking with its Army beret adornment. Can you imagine a classroom of twenty or thirty children all wearing that mask and scurrying around screaming? Nightmarish for sure. 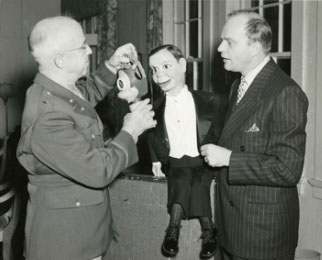 At the outset of the U.S. involvement in WWII, there was a real fear that the country could be attacked on either coast after the Pearl Harbor attack. German submarines, U-Boats, had been spotted in the waters off of Long Island. At the time, New York Mayor LaGuardia proposed that some 50 million gas masks be ordered for issue to citizens living in coastal areas.

Although that quantity was never ordered, a year after the Pearl Harbor attack, there were 300,000 gas masks distributed across the country to personnel at strategic locations. By then, the fear of gas attack had subsided and the thinking among military brass, on both sides, was that a gas attack was ineffective compared to the use of explosives. Bombings destroyed infrastructure and heightened fear in the population. Further, materials were being rationed and the rubber used for that many gas masks was better allocated to other types of military equipment in support of the war effort. 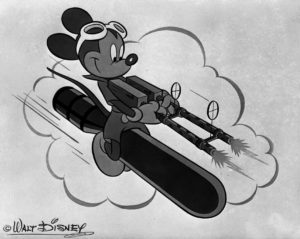 The Sun Rubber Company’s partnership with Walt Disney on the Mickey Mouse Gas Mask blossomed into a license from Disney after WWII ended. Sun produced a series of “molded rubber” figures including Disney animals and fairy-tale characters. In June 1946, Sun Rubber announced that it would produce a full line of Disney character toys for nationwide distribution. Retail stores were stocked with Minnie and Mickey Mouse, Pluto, Donald Duck, Bambi, Dumbo and Thumper Rabbit rubber toy figures in time for the holiday shopping season that year. (see footnote 5)

As ghastly as it seems to produce 1000 Mickey Mouse Gas Masks, today these items may possibly be one of the Holy Grails of Disney collectables. Aside from the couple in museum collections, I only know of one collector that has the Disney themed cloth pouch but no gas mask and another who has just the mask. The only problem with these gas masks is, that after close to seventy years, the rubber oxidizes. This means that the rubber surface begins to crack and changes occur to “the molecules of the polymers that constitute rubber” which causes general deterioration and breakdown of the rubber mask. Yet, still it would be an exceptional Disney piece to have in any collection.

David A. Bossert is an award-winning artist, filmmaker, and author. He worked at The Walt Disney Company for 32-years and contributed his talents to The Little Mermaid, Beauty and the Beast, Aladdin, The Lion King, Pocahontas, Fantasia 2000, Destino among many others and is now an independent producer, creative director, and writer. He is a member of the CalArts Board of Trustees and is a visiting scholar at Carnegie Mellon University’s Entertainment Technology Center (ETC) in Pittsburgh. Bossert is considered an authority and expert on Disney animation history. He co-authored Disney Animated, which was named iPad App of 2013 by Apple and won a prestigious British Academy of Film and Television Arts (BAFTA) Award.

He is also the author of a numerous books including his latest Kem Weber: Mid-Century Furniture Designs for the Disney Studios. Learn more at www.davidbossert.com 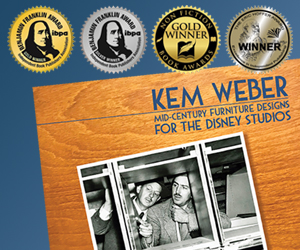