I wrote The Book of Mouse (2013) that featured two chapters on the making of Steamboat Willie and just recently Secret Stories of Mickey Mouse (2018). This being the Mouse’s official “birth date”, I thought this would be good day to share some of my research – in regards to Mickey’s first sound cartoon, Steamboat Willie.

When did Mickey celebrate his third birthday? October 24, 1931. The Los Angeles Times at the time contacted the Disney Studios in Burbank to confirm that fact.

When did Mickey celebrate his fifth birthday? October 1, 1933. Walt told Film Pictorial magazine “that was the date on which his first picture was started so we have allowed him to claim this day as his birthday”.

When was Mickey’s lucky seventh birthday when every available print of all Disney animated cartoons were in use across the country in theaters, cartoonist Floyd Gottfredson drew a special birthday-themed installment of the Mickey Mouse newspaper strip and Guy Lombardo and his orchestra recorded a special fox trot “Mickey Mouse’s Birthday Trot”? September 28th, 1935.

Of course, those dates were all in the earliest years of the Mouse where things were in turmoil and Walt had a small staff and documentation was not as important. So, let’s try an easier one. When was Mickey’s 40th birthday in 1968? September 27th, 1968.

Basically, for over forty years, Disney selected any date from mid-September to mid-November to celebrate Mickey’s birthday in order to encourage theaters to rent Mickey Mouse cartoons for promotional birthday parties and to drive in hordes of children who were back in school to those theaters before the big Christmas holiday season.

Mickey’s 40th was a huge success, unleashing a wave of unprecedented merchandising nostalgia for the original, pie-eyed Mickey. With even more elaborate plans for Mickey’s 50th in 1978 and the hiring of Disney Archivist Dave Smith in June 1970, it became a priority to finally establish an official date that had some legitimate foundation in time for the big birthday.

Smith cleverly decided that the premiere of Steamboat Willie at the Colony Theater in New York on November 18, 1928 was truly the first time that Mickey Mouse made his debut.

Of course, both Plane Crazy and Gallopin’ Gaucho had had extremely limited one day theatrical appearances in single, local Los Angeles theaters to judge the audience’s reaction and to try to find a distributor for the series but it was Steamboat Willie that made a huge hit nationwide, had an extended run and garnered tons of publicity.

So Mickey first celebrated his official birthday on November 18th, 1978 thanks to Dave Smith and has continued to do so for the last forty years. Of course, it is also Minnie’s birthday but it is rude to acknowledge a lady’s age.

Most articles refer to the cartoon as a parody of comedian Buster Keaton’s last independent silent comedy, Steamboat Bill Jr., which had been released in May 1928.

Both films do feature a steamboat, and Keaton’s character is named Willie, but the Disney cartoon makes no direct references to Keaton’s film, unlike Gallopin’ Gaucho, which parodies the action and style of the Douglas Fairbanks’ silent film, The Gaucho (1927).

While Walt may have hoped that audiences would associate his cartoon with the popular Keaton film, no direct parody was intended. It was just Walt’s way of drawing attention to the cartoon.

Steamboat Willie, the first Mickey Mouse cartoon, is perhaps the most important and well known of the early animated cartoons. It transformed a fading cinematic novelty into an art form and became the foundation of the Disney Company.

According to Roy O. Disney’s personal handwritten ledger books, the film cost $4,986.69, which included not only the production costs but the prints for movie theaters.

Steamboat Willie debuted on a Sunday afternoon, November 18, 1928, at Manhattan’s Colony Theatre on 53rd Street and Broadway in New York.

The theater was later renamed the Broadway theater and for Mickey’s 50th birthday in 1978 a plaque was installed at the theater designating it the official birthplace of Mickey Mouse. A costumed Mickey and Disney Legend Ward Kimball were in attendance for the ceremony. That same theater premiered Fantasia in 1940.

The original story script for Steamboat Willie written by Walt with two fingers on a manual typewriter and illustrated by Ub Iwerks was found in Walt’s desk by Disney Archivist Dave Smith when he was hired in 1970 and one of his first jobs was cataloging Walt’s office. Dave told historian Jim Korkis, “The fact that he [Walt] saved the Steamboat Willie script proved to me that he did at least treasure this special moment in history, which had started him on the road to success.”

In 1988, to celebrate the 60th birthday of its most famous cartoon character, the Disney Company donated to the Smithsonian National Museum of American History six original drawings from Steamboat Willie selected personally by Walt’s nephew Roy E. Disney.

Steamboat Willie was inducted into the National Film Registry in 1998 as a “culturally, historically, or aesthetically significant film” deserving of preservation at the Library of Congress.

In the opening of Steamboat Willie, Mickey is whistling the chorus of a popular parlor song of the time called “Steamboat Bill,” written by the Leighton Brothers (who also composed “Frankie and Johnny”) and Ren Shields (who wrote “In the Good Ol’ Summertime”) in 1911. The song helped inspire the title of the cartoon.

(The song recounts the story of Steamboat Bill, commander of the steamboat Whippoorwill, who was attempting to break the record of the Robert E. Lee, which in 1870 had set a record time covering the stretch of the Mississippi between New Orleans and St. Louis.)

Captain Pete had previously been a villain in both the Oswald cartoons and the Alice Comedies. He is the longest continually appearing Disney animated character.

He is a cat because that would be a natural adversary of a mouse. Pete is the captain of the steamboat and is so identified that way in Walt’s script as “cat Captain”. Mickey is the pilot who helps navigate and is the only crew member on board. 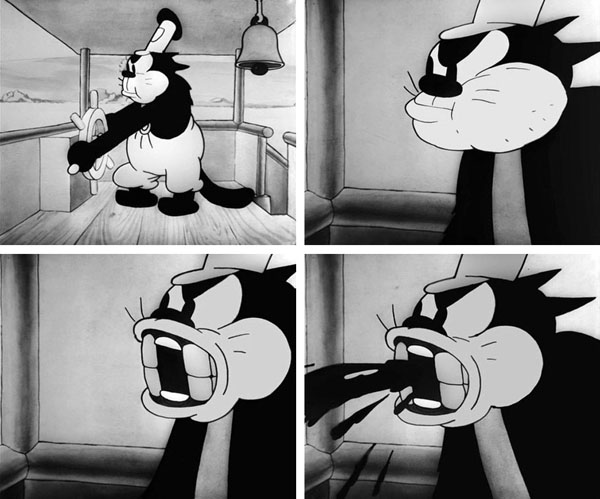 Walt Disney not only did the squawks for Mickey Mouse in this cartoon but provided the voice for the smart aleck parrot. Walt must have liked this particular parrot because he later appeared in three other black-and-white Mickey Mouse cartoons.

Disney Legend Ub Iwerks animated virtually the entire film himself in what was known as “straight ahead” animation, a technique in which he did the first drawing, then the second drawing, then the third, and so on. He had help on two very short scenes by Les Clark and Wilfred Jackson of Minnie running on the riverbank and Mickey feeding the cow some hay. It was documented that Iwerks could produce over 600 drawings a day that were usable or roughly one drawing a minute during a ten hour day.

Weekly Film Review proclaimed after that first screening that Steamboat Willie “kept the audience laughing and chuckling from the moment the lead titles came on the screen, and it left them applauding.”

Exhibitor’s Herald stated, “It is impossible to describe this riot of mirth, but it knocked me out of my seat.”

Disney Legend Wilfred Jackson later recalled: “Walt didn’t know if people would believe that the character on the screen was making the noise. Nobody had ever seen a drawing make noise, and there was no way to be sure that the people would believe it. It might just look like some kind of a fake thing, and Walt wanted it to seem real, as if the noise was coming right from what the character was doing.”