The Tezuka Pro TV Specials #6: “Baghi: The Monster of Mighty Nature”
Winky Dink, Howdy Doody, and You!
WHAT ABOUT THAD? July 7, 2014 posted by Thad Komorowski

Welcome to 1935… As Popeye points out in January 2’s panel, the public is still laffin’ at the 1934 pictures, and the hilarity would build even further.

Interestingly, even though the Fleischer lineup had expanded to include the Color Classics by this point, they almost never promoted the series, or the Screen Songs, in the Paramount Sales News panels. For years, it was only Popeye and Betty.

One thing I’ve noticed looking at these chronologically is that Hal Seeger’s handling of Popeye is getting stronger, evoking the strongest animation of Popeye in the January 16 and February 27 panels. Navel fetishists note February 22’s panel highlights Betty as the “cutest thing in shorts,” even though the Fleischer artists were covering her with more and more clothes! 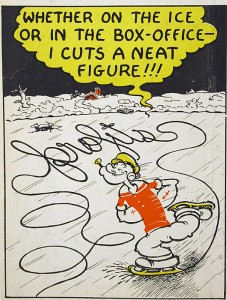 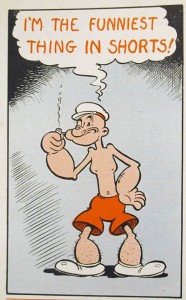 Below: A sample of what the Paramount salesmen were selling to the theaters at the time these promotional pieces above appeared in print.