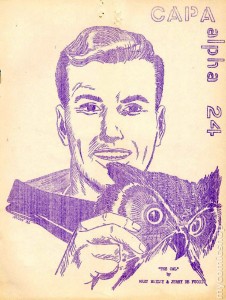 The Secret Origin of Animation Anecdotes. I am a huge comic book fan (even writing foreign Tiny Toons comic books at one point) so in November 1971 I joined Capa-Alpha, the first comic book apa. It was started by legendary comic expert Jerry Bails who also created the magazine Alter Ego. An apa is an amateur press alliance where each member produces copies of his individual zine for each member on the roster.

The name of my zine was “harlequin” (all lower case) because those were the days when people tried to come up with distinctive names for their contribution like “Portrzebie”, “Ibid”, ”Fickle Finger of Fate”, “Wonderment”, just like in later years people would come up with distinctive and later regrettable names for their e-mail addresses. Another member of Capa Alpha was Michael Barrier who began a zine called “Funnyworld” that evolved into a magazine.

As an aspiring actor, I had recently appeared in a school production of a completely unauthorized one act based on Harlan Ellison’s “Repent Harlequin Cried the Tick Tock Man” and liked the name and character. In addition, the name related directly to my interest in theater and the Italian comedia del’arte character. I still produce a monthly contribution to the apa (meaning over forty years of non-stop monthly contributions). 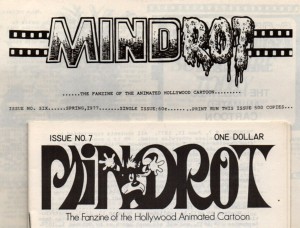 I was also a huge fan of Disney and animation and often in my apazine, besides talking about comic books and showcasing some of my own amateurish artwork, I occasionally included little bits of quotes, news and stories about animation that I found in four different Los Angeles newspapers and various magazines.

In Film Collector’s World, a monthly newspaper I subscribed to, Mark Mayerson had a column on animation and mentioned a new fanzine called Mindrot published by Dave Mruz. I wrote to Dave and offered to supply him with some of the stuff that had been appearing in my apazine. Since it came from my harlequin apazine, the column was called “harlequin” as well because I figured Mindrot probably wouldn’t last and I probably would run out of material soon anyway.

So the first harlequin column appeared in Mindrot #6 (Spring 1977) and the name caused confusion for quite a few years about its relation to animation. Jim Engel eventually did a wonderful caricature for my column heading.

Mindrot, lated renamed Animania, lasted for another six years until issue #27 (December 1983). I did similar columns of anecdotes and news for magazines like Animato!, The ASIFA (Hollywood) Newsletter, The Comics Reader and others. I experimented with other names for the column including “Suspended Animation” and “Cel Break”.

When Terry Thoren started Animation Magazine (August 1987), I was asked to write a similar continuing column starting with the first issue. My friend and writing/business partner at the time was John Cawley who pointed out that the name “harlequin” was always confusing. He suggested the name “Animation Anecdotes” because that was really what all those oddball things were. I continued to write that column for over a decade until new editorial leadership decided to shift the magazine in a different direction and just stopped printing columns I was submitting so I took the hint.

Jerry Beck has been a long time friend and inspiration through all of those decades and when he decided to re-boot Cartoon Research in 2013 as a group blog, I volunteered to help him out by doing a weekly column so he could catch his breath until the site got rolling. I figured I would run out of material before the end of the year even using some older material that was still valid but at least by then Jerry would have things under control.

My first Animation Anecdotes column appeared here on March 15th, 2013 – which means in a short while I will have been writing this column every week for four years (not including the extra columns I have also done).

Everyone always asked if I would compile the columns that appeared in a variety of different locations into a book, so in September 2014 through Theme Park Press, I released the book Animation Anecdotes that featured some of the best classic examples from over thirty-five years of columns plus some brand new entries.

The book has proven to be the worst-selling book I have ever written. The people who buy the book like it but very few people buy it in the first place. I have more than enough material for a sequel or two but that’s not going to happen. The general public no longer seems as interested in classic American animation as it once was so I am grateful that Cartoon Research provides a home for this column for those people who are still intrigued.

The purpose of the column is to entertain and educate. I hope every now and then a reader goes “Wow! I NEVER knew that!” In addition, I have been told that it is a great resource site for people writing about animation which is why I have made more of an effort to include the sources for the material when possible.

A Lost Filmation Production. I was actually in a Filmation production and got paid scale. In February 1982 at Filmation’s Reseda studio I was a contestant in a half hour pilot called The Origins Game with host Bob Eubanks. The premise was that contestants battled to identify the origins of words, sayings, superstititons and more. It was coproduced by Filmation and SFM Media Corp.

What made the game show unique is that there was six minutes of animation during each half hour illustrating several possible clues. The series was conceived by Filmation’s Norm Prescott. 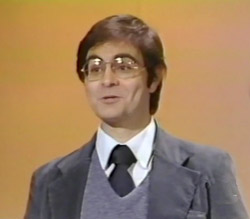 I was invited to participate because of my appearances on other game shows including The Gong Show, The Dating Game, and Camouflague (where I won a red Cadillac) because they liked my personality and directability. I was a member of the actor’s union A.F.T.R.A. so I got paid scale (actor’s minimum payment).

To break the suspense, I won $10,000 because I knew the origin of the phrase “ham actor” (melodrama actors used grease paint makeup and removed it with bacon rind and then went into bars smelling like a pig so exaggerated acting was done by ham actors). However, I NEVER received the money because it was just a pilot and it never sold. If it had sold, I would have gotten the money and my life would have been different. Later, I appeared with my family on Family Feud before moving to Florida. I have VHS copies of the game shows I’m on, which I taped off the air when broadcast. The Origins Game never aired. Here is my segment (below) – the only proof that my Filmation experience actually happened!