Popeye the Sailor cartoons were a television staple during the 1960’s. Both the theatrical films and the King Features made for television cartoons were airing in hundreds of markets. Children just couldn’t get enough of seeing their favorite spinach eating strongman on television – and, as I discovered, many also had the opportunity to watch him while in the classroom, at churches and in other public service venues.

The cartoons themselves were produced by several studios, farmed out around the world – New York, Hollywood, Prague, London, etc. – to Oscar winning directors like Gene Deitch and Jack Kinney. The animation in these cartoons is as far away from Disney productions as you can imagine. But were there any connections one could draw between the mighty Disney and these made-for-TV Popeye shorts.

In the course of my never-ending Popeye research I found one such curious connection: a TV cartoon re-fitted to do double duty – to entertain and to also educate.

In the November 22nd, 1961 edition of Broadcasting Magazine an article was published called, “I’m Popeye the Pubservice Man” (obliviously a play on “public service”).

The piece stated King Features Syndicate is aiming a number of their Popeye television subjects at various public services.

The magazine reported, “for instance, a new Popeye telefilm, titled Uncivil War has Olive Oyl, Wimpy and Brutus demonstrating just about every unsafe driving technique in the books, with dire consequences.”

Uncivil War (1960) was directed by Jack Kinney who was no doubt inspired by his similarly themed Goofy cartoon, Motor Mania (Disney, 1950). For a little more about that short – and other Goofy highway safety cartoons – click here.

The Goofy short was originally shown in theaters – where its safe driving message could reach adults, as well as entertain children. What’s odd is, the King Features Popeye cartoons were strictly aimed at kids.

I guess it didn’t matter. For the most part Kinney’s Popeyes were hit or miss. However, this particular entry was a bit better (in my humble opinion) in both animation quality and story. Here’s the ‘public service’ version of the cartoon:

The cartoon’s conclusion is a story in itself. Originally, when Swee’pea speeds off on his bike, a Kinney animated Popeye looks at the audience and says, “well ya can’t learns them too young, arf, arf, arf, arf, arf, arf!” This version remained in syndication for years. But it was decided, when screened for public service outlets, the ending would be replaced by Popeye singing a safety song utilizing animation by Paramount Cartoon Studios (who produced several Popeye the Sailor episodes for King Features Syndicate); “Know when ya starts driving, cause safety keeps thriving, says Popeye the Sailor Man, toot! toot!”.

Unfortunately the standard TV version of Uncivil War does away with the song, and dubs Popeye’s voice – “well ya can’t learns them too young, arf, arf, arf, arf, arf, arf” – over the safety song animation. Very bizarre looking to say the least. Take a look:

There are actually three different versions of this cartoon – when this film was dubbed into Italian the cartoon simply ends with Swee’pea zooming off.

A truly unique Popeye television cartoon to say the least!

Thanks to Donald Pitchford (Lum & Abner Cartoonist) and Devon Baxter for their contributions to this article.

Fred M. Grandinetti is the author of five Popeye related books and a number of articles on the one-eyed sailor. Other topics by Grandinetti published in newspapers, magazines and the web include The original Batwoman (Kathy Kane), I Dream of Jeannie, Tara King (from The Avengers), The Mighty Hercules, the Batman television series and Bozo the Clown. Fred, along with Cuyle Carvin and David Hudon, produced the anti-bullying graphic novel, Different Worlds, Best of Friends. Fred is also the host of the award-winning cable access series, Drawing With Fred. 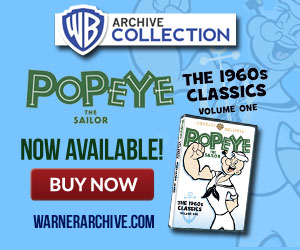