In His Own Words: Walt Disney on Animation

Over the decades, I have collected quotes by Walt Disney from magazines, newspapers, interviews and more. Here are a few that relate to animation that readers may not have seen or may not remember:

“In Kansas City, when I became seriously interested in cartooning, I gained my first information on animation from a book written by E.C. Lutz which I procured from the Kansas City Public Library.” – Letter from Walt Disney to Miss Irene Gentry of the Kansas City Library in Missouri August 17, 1937

“I’ve often been told how lucky I am not to have any stars to go temperamental on me. It’s true I never have any trouble with Mickey, the three pigs or any of my characters. But don’t ever think animators can’t be temperamental. Say, they can be just as bad as any star you ever saw.

“Occasionally one will have an off day on which he can’t draw anything worth while. Then he has to be pampered and pulled out of his slump with all the diplomacy that would be used on coaxing a (movie) star.” – Odgen Standard Examiner newspaper May 12 1935

“I never show a bad cartoon from another studio. That tends to make everybody here get fat and lazy and smug. But when they see a good one somebody else has made they charge out and work twice as hard.” – “Walt Disney Spurning $8 Million in TV Offers” for the United Press International with reporter Virginia MacPherson December 18, 1952

“No matter how good a picture we turn out, I can always see ways to improve it, when it’s too late. So I try to put the idea to work in the next picture. I’m just as amazed at the success of our cartoons as anyone else. Sometimes I pinch myself to make sure I’m not dreaming.” – “What Has Disney Got that We Haven’t?” by Frank Taylor The Commentator magazine October 1938

“We kept fooling around with the Silly Symphonies until we came up with ‘The Three Little Pigs’ (1933). I could not possibly see how we could top pigs with pigs. But we tried, and I doubt whether one member of this audience can name the other cartoons in which the pigs appeared.” – Walt Disney’s speech accepting the Showman of the World Award from the National Association of Theatre Owners October 1, 1966

“Because the animated cartoon comes to life of the screen, it belongs in the field of the motion picture. But because it is drawn and painted, it is also one of the graphic arts like painting. As a matter of fact, it is often referred to as the last of the graphic arts.” – Walt’s introduction to the television episode “Tricks of Our Trade” (2/13/57)

“We try to get something in the cartoon besides just nonsense. We have to be careful not to get the sketches too silly.” – “How Silly Symphonies and Mickey Mouse Hit the Up Grade” by Florabel Muir in the New York Sunday News December 1, 1929

“We had decided there was only one way we could successfully do Snow White (1937) and that was to go for broke — shoot the works. There would be no compromise on money, talent or time. We did not know whether the public would go for a cartoon feature; but we were damned sure that audiences would not buy a bad cartoon feature.” – Walt Disney’s speech accepting the Showman of the World Award from the National Association of Theatre Owners October 1, 1966

“For years we got by on ‘shorts’—borrow some money and make a ‘Mickey’ or a ‘Duck’ and then pay off enough to borrow some more. Animated cartoons are more expensive to make than live-action films. Where they pay off is on revivals. Every seven years they come back for a new audience. And they don’t date like live action does.” – “Citizen Disney” by Arthur Miller for Los Angeles Magazine November 1964.

“It was always my inclination to think in pictures rather than words. I was already dreaming of becoming an artist. I spent many study hours in elementary school drawing flip-over figures on textbook margins – like the McGuffey readers – to entertain classmates.” – The California Teacher Association Journal December 1955

“The trick of creating a cartoon character with a real personality requires something more than proper movement. In order to really come to life, the character’s actions must appear to come from his own thoughts and feelings. In other words, a cartoon character must seem to have a cartoon brain. For only thinking characters can become a personality.” – Walt’s introduction to the television episode “Tricks of Our Trade” (2/13/57)

“Our most important aim is to develop definite personalities in our cartoon characters. We don’t want them to be just shadows, for merely as moving figures they would provoke no emotional response from the public. Nor do we want them to parallel or assume the aspects of human beings or human actions. We invest them with life by endowing them with human weaknesses which we exaggerate in a humorous way. Rather than a caricature of individuals, our work is a caricature of life.” – “Disney’s ‘Philosophy’” by Douglas Churchill New York Times Magazine March 6, 1938

“When a story must be told in seven minutes on the screen, it is a great advantage to start with a situation familiar and self-explanatory and from this meeting ground of common experience or knowledge lead the audience’s imagination subtly and gradually from the familiar to the amazing and impossible.” – “Exposing Mickey Mouse” by Walt Disney in Screen Book magazine January 1934

“I told (my animators): ‘Put a kitten on the kitchen floor with a ball of yarn; pour a little molasses here and there and then watch it. A kitten will think up more cute tricks in five minutes than a gag man could in a lifetime’.” – “McEvoy in Disneyland” by J. P. McEvoy in Reader’s Digest February 1955

“Look at Donald Duck. He’s got a big mouth, a big belligerent eye, a twistable neck and a substantial backside that’s highly flexible. The Duck comes near being the animator’s ideal subject. He’s got plasticity plus. – “The Amazing Story of Walt Disney” by Jack Alexander from Saturday Evening Post magazine November 7, 1953 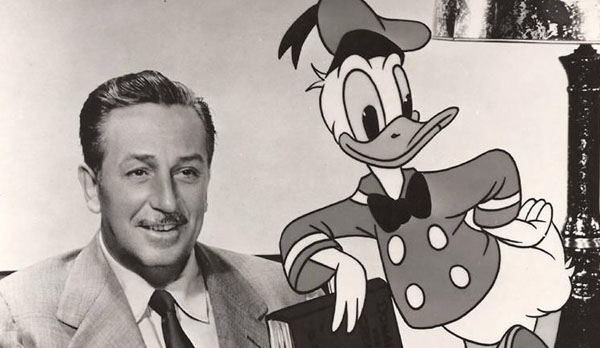