On this day in 1951, one of Disney’s most offbeat and unfathomable animated features premiered–but it took seven more years for the story LP to appear on Disneyland Records.

Instrumental: “March of the Cards” by Sammy Fain.

Many believe the Walt Disney version of Alice in Wonderland to be the one of the few feature films to come close to capturing Lewis Carroll’s dreamlike, non-linear books and gain greater appreciation with each generation. 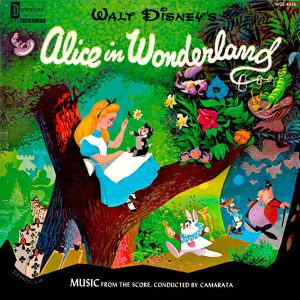 The 2010 Tim Burton version was the first Alice adaptation to be a box office hit out of the gate, but a story thread was needed in order for Alice’s adventure to “made sense” and “send a message.” The very things that make Carroll’s books so eternally compelling is that they defy all sense and that the audience is given the option of interpreting them—or not—”and when you come to the end, stop… see.”

Walt Disney and his artists could never really tame this beast of a fantasy. The finished film was not among Walt’s favorites—although the Wonderland concept was of constant fascination throughout his career, from the Alice in Cartoonland series and his first TV special, One Hour in Wonderland (promoting the 1951 Alice), to the popular Alice in Wonderland ride and Mad Tea Party teacups park attractions.

Ultimately, the film is one of a select few classics that only gains momentum as the world catches up with it. Ward Kimball (who contributed the acerbic Cheshire Cat and unhinged Mad Tea Party sequences) called the movie a “loud-mouthed vaudeville show.” Maybe it was to a degree. So are Looney Tunes cartoons, Marx Brothers comedies and Monty Python sketches. It took on a life of its own, a Young Frankenstein monster of animated design, music and madness. that even its creator could not contain. Surely no one in 1951 expected this sort of thing from Disney—much less a confident, outspoken female character like Alice, who did not suffer fools and stood up to authority. Don’t let’s be silly!

[As of last Friday on Cartoon Research, our wondrous friend Jim Korkis has by coincidence started a multi-part series on Disney’s Alice, and its journey to the screen. I not only urge you to enjoy it but also the comments which share the same acknowledgment of the 1951 film as a definitive masterwork.]

As we covered in previous Animation Spins, particularly this one about The Greatest Record Album Ever Made, there was no soundtrack album for Alice in Wonderland until the CD in 1997. Briefly, Decca had purchased the rights but dropped the option. The newly-minted Disneyland Record company decided to record a studio version with their musical director (and Disney Legend), Tutti Camarata, and multi-talented Mickey Mouse Club Mouseketeer Darlene Gillespie.

Walt Disney’s Alice in Wonderland, Music from the Score Conducted by Camarata (which can be downloaded at Amazon, iTunes, Spotify or on vinyl picture dischttps://www.disneymusicemporium.com/product/XVLP32/alice-in-wonderland-picture-vinyl). It was recorded in 1957 at Hollywood’s famed Capitol Records building with an immense orchestra and chorus (Norman Luboff may have been involved with assembling the singers, the female voice in “’Twas Brillig” could be his wife Betty; Thurl Ravenscroft can also be heard clearly in the ensemble).

Darlene was narrated the story on one of the earliest albums in the original “Storyteller” LP record and book series. Her narration bridges each of the songs, while some of the music bridges and instrumentals also play while she speaks. Released in 1958, the album had a glossy book inside the gatefold cover with short text, line art and color images from the film.

When the ABC-TV network canceled the Mickey Mouse Club, Disneyland Records re-recorded and repackaged most of the Storyteller albums to replace the Mouseketeer narrations by Darlene Gillespie from Alice, Annette Funicello from Snow White and the Seven Dwarfs (see this Spin) and Jimmie Dodd from Peter Pan and Bambi (see this Spin).

Each new gatefold cover did not mention a narrator at all, but did include an intriguing “Magic Mirror.” This was a die-cut oval revealing a portion of the front page—a clever selling tactic because one could not see the whole illustration without buying the record! Surrounding the Magic Mirror was a photograph of a fabric pattern selected by the art director to complement the illustration and the theme of the story. Alice was given a simple plaid checked cloth fabric, as opposed to an elegant satin for Cinderella, or a forest green fabric for Peter Pan, etc).

Disney Legend Ginny Tyler performed all the scripts as they were originally written with only a few revisions. She is not credited on these albums, but introduces herself as the “Disneyland Storyteller.” She begins the Alice LP with a transitional device: “I’ll be Alice… Alice in Wonderland!” and continues in character as a little girl. She does the same on the Cinderella Magic Mirror Storyteller, upon which her narration replaces Cliff Edwards as Jiminy Cricket (see this Spin).

Darlene portrayed Alice basically as herself, a personality in the role she created as the singer on the album and a performer on the Mickey Mouse Club. Her performance is not slick or polished but is natural, unpretentious and even quite amusing.

A master of voice acting, Ginny Tyler plays every role as a separate entity, not just as a ‘different’ voice. Everything about her performance is top drawer—the pacing, breath control, diction—and most important and difficult, the choice of how to emphasize the words. One can vary the tone just for the sake of not sounding repetitious and it becomes a sing-song. There does not seem to be a Ginny Tyler narration in existence that is not on the button.

However, there’s no getting away from the fact that this was not Ginny’s script—and not her songs, because Darlene was still singing. It is a challenge that she rises to admirably. It works, because lots of Storytellers were narrated by actors who were not necessarily in the soundtrack portions of the records, but for those who know the Darlene version, the original works better—which is ironic because Darlene isn’t the original Alice, either, but her identity on the Camarata album was attached to her narration. One thing must have been fir sure—the narration was specifically designed to flow in and around the songs and instrumentals from Camarata’s album. 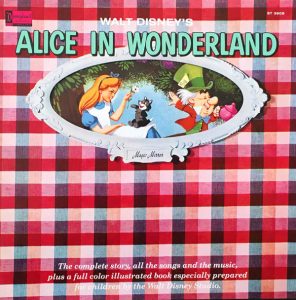 When the Magic Mirror series was being produced, Disneyland Records was struggling with cost-cutting measures to stay in existence. For this reason, some steps were skipped when making the re-recorded Storyteller albums. Back in 1958, Alice in Wonderland Storyteller was produced by recording Darlene’s narration and sometimes timing it when it needed to be inserted within the bridge of a song. Then it was fitted over the various instrumental sections, inside the song bridges and between the songs.

After Ginny Tyler recorded her 1962 replacement narration, it would have taken time and money to go back to the music tracks, time some of it, place her narration over the sections again, making sure they match, etc. Instead, her narration was recorded “wild,” with no need to time (note that her version is a few minutes longer, allowing her the freedom to slow down and play with the voices). When Darlene’s narration was present on the tape over some music, or heard on a portion of a song, it was either cut or faded. This saved hours of studio time, resulting in much-needed cost savings in 1962–when the record company faced closure unless it kept making more and costing less. Annette’s pop records had kept the label afloat since 1959 and that lead to what was still a few years away—the recording success of Mary Poppins, which solidified the Disney Music Group to this day.

Throughout the sixties and seventies, it was very possible to buy a Magic Mirror or an even later edition of a Storyteller album and still find a Mouseketeer narration inside. The supply of early LP versions must have been plentiful. Perhaps the old covers were discarded when a new cover was printed and the remaining early records were placed into new covers. Disneyland Records must have known this because none of the subsequent covers was very specific about the narrators unless they never changed (like Cliff Edwards as Jiminy Cricket, who was NOT replaced on Pinocchio, as explored in this Spin).

To millions of listeners, the Magic Mirrors were narrated by whoever was on the record inside regardless of the date on the cover. Even in 1969, when the cover sported the super groovy artwork that was used five years later when the film was reissued for its second time in 23 years (and the film stills were replaced by painted illustrations), it was conceivable that the 1958 version could be inside.

[Anecdotally, I received my first copy of the 1962 Alice Magic Mirror album in 1966. The 1958 Darlene Gillespie record was inside and it was over ten years before I even realized that Ginny Tyler recorded her own version. In the late seventies, my brand-new copy of the 1969 Snow White Storyteller with the purple cover had the 1957 Annette-narrated LP was inside.]

Darlene was sixteen (going on seventeen), and about five years older than the movie voice of Alice, Disney Legend Kathryn Beaumont. Either the Storyteller script was written to fit her TV persona as an American TV teen of the 1950s, or she just made the lines work in her own style. It’s always fascinating to compare two different interpretations.

This is the 1962 Magic Mirror version narrated by Ginny Tyler: 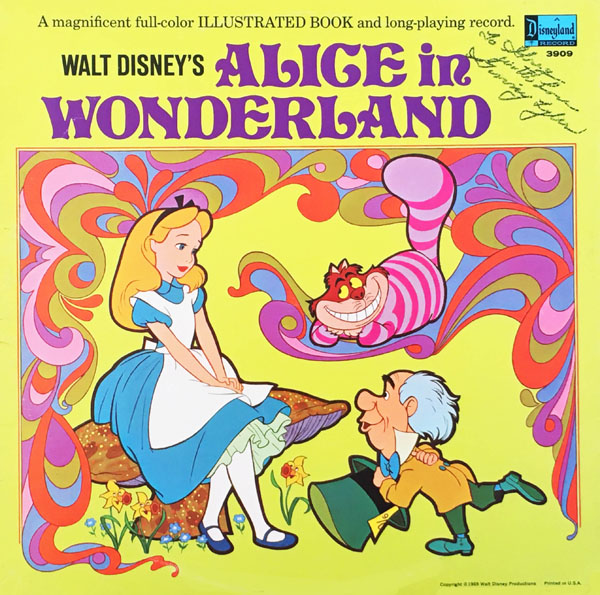 This text was also recorded by Lucille Bliss [https://www.youtube.com/watch?v=XzhRTOCbCsM] for Disney’s Peter Cottontail album, which was in this Spin.

Instrumentals: “Alice in Wonderland,” “In a World of My Own,” “I’m Late,” “The Caucus Race,” “The Walrus and the Carpenter,” by Sammy Fain, Bob Hilliard; “March of the Cards” by Sammy Fain.

One of the finest of Jymn Magon’s late-seventies “new wave” of Disneyland read-alongs that added a cast, music and sound effects. The text was similar with alterations to fit the dialogue and to work the songs into the narrative rather than putting them at the end.

The Camarata album provided a rich library of cues for the background. Listening carefully, it is possible to hear the vocals in some of the background music. The songs had the vocals mixed down to be barely audible so they could be used as underscore.

Alice in Wonderland was revamped as a read-along once more in 1999 (#60437-2) by Randy Thornton and Ted Kryczko in 1999. For the first time, Oliver Wallace’s background music from the 1951 film soundtrack was heard in the background. Roy Dotrice narrated. Originally released exclusively on cassette, it is now out of print but would most likely be the current version if reissued in the future by Disney Publishing, which now releases CD read-along packages.

Salvador “Tutti” Camarata must have loved this gorgeous vocal arrangement in his native family language version over his original orchestral track.