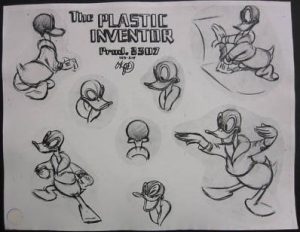 From the time of his first starring role in 1937 through the end of Walt Disney’s life in 1966, Donald Duck starred in more than 120 theatrical shorts—and that’s not counting the dozens of other shorts in which he played supporting roles; nor the special, educational and public-service shorts, or the five feature-length films, or the numerous television programs in which he also appeared. With such a voluminous output, it’s hardly surprising that some of his films are better remembered than others. Apart from the textbook classics, there are scores of Donald Duck short cartoons that are scarcely remembered today, but are worthy of a closer look.

Released in the autumn of 1944, The Plastics Inventor is an unassuming entry in the Duck series. In fact, however, it’s not only an entertaining and well-made cartoon, it also has several unusual points of historical interest. To begin with, production of this film was linked to one of the educational spreads Disney was concurrently producing for LOOK magazine (recently discussed in this space). An illustrated lecture on “Plastics,” featuring Donald, appeared in the magazine’s pages in June 1944, and a scant three months later The Plastics Inventor appeared on theater screens, playing the whole idea of “baking” plastic objects for laughs. Synergy aside, the making of this film may well have preceded the idea of the magazine feature. (Story work on The Plastics Inventor started as early as February 1942, when Carl Barks was still at the Disney studio and an integral part of the Donald Duck story crew.) 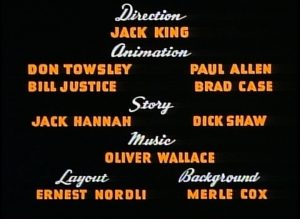 Also of interest, The Plastics Inventor features production credits on screen. This was a significant development. The earliest Disney sound cartoons had offered screen credits, and in fact the first Silly Symphonies had explicitly credited both animator Ub Iwerks and musician Carl Stalling. But when Iwerks and Stalling both quit the Disney studio on the same day in January 1930, lured away by Pat Powers, company policy was changed and screen credits abruptly disappeared from the studio’s films. Subsequent cartoons were “A Walt Disney Production,” period. Snow White and the Seven Dwarfs, and succeeding feature-length pictures, did include extensive screen credits — so extensive that critics commented on the surfeit of names on the screen. But animators and other artists on Disney shorts remained unsung well into the 1940s. Now, in 1944, screen credits were quietly reinstated. The Plastics Inventor became Donald’s first adventure to identify some of the artists onscreen.

And, in fact, the animation credits in this film offer an intriguing mystery of their own. The format seen here would become the standard protocol for animation credits in Disney shorts: four names — three character animators and one effects animator. This time, however, there’s a strange anomaly. The effects animator credited here is Brad Case — and in the film’s final draft, reflected in the credit list below, there’s no mention of Brad Case! Instead, effects work is assigned to two other well-known members of the department: Ed Aardal and the legendary Josh Meador. The draft is dated March 1944, and it’s entirely possible that some shakeup during production, after that date, led to the recasting of the effects scenes. If such a shakeup did occur, the film’s exposure sheets would likely shed some light on it. However, at this writing I have not been able to review the Plastics Inventor exposure sheets. If and when I discover the solution to this mystery, I’ll post my report here! 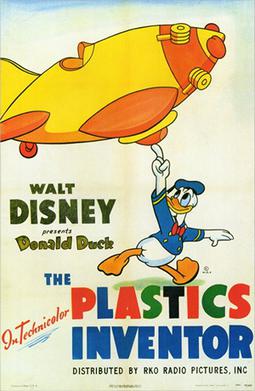 A third point of historical interest came to light after the film was released—eight months afterward. Charles A. Breskin apparently discovered The Plastics Inventor by accident in May 1945 when he saw it at the movies. Breskin was the editor and publisher of Modern Plastics magazine, an industry organ, and the Donald Duck cartoon moved him to indignation. His editorial in the magazine protested: “Although we realize this cartoon is intended to be humorous, the result unfortunately is to belittle plastics.… I think this picture will do incalculable harm to our industry. Even if it is a comic exaggeration, the film leaves the uninformed movie-goer with the impression that (1) plastics are easily made from junk and (2) that they melt in water. It is this kind of muddled thinking about plastics that the industry is trying to correct.” Breskin urged his readers to write letters and telegrams directly to Walt, denouncing the cartoon and demanding that he withdraw it from circulation!

Breskin did succeed in arousing the collective wrath of the plastics industry; a host of correspondents from across the nation wrote to Walt to protest The Plastics Inventor. Needless to say, their campaign was unsuccessful; the studio did not withdraw the cartoon from release. And, happily, some members of the industry did maintain their senses of humor. One correspondent, editor of a rival plastics magazine, wrote to Walt: “All of us who laughed with your jolly aviator want to join in thanking you for giving plastics a break. We don’t mind a bit that Donald Duck’s materials were junk and turned into a plane and a melting parachute, because we know that plastics are not so shaky that a little ribbing will do them any harm. Thanks from all of us for a nice boost.” 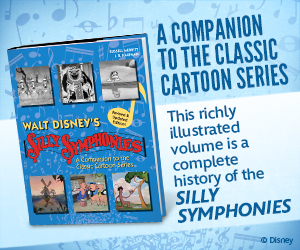