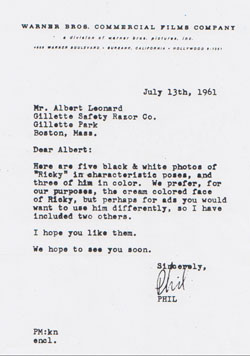 Warner Commercials. In the Fifties, the Disney Studio earned money doing a variety of television commercials and even creating new characters. Warner Brothers also had a commercial unit that Jack Warner hated because it came with agents from the various companies telling everyone what to do. “Whenever animated commercials came into the studio, they were assigned to whoever thought they had the time to do them or who they felt they could trust to do them well,” recalled animation legend Friz Freleng. “I did Charlie Tuna, Kaiser foil, Skippy peanut butter and (Sharpie the parrot) for Gillette. I did a couple they were very happy with.”

According to the Gillette history website, Sharpie was not the only animated commercial spokesman created for Gillette by Warner Bros. Cartoons. “In 1960, the Company contracted with Warner Brothers Commercial to create a ‘clock’ to tell folks to wake up and use Gillette’s new deodorant – Right Guard. The first aerosol – therefore the first deodorant for men that was not yucky. His name was Ricky-Tick. He was not used for long, but he was created by Chuck Jones.”

Click the letter (from Phil Monroe to Gillette) to enlarge; and click thumbnails below to view these rare images of Ricky-Tick: 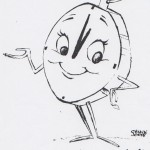 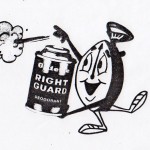 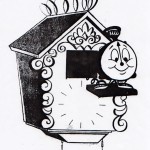 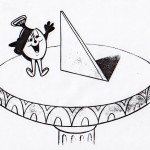 Booping Along. CBS Theatrical Films in 1982 reportedly spent $200,000 for the rights to the Betty Boop cartoon character so that it could be transformed into a Broadway musical like “Annie”. At one point, it was rumored that actress Bernadette Peters would play the part. Peters appeared as Betty Boop on Saturday Night Live (November 14, 1981). The first live action Betty was probably Bonnie Poe who appeared as the character in “Hollywood on Parade No. A-8” (1933) menaced by Bela Lugosi as Dracula. Both MTV and HBO turned down a pitch for a Betty Boop series called “Betty Boop’s Misguided Tours” with Betty as a tour guide in 1998.

Animation on Stage. The Broadway production of “The Apple Tree” in 1966 featured a short animated film sequence by Richard Williams. Williams was contacted to provide the animation for the Lauren Bacall musical “Woman of the Year” (March 1981) but Williams recommended instead a New York based animator, the amazing Michael Sporn. Sporn working with a single assistant, animation historian John Canemaker, had less than two weeks to complete the more than 8,000 required drawings of a cat character called “Katz” (and the female counterparty, Tessy).

In the musical, Sam Craig (Harry Guardino) is interested in Bacall’s character who on television was uncomplimentary about comic strips. Craig is also a cartoonist and at various points in the play, he is confronted by his animated creation who helps Craig come to grips with his feelings for Bacall’s character. When the play premiered in Boston, the use of the animated sequences with the live actors received such a strong favorable reaction that four additional minutes of animation were added to the show. The show was nominated for six Tony awards and won four.

The Never Made Disney Animated Feature About Indian Culture. From an Associated Press newspaper account dated September 12, 1948 about Walt Disney starting work on a serious animated feature based on Hiawatha, hero of the famous poem by poet Henry Wadsworth Longfellow. Press articles about the forthcoming feature appeared as late as 1951:

“Dick Kelsey, one of Disney chief staff artists will spend six weeks (starting Sept 25) touring the Great Lakes Region sketching and documenting the settings of Longfellow s famous narrative poem. His Itinerary includes Chicago, Minneapolis-St. Paul, the shores of Lake Superior and Michigan, Ann Arbor, Lansing and Detroit across Lake Erie to Buffalo then through Rochester the Finger Lakes district the Mohawk Valley down the Hudson to New York and on to Washington for museum data. Color camera records will supplement his sketches.

“The finished cartoon likewise will be in color. Kelsey’s will be no easy task in this modern era since he insists he will try to recapture both the spirit and the look of Hiawatha’s land. Every remaining forest, prairie, lake and river associated with the Indian legend will be visited by boat, automobile, train, horse or on foot, he declared. He has arranged to study museum material in Chicago, St Paul, Minneapolis, and Rochester the American Museum of Natural History and the Heye Foundation in New York and the Smithsonian Institute and the Bureau of Indian Affairs in Washington. At Naples, NY he will confer with Dr. Arthur C. Parker, director emeritus of the Rochester Museum, an authority on American Indian life and lore.”

Full Circle. In 1989, Filmation was sold to the French cosmetics company, L’Oreal, after undergoing several drastic staff cutbacks. In fact, the studio was closed before L’Oreal took possession so they ended up with only the film library. Producer Lou Scheimer stated at the time, “What’s happened to us is a microcosm of what’s happened to industry in America. In the short term, it may be very difficult to produce animation entirely in this country. I see one hopeful sign. You can’t afford to do it in Japan these days, either. The Japanese are subcontracting work to the Koreans who are subcontracting it to Taiwan, the Philippines, mainland China and Malaysia. I’m eagerly awaiting the day a Japanese animation studio comes to ask us whether we would be willing to accept subcontracted work from them.”

Funny As A Crutch. In the Donald Duck cartoon “Modern Inventions” (1937), the voice of Donald Duck, Clarence Nash, remembered, “I sat in on some of the story meetings and made some suggestions based on all the things I discovered I could make Donald do (voice wise). So they put in a sequence where Donald gets in the mechanical baby carriage and puts a coin in the slot and it sings ‘Rock A Bye Baby’ and he begins to squawk. I think this was the cartoon where a man in Canada laughed so hard He left his crutches behind when he left the theater.” 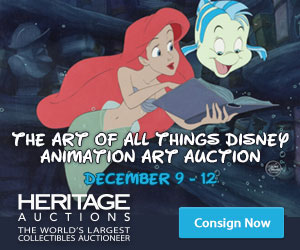 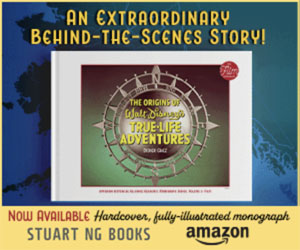 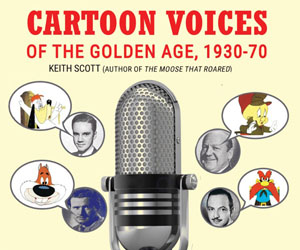