The Jam Handy Years of Greg and Tim Hildebrandt

Author’s note: This past October I had the honor of meeting and interviewing Greg Hildebrandt for my documentary on the Jam Handy Organization. This article is a brief look at Greg and his brother’s time at the studio.

The sound stages to the Jam Handy Organization (which did not house the animation department). Greg Hildebrandt recalls driving by the building as a child with his parents and thinking it was a jam factory. Him and his brother were oblivious that it was a film studio or that one of their favorite filmmakers Max Fleischer worked there. (Fleischer was not working at Jam Handy in 1957 when the brothers were hired, thus they never got to meet him).

The names Greg and Tim Hildebrandt are well known to fans of Star Wars, Lord of the Rings, The Secret of Nimh, The Trans-Siberian Orchestra, comics, pin-ups and fantasy. However long before their involvement with these they were producing art and animation for the iconic Jam Handy Organization. Though only employed at the company for about 6 years, 1957-1963, their time at the studio was a fantastic experience and one that had an important impact on their careers. 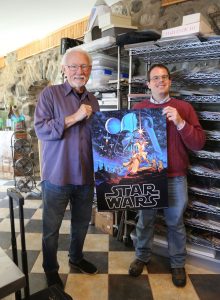 Both brothers were born on January 23, 1939 in Detroit Michigan, a city that was home to the automobile industry and also America’s largest film industry located outside of Hollywood and New York City. Greg and Tim’s father worked for General Motors in the company’s main stock room and throughout the 1940s worked his way up to be the Head of Supply for GM’s Chevrolet division. Amongst some of the contacts their father made over the years at GM were those at the Jam Handy Organization, as the company was General Motors’ go to for the production of training motion pictures, commercials, and filmstrips.

Throughout the brother’s childhood and adolescence they devoted much of their time to drawing; by age eleven they were animating their own flip books. After graduating from High School in 1957, Greg and Tim aspired to be Disney animators and attended a six month program at Detroit’s Mienzinger Art School. A school they found in the city that focused on Disney’s required skills: life/figure drawing, anatomy, and perspective.

During their six months, Greg and Tim put together outstanding portfolios, and after completing school their father asked if they wanted to show their work to the Jam Handy Organization. At the time, the brothers were clueless as to what Jam Handy was (and even believed at first that it was a jam factory) but were excited to learn that it was a film studio, and one of the lead producers of industrial films in the entire country. Their father was able to arrange a meeting with Otto Simunich, a VP at Jam Handy. At their meeting Simunich was impressed with what he saw, and that day brought both Greg and Tim over to the company’s animation department where they were introduced to Bob Kennedy (animation department head) and Frank Goldman. Both Kennedy and Goldman were impressed with the young men and hired them on the spot.

The next six years at the studio were what Greg consider’s to be the highlight of his and Tim’s career as they learned the filmmaking business from a studio that was “dedicated”, “fantastic”, and an “imaginative space”. (According to Greg, he and his brother should have been paying Jam Handy for the experience they were getting!) The first film they worked on was an animated training film for the United States Air Force (one of Handy’s main clients), to demonstrate a combat maneuver that had been developed for planes during the Korean War. Projects such as this along with other training films, TV commercials and filmstrips sponsored by various different organizations such as General Motors and Coca-Cola were the types of films the brothers were assigned to work on. While the projects were demanding (sometimes requiring work of up to 24 hours straight to get done) and frequently focused on uninteresting topics, they excited Greg and Tim as it taught them all aspects and stages of film production. In addition, as the subject matter and storytelling/presentation techniques varied per project, it gave them a wide experience working on different types of projects.

A Trade ad to a Jam Handy film Greg and Tim Hildebrandt styled the animation for. This film, half animated and half live-action, was sponsored by Excello (the creators of the wax milk carton) and chronicled the Hospital ship Hope visiting impoverished countries and donating powdered milk. The animated sequence (like The Ballad Of Soup Du Jour) featured artwork and backgrounds designed by Greg and Tim and was used to show how milk was produced from it’s early stages on the farm to it’s distribution stages to the ship Hope. As of 2020 the film is unfortunately missing.

Working at Jam Handy gave the brothers the privilege of working with a variety of different animators, many of whom were veterans from the major big name cartoon studios such as the Fleischer Studios, the Disney Studios and even the silent era’s iconic Bray Studios. Some of the animators were still even employees of other studios, such as Tom Moore who was employed at Paramount’s cartoon studio but freelanced for Jam Handy as a director of animation. Many of these animators whom the brothers worked with upheld a level of integrity and gave their work a high level of quality. They were people who never treated anything like it was below them, an important attitude that would stick with Greg and Tim throughout their careers. (This attitude was common throughout the entire Jam Handy Organization, which contributed to it receiving numerous CINE Golden Eagles and other awards for their films.) And, the animators they worked with were people who also had a friendly, but wild sense of humor that made the job fun. Antics and fun was encouraged by Bob Kennedy as he recognized it promoted creativity towards the various film projects, many of which focused on potentially boring subjects.

One of the Jam Handy filmmakers and animators who took an interest in the Hildebrandt brothers was Frank Goldman. Goldman, was a man who could without question be described as one of Jam Handy’s most important employees as he worked on some of the studio’s most ambitious projects and was the brains behind Jam Handy’s stop motion animation. This man who was as, Greg Hildebrandt described, ‘benevolent, soft spoken and very friendly’ began a ‘grandfather’ like relationship with the brothers and became the most influential to them. Very frequently they would have lunch together, which often consisted of going to a nearby Deli, buying bologna and having bologna sandwiches at the studio. The first project the three worked on together was a stop animation TV commercial for Speedway-79 gas, where Frank Goldman would direct and work as cinematographer, while Greg and Tim would animate the character puppets. Many of the projects the three worked on were elaborate stop animation television commercials such as this, where Frank Goldman directed and Greg and Tim animated puppets or other inanimate objects.

By the 1960s the Hildenbrandt brothers had earned the respect of many in Jam Handy’s animation department and in other departments. They also had additional responsibilities as they designed the production style to many of the studio’s animated films and sequences, and also drew storyboards for Jam Handy’s live action films. One excellent (and available) example that showcases the brother’s work is The Ballad Of Soup Du Jour, a 1962 animated film sponsored by Campbell soup and directed by Tom Moore. (Further detail on the film can be read in the author’s 2018 Cartoon Research article.) While Greg and Tim did not animate any scenes in the cartoon they were responsible for the film’s entire ‘UPA’ look as they designed the characters, and drew and painted all of it’s backgrounds.

In 1963 Greg and Tim Hildebrandt were offered the opportunity of a lifetime, that would lead to their departure from Jam Handy and Detroit MI altogether. Through contacts they made at Jam Handy, they received a unique offer from TV personality Bishop Fulton J. Sheen to work on a series of documentaries on world poverty. The bishop was a highly respected, famous Catholic TV and Radio personality, and as Greg and Tim felt this was their calling they took the job in a heartbeat. His production company was located in New York City, thus required them to move there from Detroit. Their departure was sad to many at the Jam Handy Organization, especially to Frank Goldman, as they saw Greg and Tim running the animation department in the coming years.

While there for only six years, their overall experience at Jam Handy was a priceless time as both Greg and Tim learned a tremendous amount from the company. The work they did gave them experience working on a wide range of different projects and allowed them to learn the filmmaking business first hand. Most importantly the people they worked with were highly influential and taught them a range of skills, integrity and diligence that would allow Greg and Tim Hildebrandt to prosper in their art and careers.

Jonathan A. Boschen is a professional videographer and video editor, who is also a film and theatre historian. His research deals with pre-1970s movie theaters in New England and also film history pertaining to the Jam Handy Organization, Frank Goldman, Ted Eshbaugh, Jerry Fairbanks, and industrial films. (He is a huge fan of industrial animated cartoons!). Currently, Boschen is working on a documentary on the iconic Jam Handy Organization.