Sweepings From the Chimney 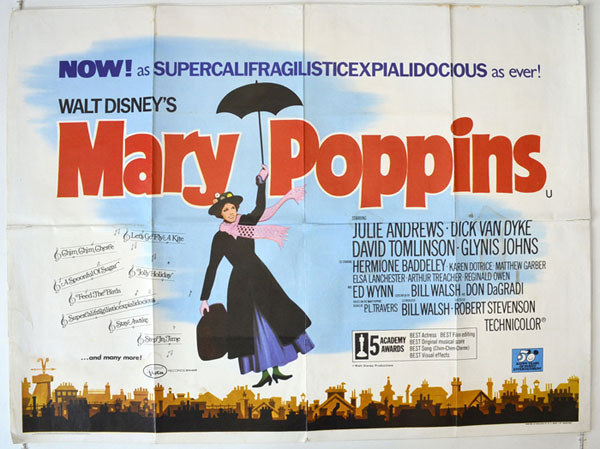 By the end of the summer of 1964, it was looking as though Mary Poppins was going to be big, Big, BIG!!! Not only at the theater box-office, but at record counters everywhere.

The Buena Vista soundtrack album was firmly ensconced in the Top Ten charts of the major trade publications (Billboard, Cash Box and Music Vendor) by the end of the calendar year. Greg Ehrbar talked about it at length here.

During the spring of 1965, it was pretty clear that there would be single 45 rpm releases of songs out of the score. In early March of 1965, Buena Vista – Disney’s own label – released a single containing Julie Andrews’ version of “A Spoonful of Sugar”, and (as a duet with Dick Van Dyke) “Supercalifragilisticexpialidocious”. Vista single F-434 got airplay on stations that would not play rock ‘n’ roll–stations such as KFI in Los Angeles, still an NBC affiliate, but devoted to “Easy Lisening” or “traditional Pop” sounds. That was a station where you were not likely to hear the Beatles, the Rolling Stones, nor any of the “Motown” sounds.

The March 6th, 1965 issue of Billboard had a full-page advertisement for several new Liberty albums, as well as covering a new single #55773), on which the Chipmunks perform the song from the “Poppins” score, with the sesquipedalian title. This, and its flip side, ‘Do-Re-Mi” from the upcoming film version of “The Sound of Music”, may have been lifted from “The Chipmunks Sing With Children”, the latest album for Simon, Theodore and Alvin (which Mr. Ehrbar wrote about here).

On a gentler note, the ballad “Chim Chim Cher-ee” found itself on a couple of singles. Buena Vista issued a studio performance by Dick Van Dyke performance on #F-4442, coupled with an additional studio version of “Step In Time”. Slightly more successful as a single was a Columbia release by The New Christy Minstrels, who had enjoyed several big hits over the previous two years. Randy Sparks’ choristers entered the Billboard “Hot 100” with the April 24, 1965 issue, spending five weeks on the chart, and getting no higher than #81 in the process. All this while the soundtrack album (on BV) was topping the LP charts, surmounting The Beatles, and any other artists.

It was true Poppins-mania that year and there was evidently no end to performers and bands covering the soundtrack from the hit movie. Here are two – from two ends of the musical spectrum. Folk singer Burl Ives doing Chim Chim Cheree (for Disneyland Records) and Lawrence Welk performed an entire album of Poppins pop tunes.

The interest in these songs as singles-fodder tends to coincide with the buildup to the Academy Awards ceremony on April 5 of that year. That was the night (a mild Monday night) when “Chim Chim Cher-ee” took home one of those little gold statuettes for “Best Song”.

Interest also developed in another curious direction. In 1965, the Sherman Brothers, and even Julie Andrews herself, were dragged into court as Defendants on an infringement suit by Gloria Parker (aka Patricia Smith) and Barney Young (aka Don Fenton), under the nominal case heading of Life Music, Inc. v. Wonderland Music Co., 241 F. Supp. 653 (U.S. District Court, Southern District of New York). The grounds: that the Shermans had allegedly ripped-off their mile-long title above from a number penned by Parker and Young, titled “Supercalafajilistickespeealadojus (The Super Song)”, recorded approximately 1949 by Alan Holmes and his New Tones for Columbia Records. They went so far as to claim the melody had been swiped from them too. A preliminary injunction was sought to restrain all performance, copying, using or playing of the Shermans’ song.

On the music side, the court stated that it had listened to records of both works, “and, in my opinion as an average observer,…there is no discernible similarity between the music of both songs.” You can be the judge, by giving the song a listen. I am in total agreement with the judge on this finding.

As to the title, Young testified that he had coined what the court referred to in shorthand as “the word” in Lawrence, Massachusetts as a child in 1921, but that it was “not known to the public until the publication of plaintiff’s song.” However, the Shermans submitted their own affidavits, as well as those of many others, claiming that various versions of the word had been known to them considerably before 1949. Emphasizing that infringement requires both a showing of similarities and of copying, the court found that public knowledge of the word defeated an inference that the Shermans’ use of the word had resulted from copying the plaintiffs’ song. The court didn’t go so far as to find that Young hadn’t created the word – just that letting it become public knowledge killed his chances of proving that the Shermans took it from his song.

The court denied the injunction on a further interesting ground. Emphasizing the harshness of an injunction as a remedy, the court pointed out that granting of such relief usually involves protecting of a work that is in direct competition with the infringing composition. However, the court found there was no direct competition nor likelihood of irreparable injury to the plaintiffs, as they had not collected a dime of royalties on their song in years! Even their publishing house had “for all practical purposes…gone out of business.” Parker and Young weren’t just down on their luck, but out of same altogether, as far as the court was concerned.

The story doesn’t end there. Having been beaten resoundingly in one court, and also failing to “perfect” a right to appeal the decision, Parker and Young turned to the desperation move of filing new lawsuits essentially duplicating the same charges they had already raised against the Shermans et al. in the first case. The Defendants returned to the United States District Court on October 24, 1967, obtaining an additional order enjoining the Plaintiffs from filing new duplicate lawsuits, and staying the ones they had already filed! Plaintiffs, the would-be enjoiners, now received a dose of their own medicine, and an award of costs and fees in favor of defendants to boot!

Such is the fate of those that aspire to the fame (or royalty checks) that come with Oscar. And, to this day, when you hear a song over the credits-crawl of an animated feature, you can bet that everybody is hoping for that little gold statuette.

(Special Thanks to Charles Gardner. Greg Ehrbar has written about other Mary Poppins covers here and here)