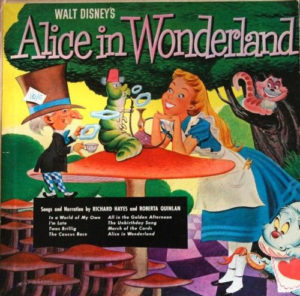 As the calendar turned from March to April of 1951, more of the major record companies began to cover the songs that wee expected to be featured in the upcoming Disney feature, Alice In Wonderland.

Mercury Records – one of the newest firms to achieve major-label status – decided to give the title song, “Alice in Wonderland” to a thrush known as Roberta Quinlan. Miss Quinlan – a comely blonde from the looks of the black-and-white ads in “The Billboard’–never became a big record star, although she did some nightclub work and appeared on television.

Five weeks later, she would be paired with Richard Hayes–a singer that Mercury hoped would fill in the void left by Frankie Laine. It didn’t work out. Hayes did have a long career, and was heard on Arthur Godfrey’s last radio shows in 1970 and 1971.

He and she got to duet on a medley of “I’m Late” and “The Caucus Race”, which was coupled with a version of “The Unbirthday Song” on Mercury 5639. It didn’t sell in good quantities.

Columbia Records was one of the biggest companies in the field of popular records. The firm had one of the most potent rosters of popular artists going. So, at lezst one of their top-tier artists got to do the big ballad from “Alice”. Doris Day–one of Columbia’s top stars–got to do ‘Very Good Advice” on Collumbia 39295.
Columbia did no give his piece the push it needed.

At about the same time, Columbia give “I’m Late” to Alan Dale, one of thse Italianate crooner that was so rife at the time, what with Frank Sinatra, Perry Como, Phil Brito, Frankie Laine (ne Lo Vecchio), and the up-and-comer Tony Bennett (born Antonio Benedetto). Dale would have his biggest hits around 1955–but he wouldn’t become as big as some of he others mentioned above.

With the issue of April 21, 1951, Coral Records–a subsidiary of Decca–would get into the fray,with two of their best-known acts. On Coral 60438, Les Brown and his Band of Renown got to do a swinging arrangement of “‘Twas Brillig”, as well as “Very Good Advice”. Both featured vocals by Lucy Ann Polk–but they swung well.
Too bad they didn’t sell well.

And on Coral 60439, the Modernaires–one of the best-known vocal groups going–got to warp their chops around “I’m Late” and “Alice In Wonderland”. But the pubic didn’t show any particular interest in this pairing, either.

In the April 28th 1951 issue, Decca showed that the were still interest in the “Wonderland” score. Their leading comic singer—Danny Kaye–was allowed to do “I’m Late” and “Walrus and the Carpenter” on Decca 27564.
Both these numbers suited Danny Kaye’s style and delivery–far better than I Taut I Taw A Puddy Tat had done. But, again–the public didn’t seem too interested.

Nor was Capitol able to move a lot of copies of “Very Good Advice”, as sung by the Dinning Sisters on Capitol (F)1511,also advertised on the 28th. The Dinnng girls sang in attractive close harmony, but they weren’t hitting very well in 1951.

Next: Stragglers in Wonderland