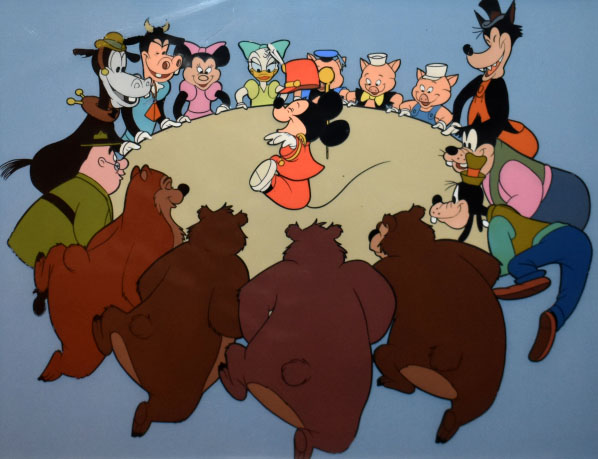 By 1955, Walt Disney Music, Inc–which would eventually be known as Wonderland Music–was finding that hit songs did not necessarily have to come from animated shorts or features. In fact, the publisher’s biggest hits came from a television show.

“The Ballad of Davy Crockett” was the national earache of the first half of 1955. What’s more, other songs from the “Disneyland” mini-series of Davy’s adventures were getting recorded, too–even if they didn’t become hits. 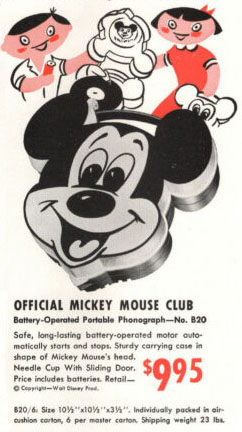 Then there was The Mickey Mouse Club. This program–well-remembered by those who saw it in its day–included not only animation (including classic Disney cartoon shorts), but live-action segments, a cast of well-scrubbed young talents–and a young actor/songwriter who got the best gig he ever had in his entire career.

Even before the show premiered, Disney was showing signs of getting into the record business itself–something that had not been done by Disney before.

Disney’s first venture into the record field for itself was a three-way joint venture between the Studio, the publishers Simon and Schuster, and a new record company that was just getting organized: ABC-Paramount Records.

The first products of this joint venture entered the children’s record market in the fall of 1955. These were the “Official Mickey Mouse Club” records–ten-inch discs, on orange plastic, recorded by ABC-Paramount (commonly called “Am-Par” in the trade), and distributed by Simon and Schuster, through the channels by which their six-inch Golden records were distributed.

These discs usually show up as ten-inch (twenty-five centimeter) records, injection-molded in orange polystyrene. The result was a record with a smooth, quiet surface when new–but which did not wear well, as the plastic was too soft to withstand the treatment from kids–and from the record-players of the day (especially the ones aimed at the kids.)

It didn’t take long for the various partners in the venture to notice that “Mickey Mouse Club” was attracting not only the kids (in staggering numbers!), but their parents as well.

By the beginning of 1956, Am-Par was starting to market ABC-Paramount records to the grown-up audience.

And among the early releases were some that were, or appear to have been drawn from the “Official Mickey Mouse Club” recordings. 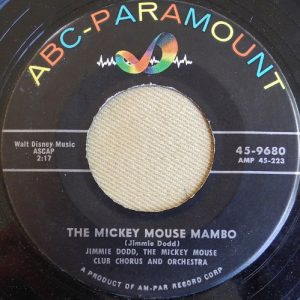 By the way, the “Paramount” in the label name comes from United Paramount Theaters–a company spun off from Paramount Pictures when that studio had to divest itself of its chain of motion-picture theaters in 1948. The theater people bought the American Broadcasting Company in 1953, allowing ABC to defeat DuMont in its attempts to be the “third network” behind CBS and NBC.

The firm–known in the trade as Am-Par–advertised heviily in the “trades” of the day–especially in “Billboard and “The Cash Box”.

The January 14th, 1956 issues of both publications featured multi-page ads for the latest realeses from the new firm. These releases included #9665, which was billed as “Mouseketeer Theme Song”.

Four weeks later, in the February 11, 1956 issues, there would be adverts for #9680, which featured selections from the Official Mickey Mouse Club Records, which were produced by Am-Par in late 1955. One side of this release featured two of the “Mousekedances”–“The Pussycat Polka” and “The Humphrey Hop”.

The other side featured Jimmie Dodd–whose career in Hollywood had hadn’t amounted to much before he became part of “Mickey Mouse Club” in 1955 – performing “Mickey Mouse Mambo”, a Latin-tinged arrangement of the show’s opening theme.

The Mambo spurred some “cover” activity. The Lennon Sisters–one of Lawrence Welk’s satellite artists–covered “Mickey Mouse Mambo”: for Coral Records. (Their version was coupled with another “MMC’ song, ‘Hi! To You”, on which they were joined by subteranean basso Larrry Hooper).

Another “cover” of the Mambo came out on the tiny Real label, performed by Lalo Guerrero, who had come to the attention of Anglo music fans with his mid-50s parody of “The Ballad Of Davy Crockett”, named “Pancho López”.