More Cartoon Music – For Radio Only 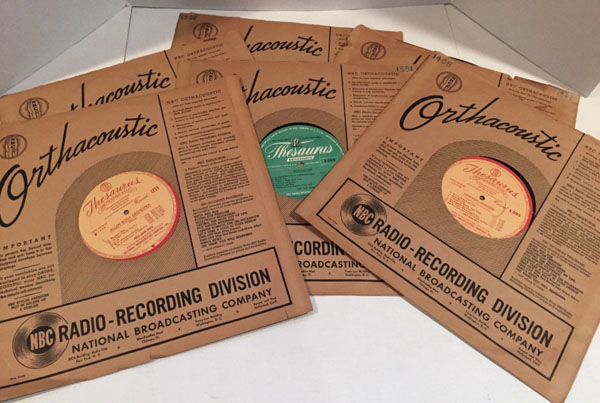 When a radio station subscribed to a transcription service–be it Thesaurus, Standard, World, Associated, or whomever–they would get a large package of sixteen-inch discs every so often–perhaps every month, or every fortnight. (By comparison, the familiar long-playing record is only twelve inches in diameter). The station could program these recordings in any way they saw fit–and they’d receive handy hints on programming from the service,as well. When their lease expired–if it was not renewed, that is–they’d send the discs back to the firm that sent them in the first place.

Early on these discs were made out of the same shellac compositions that were used for commercial records. Discs that big were as heavy as small manhole-covers. So, there were efforts to make lighter discs–ranging from the use of what amounted to laminated paper discs to primitive precursors to the vinyl with which most of us are familiar.

As we have discography for the NBC Thesaurus line of transcriptions, we’ll continue where we left off.

When “Gulliver’s Travels” came out, Thesaurus went with the two big songs from the picture. Both “Faithful Forever” and “Bluebirds In The Moonlight” were given to a band that had a long-winded billing: “Music of Yesterday and Today, Styled the Blue Barron Way”.

Blue Barron had yet another stylized “Mickey Mouse” band, similar in many respects to that of, say, Sammy Kaye. They had become regulars on Bluebird records, although they did not have the one big hit that would put them over. 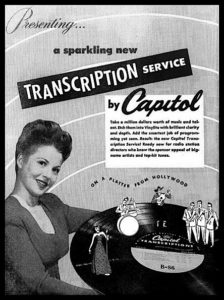 With the “PInocchio” song score, again, Thesaurus seems to have only dipped a little bit into it. They did have recordings of “Turn On The Old Music Box” and “When You Wish Upon A Star”. These were given to Al Donahue and his orchestra–a swing band, of sorts. Donahue had been a regular contributor to the monthly lists of the Vocalon label (and would continue when Vocalion gave way to a revived OKeh marque in 1940).

Thesaurus seems to have ignored the scores from both “Dumbo” and “Mr. Bug Goes To Town”. But they did cover “The Reluctant Dragon”–with the same band that had recorded it for the Victor: Swing and Sway with Sammy Kaye. The same vocalists were used, and it’s probably difficult to tell one version from another.

When it came to the score from “Bambi”, Thesaurus rushed to get two performances in the can before the notorious AFM strike began on August 1, 1942. “Love Is A Song” was given, again, to Sammy Kaye’s orchestra.

Another song, associated with the score of”Bambi” did get recorded, not only by Thesaurus, but by Associated as well. This was “Twitterpated”, a number that does not seem to have been recorded commercially at the time. Disney hadn’t forgotten it altogether — It eventually appeared on a Disneyland LP in the 1950’s by Thurl Ravenscroft:

Thesaurus gave “Twitterpated” to Dick Jurgens’ orchestra. Jurgens main popularity was centered in the Midwest, and his sides, whether for Vocalon, OKeh or Columbia commercial records, or for Thesaurus transcriptions, were cut in Chicago.

Associated–one of the producers of high-fidelity “vertical cut” transcriptions–gave this song to one Harry Breuer, a manipulator of the xylophone and vibraphone, who led a “novelty” quintet for the transcription service.

There is still much research to be done in this field. Most collectors cannot play transcriptions–those humongous discs just will not fit on most folks’ turntables. But there is much good music trapped within those grooves, and collectors who have the will shall work to discover what is there. 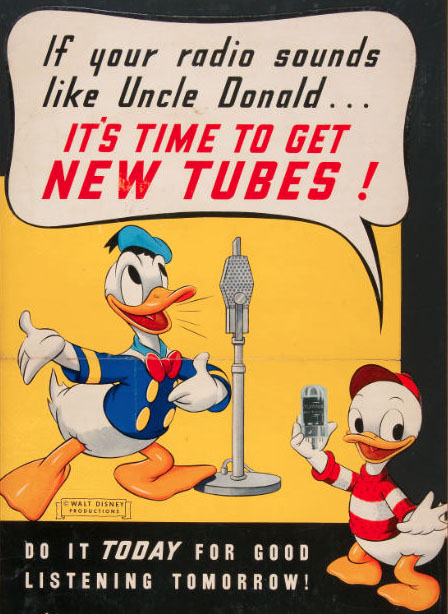