Eight years before Mickey’s Christmas Carol was an Oscar-nominated short cartoon, it was a Disneyland LP and book set called Dickens’ Christmas Carol Presented By The Popular Repertory Company, The Walt Disney Players. Here’s how it went from record player to big screen.

Actor, writer and ought-to-be-an-official-Disney-Legend Alan Young was surprised one day in the early ‘70s by a phone call from his college chum Gary Krisel, who was just promoted to supervisor of product development at Disneyland-Vista Records. There was a series of illustrations lying around that he wanted to make into a record album.

The art depicted Charles Dickens’ A Christmas Carol with Mickey and his friends in the classic character roles. A member of the Dickens society in his native Canada, Young was a natural for the job of fashioning a script from the concept. He partnered with Alan Dinehart; a TV writer and voice director whose many projects included iconic Hanna-Barbera cartoons.
For this reason, the finished record album is like no other Disney record ever produced, cast with actors that rarely, if ever, did voice work for Disney projects. Veteran actor Walker Edmiston at the time was busy doing voices for Sid and Marty Krofft shows like H.R. Pufnstuf and Sigmund and the Sea Monsters. Hal Smith did countless H-B voice roles as well as playing Otis on The Andy Griffith Show.

And this was the only Disney record to feature the lovely Janet Waldo, with the possible exception of educational materials. For Walt Disney Imagineering, Waldo voiced the Grandmother and angry neighbor in the 1993 version of Walt Disney’s Carousel of Progress, and she voiced Maleficent in a Disney presentation at the Hollywood Bowl.

Disney Legend Buddy Baker, whose magnificent music swirls through many a Disney attraction, wrote the music for the Christmas Carol album. Tom Adair, a prolific comedy writer and lyricist, including material for Sleeping Beauty, the Pioneer Hall Hoop-Dee-Doo Revue and the unproduced Rainbow Road to Oz, wrote the Carol lyrics with his wife, Frances.

Young stayed fairly close to the narrative and peppered it with amusing one-liners. Always a humble and generous soul, Young shared writing credit with Dinehart because of one particular line from Willie the Giant as Christmas Present: “Take hold of my robe. Duh, not back there, unless you want to fly tourist.”

Little did Alan Young know after this album was completed and released that it would lead—in a roundabout way—to a role he would play for over 35 years.

GIVE A LITTLE LISTEN
“Graveyard Scene with Scrooge and the Witch”
The original album cast the Snow White hag as the Ghost of Christmas Yet to Come. Janet Waldo, who loved to stretch as a voice actor, brings the same menace as when she voiced Maleficent for the Hollywood Bowl.

When Burny Mattinson was assigned to direct the first Mickey Mouse featurette since 1953’s The Simple Things, it was an adaptation of A Christmas Carol that existed as a Disneyland Record. Neither the album jacket nor the record label listed any script or voice credits, so no one knew, or checked on, who was responsible for the original recording. 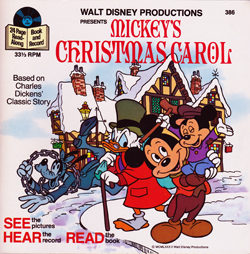 An actor friend of Alan Young’s approached him for advice on how to do a Scottish burr. Young, who had to work to lose his natural burr when he was a young actor, was happy to help. But when he saw the script, he realized he had written it himself, years earlier. When Young decided to audition for the Scrooge McDuck role as well, a Disney staffer told him that they had considered him for the part but didn’t think he would be interested.

Actually, Alan Young was the third actor to voice Scrooge McDuck. The first was Dal McKennon for the 1960 Disneyland LP, Donald Duck and His Friends. Bill Thompson voiced him in the 1967 film, Scrooge McDuck and Money. Young made his Scrooge McDuck debut with the 1975 Christmas Carol album, played him again in the 1983 film, then solidified the role with the hit TV series Duck Tales in 1987. Ever since, Young has voiced Uncle Scrooge in everything from Disney Parks live shows to subsequent Walt Disney Records releases.

The release of Mickey’s Christmas Carol (on a double-bill with a reissue of The Rescuers) prompted a reissue of the earlier recording. Through some clever editing, the scenes with Ratty and Mole, Christmas Past and Christmas Future were replaced with the film sound track excerpts. Virtually the entire album remained unchanged story-wise, but most of the songs were shortened and one was cut completely.

I remember going to see Mickey’s Christmas Carol with anticipation that the Baker/Adair songs were going to be part of the cartoon. Instead, a very nice new song opened the film: “O What a Merry Christmas Day” by arranger/conductor Irwin Kostal and Fredrick Searles. All the other songs were not to be heard. Mickey’s Christmas Carol is, after all, a 26-minute film and not a musical TV special or feature. And delightful as the original album songs are, they don’t quite stack up to the indelible Bob Merrill/Jule Styne songs for 1962’s Mr. Magoo’s Christmas Carol.

Four different Disneyland products were released to tie in with the film: a picture disc (front and back below), a 7” read-along book and record or cassette, and a standard vinyl LP with a revised version of the book (including the script) that was exclusively sold at Radio Shack stores.

None of these editions were released on CD (except for scattered songs on various Christmas compilations), but the 1983 Storyteller is available for download on iTunes. Mickey’s Christmas Carol, the film, has just been released for the first time on Blu-ray.

GIVE A LITTLE LISTEN
“Graveyard Scene with Scrooge and Pete”
Notice how little of Alan Young’s script has changed, even though it’s now Pete as the ghost, played by the multi-talented Will Ryan. This is one of the sections from the sound track of the film that was incorporated into the revised 1983 records.