Steve Stanchfield’s recent post about obscure animated features had me thinking about one of my favorite guilty pleasures – Johnny The Giant Killer. However, there is little to like about this film – the fact that it ever achieved a North American release is the true “miracle” of its production; it’s public domain status assures it’s continued existence. 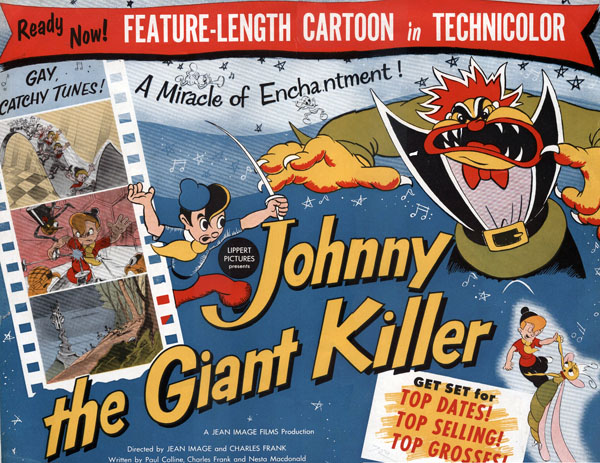 STORY: A group of boys explore a castle and are captured by a giant. Johnny escapes, becomes allies with a swarm of bees, and helps the other boys escape. 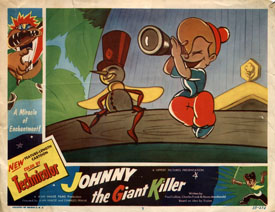 Produced in 18 months with a low budget and a tiny staff, Hungarian-born cartoonist Jean Image (Imre Hajdu, 1911-89) managed to produce France’s first animated feature, Jeannot L’Intrepide (The Intrepid Jeannot) in 1950. The film went on to win the Grand Prix for children’s films at the 1951 Venice Film Festival and was eventually picked up and released in the United States (by B-movie distributor Lippert Pictures) in 1953. Re-titled Johnny the Giant Killer, it was one of the very first foreign animated features to hit the states – preceded only by Russian made The Magic Pony (1949) and Jiri Trinka’s Czech puppet feature The Emperor’s Nightingale (1951) – and one of the first non-Disney cel-animated full-length movies.

I only have three problems with this film: The character designs are poor, the animation is terrible and the storytelling is atrocious. Yet, I can’t say you won’t find this film entertaining in a Mystery Science Theatre, “so-bad-its-good” way. Nevertheless, as poor as the film is (the cheapest American cartoons of the day were far more superior to this on every technical level), it still boasts the then-novelty of Technicolor, and the musical score is quite lively.

Rene Cloeric (1911-1995), the film’s musical director, had previously written songs for Edith Piaf and scored the French classic Devil in the Flesh (1949). Doing the music for France’s first animated feature must have seemed like an honor. “In live action films, particularly dramas, music is used to highlight certain moments,” Cloeric was quoted at the time. “A dramatic picture may have as little as three minutes of music. But in animation, music runs all the way through the picture.

The film has since drifted into obscurity (as it should), save for the fact that it was never copyrighted, and is easily found for sale, lingering in cheap video bins around the world. Mark Kausler allowed me to screen his Technicolor 35mm print for Asifa-Hollywood a few years ago and it was a hoot. Here’s a clip to give you an idea of the animation quality:

Here is some of the ballyhoo Lippert Pictures was hoping to whip up during its US release – from rare pages of their press book: 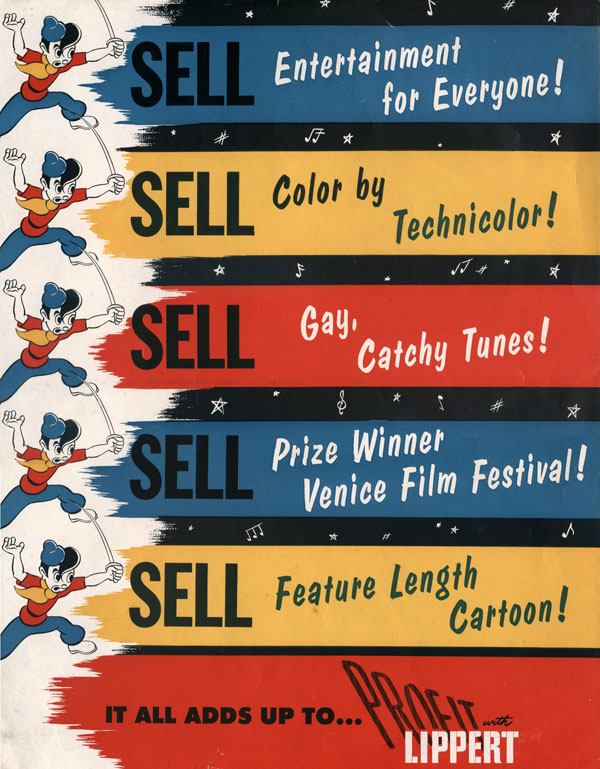 Apparently the film was restored and had an anniversary re-release in France in 2010 – here is the trailer which makes it look a lot better than it is: