Jay Ward’s Original “Rocky and His Friends” on Records 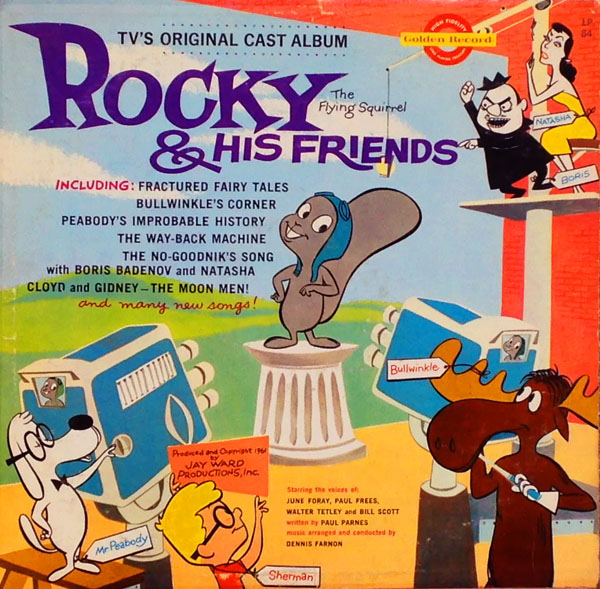 [The following is revised and enhanced edition of an earlier post.]

When Golden Records was licensing cartoon characters for records from the postwar era through the birth of The Beatles, sometimes they would bring in original cast voices and sometimes it was not possible. In the case of Jay Ward’s classic creations, the album features not only the actors who created the voices, it also presents the characters in a way true to the spirit of the cartoons. In short, it is one of the best cartoon record albums of the era. 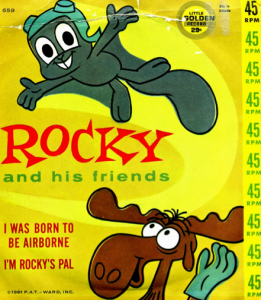 June Foray, Bill Scott, Paul Frees, Walter Tetley, five actual soundtracks, a witty script worthy of Ward and bouncy original songs arranged and conducted by one the show’s musical staff that has the same tone as the series music—and a brisk pace that matches the cartoon style! What more could a Jay Ward fan want?

Well, if one were to quibble, none of the themes or music cues from the actual Ward library are included. When Rocky and His Friends premiered in 1959, it was unlikely that the licenses for commercial recordings were acquired at the time, otherwise the music would have been included. After the fact, it would have been necessary for Golden to purchase these pricey rights and pay musician fees, which would easily exceed the profits of the album itself, which retailed for $1.98 (and usually sold for less in most stores).

Nevertheless, for the average Golden Record of its day, this is a comparatively expensive album. It was recorded in LA, used the actual voice actors and a small orchestra. Add in travel and expenses and you get an album that had to cost much, much more than, say, Golden’s Songs and Games of Fitness with Posture Pete, which consisted of one narrator and a tiny circus calliope.

Though Parnes is credited as writer, the reflexive fourth-wall humor that constantly calls attention to the recording (“And now, ten seconds of needle scratch…”) suggests that Bill Scott and Jay Ward contributed some tweaking.

The album must have been in production and release just shy of the title change from Rocky and His Friends to The Bullwinkle Show in 1961. What might surprise some is that the denizens of Frostbite Falls had been on the Jay Ward drawing boards since the early fifties, when he and his early partner, Alex Anderson, were working on Crusader Rabbit. But that’s another story covered in fascinating detail by author/actor Keith Scott in his indispensable, comprehensive book entitled Jay Ward Productions, The Moose That Roared: The Story of Jay Ward, Bill Scott, a Flying Squirrel and a Talking Moose.

Animator and story artist Alex Anderson and Jay Ward were college friends. In the late forties, Anderson was working at Terrytoons in New York for his uncle—Paul Terry. It was the late forties when Anderson suggested to Terry that they experimenting with TV animation. Terry was not interested (and knew that their contracted studio, 20th Century-Fox, was opposed to TV, as were all the major studios), but he was supportive.

Anderson eventually teamed with Ward in California to create what became Crusader Rabbit in 1950. Sometime around 1951, they had a pitch for another series called Frostbite Falls Review, which featured among its characters a flying squirrel and a “French-Canadian moose.” Some scripts were prepared along with the board, but the series did not sell. After legal problems hopelessly entangled Crusader Rabbit, they turned to the Frostbite Falls characters. 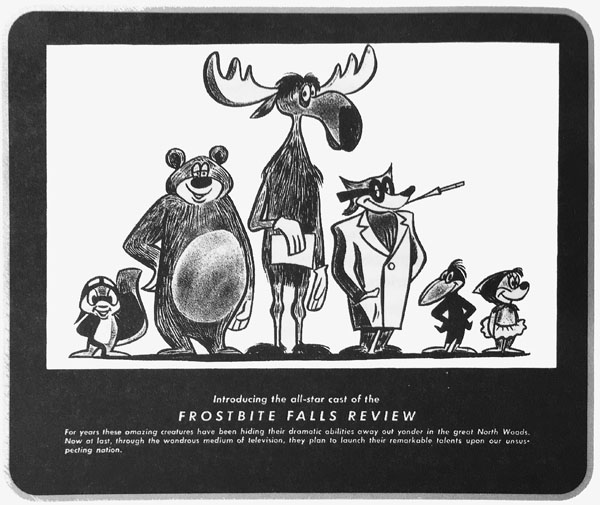 There are many more fascinating details in Scott’s book, but in short, Anderson went into a lucrative (and to his mind more secure) career in advertising, though he consulted with Ward on the development of the eventual Rocky and His Friends series. His brand of pun-tastic, two-tiered humor that poked fun at the pompous was a perfect match for the irreverence of Ward, Bill Scott, the writer, artists and actors who made the cartoons so well-loved and long-lasting.

This recording opened the ceremony when the life, career, heart and soul of June Foray was celebrated at the Samuel Goldwyn Theater on September 19, 2017.

Because it does not have Frees’ intro and the sound effect pauses, arranger/conductor Farnon was able to create a slower instrumental version in the same time frame as the vocal version. Note that the musicians do not pause at all for the swooping sound effects, but play through smoothly. 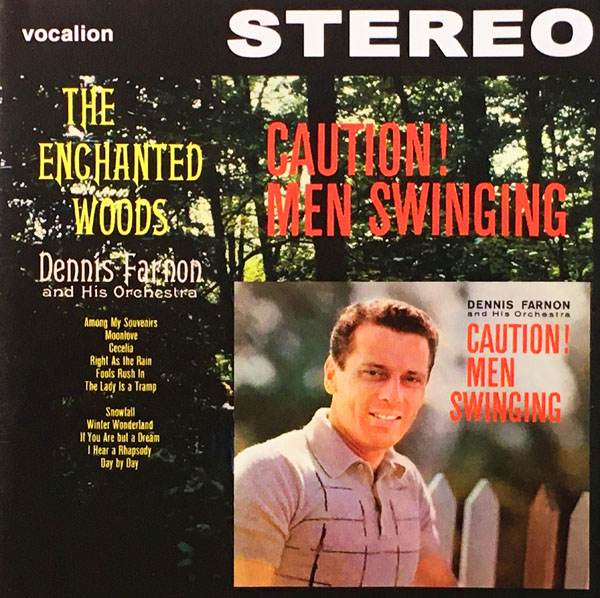 Music: “Caution! Men Swinging,” “Resume Speed” by Dennis Farnon; “Spring Will Be a Little Late This Year” by Frank Loesser; “Lover Come Back to Me” by Oscar Hammerstein II, Sigmund Romberg; “Just You, Just Me” by Jesse Greer, Raymond Klages; “Isle of Capri” by Will Grosz, Jimmy Kennedy; “South of the Border” by Michael Carr, Jimmy Kennedy; “It Don’t Mean a Thing (If It Ain’t Got That Swing)” by Duke Ellington, Irving Mills; “Why Don’t You Do Right” by Kansas Joe McCoy, Herb Morand; “Three Little Words” by Harry Ruby, Bert Kalmar.

Music: “Among My Souvenirs” by Horatio Nicholls and Edgar Leslie; “Moonlove” by Andre Kostalanetz, Mack Davis and Mack David; “Cecelia” by Harry Ruby and Dave Dreyer; Right As The Rain” by Harold Arlen and E.Y. Harburg; “Fools Rush In” by Johnny Mercer and Rube Bloom; The Lady is a Tramp” by Richard Rodgers and Lorenz Hart; “You Are Too Beautiful” by Richard Rodgers and Lorenz Hart; “Snowfall” by Claude Thornhill; “Winter Wonderland” by Felix Bernard and Richard Smith; “If You Had But a Dream” by Nat Bonx, Moe Jaffe and Jack Fulton; “I Hear a Rhapsody” by George Fragos, Jack Baker and Dick Gasparre; “Day by Day” by Sammy Cahn, Axel Stordahl and Paul Weston.

Versatile, idiosyncratic UPA and Jay Ward composer Dennis Farnon, as we have explored back on Mister Magoo’s birthday), was also an accomplished recording artist. This British release combines two classic RCA Victor albums from the golden days of high-fidelity and “Living Stereo,” when the home entertainment center was all about how cool it was to hear things coming from different parts of the living room.

On the surface, both Caution! Men Swinging and The Enchanted Forest look like typical easy listening instrumental albums of the Eisenhower/Kennedy era. And for the most part, they provide pleasant instrumental music for relaxation or background enjoyment.

What makes these a little different is that they occasionally dip into the deep end of the crazy pool. On the whole, Caution! Men Swinging is essentially a light pop-jazz album in the Doc Severinsen-Tonight Show with Johnny Carson vein. However, “Isle of Capri” goes into a strange, lighthearted discord, staying somehow within the confines of a “respectable” arrangement.

The Enchanted Forest offers a romantic respite from suburban stress. Two selections stand out from the rest of the album—“Winter Wonderland” and especially “Cecilia”—with their the bouncy, silly feel of a classic Jay Ward music cue. Yet they somehow still fit in among the rest of the more lush, elegant selections. It takes real skill to make this work as a whole.

The Enchanted Woods is also notable for Farnon’s decision to use only woodwinds to showcase their versatility. While you’ll hear percussion and rhythmic touches, it’s all about the enchanted woodwinds, folks.

Farnon’s family is linked to animation through two of his nieces. Shannon Farnon voiced Wonder Woman on Hanna-Barbera’s Superfriends and Darleen Carr was “That Girl” in Walt Disney’s The Jungle Book. His other niece was Charmian Carr, who played Liesl in 1965’s The Sound of Music. His older brother Robert was also a renowned musical director and composer (so it’s sometimes easy to get the two confused, as they both show up on numerous albums).

GIVE A LITTLE LISTEN
“Cecilia”

One of the two whimsical arrangements on The Enchanted Woods, this track combines the Jay Ward/Rocky & Bullwinkle sound with a jaunty, David Seville style familiar from The Alvin Show. 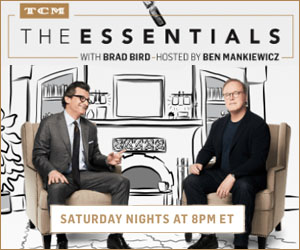