Jasper and the Puppetoons – Part 3 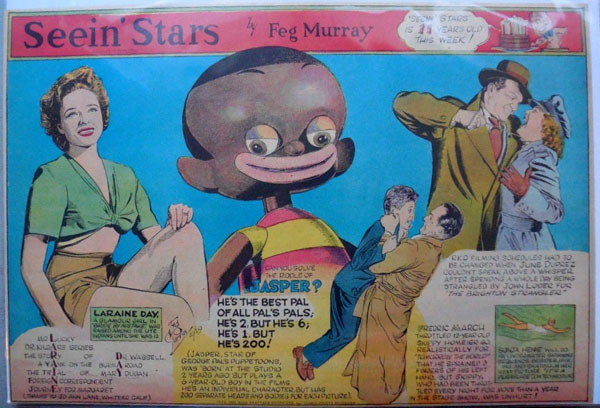 Whereas Paramount Pictures first promoted its fictional animated figure Jasper as a major cartoon star in 1943, the year 1944 was when Jasper actually became a big star. His celebrity attracted multiple major figures in commercial art. In February producer/director George Pal celebrated the second birthday of his figures Jasper and Scarecrow with a cake at Paramount’s studio in Hollywood. Feg Murray presented Jasper in the King Features Syndicate comic strip Seein’ Stars that same year. In return Pal presented a model of Jasper to Murray, according to Motion Picture Herald. Jasper was so popular that Warner Brothers’ marquee cartoon star Bugs Bunny made a cameo appearance in a “Jasper” episode.

On the one hand, that film–Jasper Goes Hunting–provided another “first” for Pal–a film starring major characters from multiple studios. Mel Blanc was already voicing exclusively for Warner Brothers when he lent his voice to Paramount for Bugs’s cameo. Due to the location of Paramount’s Fleischer Studio and Famous Studio in New York and Florida, the California-based Blanc was not a staple in the distributor’s films. Thus, this episode allowed the biggest cartoon vocal star, the biggest drawn-animation star, and the biggest puppet-animation star to appear together. 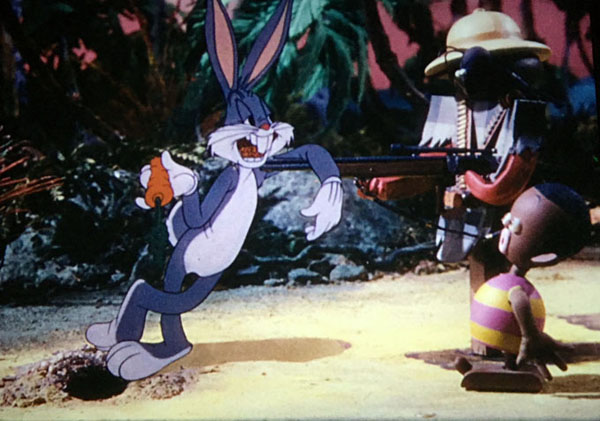 Bugs Bunny’s cameo in JASPER GOES HUNTING (1944) – This frame is from a UCLA Archive restoration in progress, funded by Asifa-Hollywood

On the other hand, Jasper Goes Hunting demonstrates Pal’s tendency to use gimmickry to strengthen flimsy stories and hoary stereotypes. In this case, Pal’s use of Bugs Bunny provided the gimmick of the celebrity cameo. Puppetry had already buttressed some thin stories from the past two years, but by 1944 puppetry itself was no longer enough. Still, Paramount and Pal could not make Bugs a co-star for the rest of the “Jasper’ series, and it would have been expensive to try to arrange for guest stars from other studios for every further episode. After an appearance from Bugs Bunny, where else can a cartoon series go creatively? In Package for Jasper, even the Crow complains, “Here we go again!” 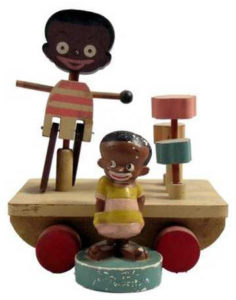 Jasper’s hit status allowed him to be marketed as toys and in children’s books.

In 1944 four of Pal’s six cartoons for Paramount starred Jasper, and the formula for the thin stories is repetitive. As in previous years, the Scarecrow either involves Jasper in schemes or tells tall tales about his life. Scarecrow acts as Jasper’s dentist in Say Ah, Jasper and tries to steal a gingerbread cookie in Jasper’s Paradise. He pretends to be a great hunter in Jasper Goes Hunting and a skilled musician in Package for Jasper, which is very similar in story to Jasper’s Music Lesson.

Dialect is in heaps with phrases like “you is” and “done got,” and Jasper’s mammy-figure mother returns for two of the episodes. Jasper’s domination of the Puppetoons in 1944 means that these shortcomings dominated Pal’s work for that year.

However, there are creative and daring moments in some episodes. Bugs Bunny’s cameo is one of the more innovative moments of the year’s releases if not in the entire “Jasper” series. Also, Pal experimented with the imaging of social customs regarding African Americans. In Package for Jasper, the boy receives a box addressed to him. The address reveals Jasper’s last name as Hawkins. His middle name is Jefferson Lincoln Washington–a nod to the trend among some free African Americans to name their children after Founding Fathers and the Great Emancipator. 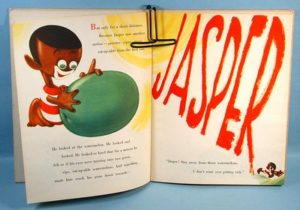 More importantly, Jasper is given the title “Mr.” on the package; during the Jim Crow years, African Americans were commonly addressed by people outside of their communities with only their first name or nicknames “Boy” or “Auntie.” They were rarely given formal titles of respect like “Mr.” Also, the postal worker in the film is African American–a departure from the sharecroppers and domestic servants usually populating movies. In Jasper Goes Hunting, Jasper holds a gun, and he imagines himself as a wartime soldier. This frolicking African American wartime soldier-as-child was on a par with musical soldiers of Walter Lantz’s Boogie Woogie Bugle Boy of Company B but was not as crude in ethnic caricature as Schlesinger’s Coal Black an de Sebben Dwarfs or Columbia’s Old Blackout Joe.

With a hit on his hands, Pal suddenly had to decide how to maintain Jasper’s “hit” status. Would he stick with a formula beginning to show its age? Or would he evolve his breadwinner?