“The Jetsons” on the Record
Michael Sporn Remembered: His Interview With Jack Mercer
LOST PLANET ANIME January 22, 2014 posted by

Charles’s Note: it isn’t agreed if the English spelling should be “Gyators”, “Giatrus” or “Gyatoruzu”. For the purpose of this article, I’m going to use the straight romaji of the Japanese name.

One of the most common settings in animation is stone age. For as long as we remember, we are fascinated by the lives of cavemen and their primitive ways, or at least the romanticized, fictional versions of their lives. The Fleischer Studios did a series of cartoons set in the stone age in 1940, Hanna-Barbera struck big when “The Flintstones” premiered in 1960, and one of the most popular comic strips to run in newspapers was “B.C.” by Johnny Hart. Even in today’s CGI era, “The Croods”, made by DreamWorks, was one of the highest grossing animated features from 2013. 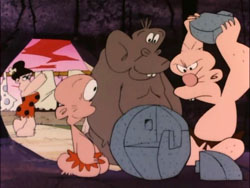 While the stone age setting wasn’t as used in Japan, there were, nonetheless, a few cartoons that takes place around it. Tatsunoko Production did a show called “Dokachin” in 1968-1969, about a primative boy and his family who got transported to modern-day Japan due to a time-machine malfunction. Around the same time, Shotaro Ishinomori drew a comic called “Genshi Shonen Ryuu” (Primitave Boy Ryu), which later got turned into a short-lived, unsuccessful anime by Toei Doga in 1971-1972. Both shows came and went and were promptly forgotten. However, there is one stone-age cartoon that became a pop-culture staple in Japan, called Gyatoruzu.

“Gyatoruzu” is a creation of Shunji Sonoyama (1935-1993), a cartoonist who drew “newspaper” style comics rather than the conventional “manga” style. He made his professional debut after graduating high school with a strip called “Ganbare Gonbe”, which debuted in 1958 in Mainichi Shogakusei Shimbun, a newspaper marketed to school kids.

“Gyatoruzu” debuted in Manga Sunday (no relation to Shonen Sunday) on June 2, 1965, running there until April 12, 1975. It was a comic aimed at adults that featured a group of cavemen and their lives around it, presenting gags from their situation, using primitive people to make comments on modern society. The idea that Sonoyama had was that the primitive people were more human, not having to deal with the industrial, mechanical life that the world was gone to. This strip is similar to Johnny Hart’s “B.C.” (which Gyatoruzu has been compared to) in that regard, and a strong contrast against “The Flintstones”, where the stone-age society deliberately mirrored contemporary society. 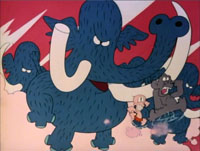 Unlike most cartoons that takes place in the primitive time, there are no dinosaurs, one of the few to take notice that humans and dinosaurs never co-existed. However, there are mammoths. The cavemen would hunt mammoths and eat them for dinner.

Even though “Gyatoruzu” originally didn’t have a core set of characters, the comics eventually formed one through its spin-off, “Hajime Ningen Gon” (lit. Gon the First Human, also called “Gon the Primative Boy”), which focused on a young primitive boy named Gon and his family. This spin-off comic came out in 1966, appearing in Gakken’s Gakushū Magazine, aimed at children. 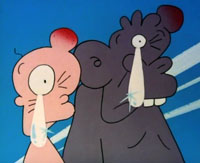 Gon is what you can imagine an average kid would be like if he lived in the stone age. He goes out and play and gets into trouble. His companion is a gorilla named Dotechin. Even though he only speaks in grunts, other characters have no trouble understanding him. Gon often helps his dad hunt for food. Mammoth is prominent in this show, and in many episodes the characters are seen eating a huge slice of mammoth meat for dinner, one of the signature trademarks in the show. The mom is a caretaker, taking care of their home/cave and her family. She’s always shown carrying Gon’s numerous baby siblings on her back (actually just holding them together with her tight dress). Interestingly, she always has one of her breasts exposed. It was considered OK to show mild nudity in cartoons aimed at kids, provided that it wasn’t heavily sexualized.

Other characters include Piko-chan, a cave girl whom Gon had a crush on. Two-thirds into the show’s run, Amanojaku became a recurring character. In the Japanese folklore, Amanojaku is a small demon creature who provokes people’s darkest desires, although in the show he is depicted as a small child with a horn on his head who likes to help animals. Indeed, in few episodes creatures from Japanese folklores made appearances, or at least the prehistoric versions of them. Tengu was a subject of one episode, and in another Gon encounters an ugly witch who turns people into stone whenever she gets insulted for her looks. 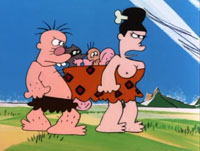 The reason for the anime’s existence can be described as pure luck. Yutaka Fujioka (1927-1996), the founder and president of the Tokyo Movie (TMS) company, lived next-door to Shunji Sonoyama. By 1974 the company’s hit series “Dokonjo Gaeru” (The Gutsy Frog) was ending its two-year run, which meant that TMS needed a new series to keep them (and A Production) busy. Since Fujioka knew Sonoyama and the manga was a hit, he signed him on for the anime, set to begin that year.

The anime, which was christened Hajime Ningen Gyatoruzu (“Gyatoruzu the First Human”), is one of the most distinctive animation productions to be made for television in the 1970s. The animation follows the Sonoyama style closely, which is a departure from most TMS productions of the era, which would redesign comic characters to suit the animation. Takao Kosai, the lead character designer for the “Gyatoruzu” anime, laid out this rule for the series (translated into English, taken from this post on the series by Ben Ettinger):

• Unlike the usual way of doing things, here we will not create designs for the animated version. We will use the drawings of the manga, as is.
• Therefore, please base your drawings on the poses and expressions in the manga.
• Things to keep in mind while animating:
1. Do not draw characters three-dimensionally
2. Do not draw clean lines or figures
3. Movement should be clunky in following with the look of the drawings.

For a 1970s anime of the era, it’s an interesting, and rather daring, challenge to animate this way, replicating the “naïve” cartoon school of art seen in the comic. Gyatoruzu is also an exercise in what kind of artistic freedom you can get away with in the television pipe-line. Unlike most TV anime of the era, there was no chief director supervising the entire series to make sure that every episode is consistent with each-other. For Gyatoruzu, there were only individual episode directors left to do their own thing without any creative supervisor looking over their shoulders.

The animators themselves seemed to have a blast drawing this show, too. If the directors being allowed to direct however they wanted wasn’t enough, the animators were given more leeway on how to animate these prehistoric characters. Kosai’s notes included this sentence: “How can you expect kids to enjoy animation if the animators didn’t enjoy drawing it?” It’s clear that they took this to heart, as the animation is a blast to watch. The animation is unpredictable. You don’t know how they’ll move or how they will be drawn. They also utilize written sound effects, which can actually interact with the characters (it’s even used in the opening title sequence, forming the show’s title card). Gyatoruzu is a rare example of anarchy in TV animation.

Of course, anarchy or not, it helps to have people with talent on the show. Thankfully, this show had many notable names working on it, with the likes of Yoshifumi Kondo, Osamu Dezaki, Masami Hata, Tsutomu Shibayama, and Osamu Kobayashi, plus many others. Normally in anime, there is a person called a “sakkan” (sakuga kantoku, which literally means “animation director”). Their job is to go through every key animation drawings and ensure that the characters are on-model, making corrections and, if necessary, re-animate scenes. Because of this, sakkans typically do main character model sheets as well. In Gyatoruzu, Takao Kosai is credited as a sakkan, but he apparently did not do any corrections at all on the drawings, meaning that the drawings on screen, barring clean-ups and in-betweens, are almost exactly how the animators drew it. Kosai’s screen credit may have been an honorary one, given because he set the rules for the visual style.

The show ran for 77 episodes. It began on ABC (Asahi Broadcasting Corporation) in October 5, 1974, airing on Saturdays at 7 PM. Only the first 26 episodes aired on ABC, until March 29, 1975, when the network switched to NET (Nihon Educational Television) for the remaining 51 episodes, exactly one week later on the same time-slot. The show remained on NET until it ended on March 27, 1976. (Note that, even after the network switch, ABC is still credited as a co-producer with TMS on every episode).

Above is episode 26. The first half is directed by Eiji Okabe and the second half is Shigetsugu Yoshida. The first half, which deals with Gon’s hatred of carrots, is a good example of the animation style. In the climax, when Gon finally eats his carrots, note how it was animated. It would have been easy enough to do a mundane, “eating” animation, but the animator channeled the character’s utter distaste for the food for its animation. 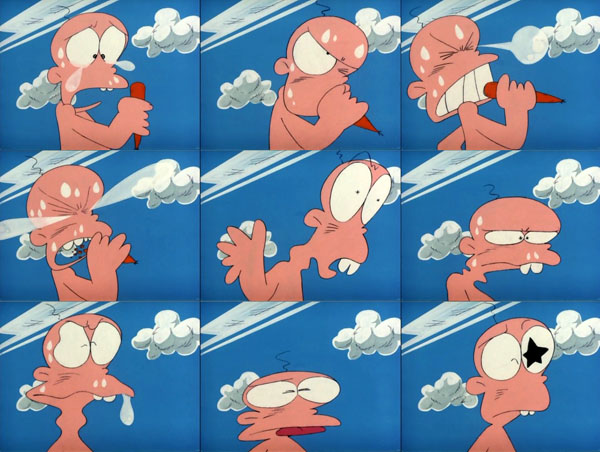 Remarkably, TMS tried to market the show to English-speaking countries, dubbing one of the episodes using Canadian voice actors. The English version was called “The First Family”, and for the pilot they re-wrote the show as a “gag dub”, with references to modern-day technology, implying that the show actually takes places in present time, with the family choosing to live in the wild. The English pilot was produced by Ocean Studios and featured voices by Matt Hill, Richard Newman, Teryl Rathery, and Terry Klassen.

A second series based on the comic was made three years after Sonoyama’s death, under the Hajime Ningen Gon banner, produced by Studio Pierrot. It aired on NHK’s BS 2 channel [BS = Broadcast Satellite], from April 3, 1996 to January 22, 1997 for 39 episodes. Unfortunately for the new show, the character designs, while similar to Sonoyama’s work, was polished up for animation, ironically breaking the above rule that Takao Kosai established in the earlier 1970s series. It’s fitting that the older series is better remembered than the 1990s remake.

It was also considerably toned down, since the second series was aimed at a much younger audience. Noticeably, the mother was more modest, compared to the 1970s series where one of her breasts was always exposed, and the gags were not as biting.

In a way, looking at the 1970s Gyatoruzu anime can get depressing because it does prove that it’s possible to have a fun, enjoyable TV cartoon that the artists can go wild on, rather than slavishly copying the model sheets to the letter. 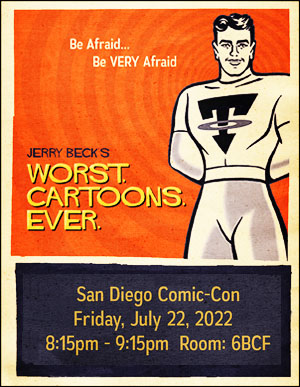