After the final closure of the IFS animation studios by J.R. Bray in the fall of 1921, Grim Natwick applied for a passport from the Washington State Department, requesting permission to travel though France, Germany and Austria to study art. On January 16th 1922, Grim’s Passport was issued, and he departed for Europe along with his wife Lucille. From about Feb 1922 to April 1924, Grim Natwick studied at the Vienna National Academy of the Arts under the famed impressionist painter Gustav Klimt and other noted instructors. He wound up expanding his areas of study to include stops in England, Holland and Belgium before returning to the United States from Switzerland.

During his first year back in the US, Grim immediately resumed freelance sheet music illustration work for several of his usual clients: Shapiro and Bernstein, Jerome H. Remick, and Pace and Handy. However, when Grim’s friend and former IFS colleague Bill Nolan secured license and distribution for a new series of Krazy Kat cartoons, Grim joined his staff at the makeshift studio Nolan established in his garage in Long Branch, New Jersey. The surviving films in this series show that Grim was turning out a great deal of the footage in most of the 1925-26 Krazy Kat cartoons. As a result of Grim’s heavy involvement with this series, it appears he did not do any freelancing for his usual sheet music clients in 1926.

In the turn of 1927, Bill Nolan lost the contract to make Krazy Kat cartoons to Ben Harrison and Manny Gould, who underbid him. Nolan closed his studio, and Grim returned to freelance illustration work. While the majority of the 13 known covers Grim produced in 1927 were for Jerome Remick, he also sold a few to Triangle and W.C. Handy. Grim’s work at this time shows a noticeable “loosening up” in comparison to his work from the late ’teens, a result of his schooling in Europe and his subsequent progress as a draftsman.

In 1929, Grim produced no known sheet covers but illustrated a book by Saturday Evening Post humorist Will Rogers titled Ether and Me: or “Just Relax” collecting some of his published writings. In the Spring of 1930, Grim joined Fleischer studios as an animator-director, where he soon achieved national recognition throughout the industry for his animation of his character, Betty Boop. In both sheet music illustration and animation, Natwick’s greatest strength proved to be his masterful ability to render powerful, charismatic females, eventually leading to his animation of the titular character in Walt Disney’s Snow White. 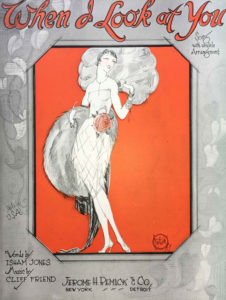 Charlie Judkins is an animator and animation historian based in Brooklyn, NY. He also works as a Ragtime Pianist, and is the protege of Ragtime legend Terry Waldo.

Other Posts By Charlie Judkins