‘George Washington in Clay’ gets Saved!

It’s late on Wednesday night as I write this; I stopped by the school on the way back from Toronto. I did a scanning session there for all sorts of things, including some more Rainbow Parades. I owe everyone a much longer post than this and will try this next week to be a little ahead of the curve! There’s much more to tell and show…. 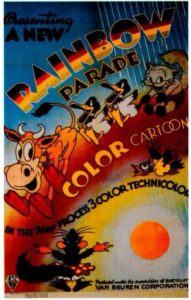 One of the Rainbow Parade films today was stunning to see in the raw scan in terms of the color and registration. Cinecolor’s consistency was clearly an issue in the 30s into the 40s; print quality (especially in registration) is all over the place— sometimes really good, much of the time not so much. It is important to note that most surviving prints of these films in 16mm are not in the greatest shape, but I’ve been lucky enough to borrow some that are better than anything I’ve ever seen. At least we’ll get the best of what we know exists, but the hunt is still on in getting the best 16mm prints, or combining versions for some of the titles.

More nitrate is on its way here on the Rainbows, along with the very last Flips to do from LA. This leaves a few stragglers that have shown up recently in 35mm. I have 16mm versions of those two cleaned up, but am happy we’re getting an upgrade.

We’re working to get the titles *almost* out the door out right now; my goal is to have the next four weeks produce final masters on four titles.

It’s been an incredibly busy period here, both in orders, managing freelancers doing cleanup and working on getting some new folks set up on digital cleanup work, with complete workstations. These are good growing pains in some ways in that with more hands more can happen. I’ll be working on a more complete update this week for next week’s post, along with some release news!

And.. today’s film— again. This is a brief overview of some of the challenges of these materials. Of course, most films don’t have this exact issue— but nearly all have some issues that require some sort of work. 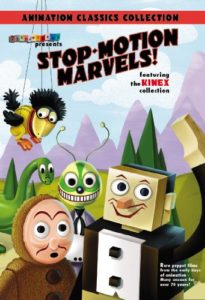 The coolest thing from today was being able to get a decent scan on George Washington in Clay. I did a short article last year about this film here, along with some scant information about Virginia May. Look in the comments below the article for some great information that J. Lewis uncovered about her.

I’m not sure if any other prints survive of George Washington in Clay, but back in 2007 or so when we scanned the print (from Chris Buchman’s archive) it was starting the warp and show signs on deterioration/ Vinegar Syndrome. When I opened the can a handful of weeks back I thought it was a complete gonner. After some soaking in Film-Guard and some other secret sauces, I managed to get it at least flexible, and was able to wipe most of the surface deterioration of the stock off (it has developed in a white, sticky powder on the surface). I had dealt with this before on other prints that are going from around this vintage— but was glad to be able to get it on the rewinds without it breaking or curling so bad that it wouldn’t scan. We had some difficulty getting a clean scan at first, so we eventually wond it backwards and upside down— and it scanned pretty good and in focus that way.

I thought it might be fun to show the scan raw as it was done. First, here’s what the print looked like on the first Stop Motion Marvels set (released in 2010):

And here is the raw scan from today, backwards and upside down! The coolest thing about the Laser Graphics Scanner is the ability to handle film that otherwise wouldn’t be able to get an image off. It’s sprocket less and gentle, but more importantly it can manage to register sprocket holes in really shrunken and messed up film. This scan was done in 2k, so we would be able to do a film print out since the scan is to the quality of the original print.

We’ll work digitally to clean this up and steady it. Let’s hope some other Virginia May shorts show up. She is an artist and animator that really should be documented further. I hope to add a few things to the forthcoming More Stop Motion Marvels Blu-ray.