“Free to Be … You and Me” Cartoons on Records

A look at the animation that resulted from the groundbreaking children’s record that became a book and then a TV special, each setting a creative foundation for generations.

Stories, Poems & Monologues: “Boy Meets Girl” by Carl Reiner, Peter Stone; “Don’t Dress Your Cat in an Apron,” “My Dog is a Plumber” by Dan Greenburg; “Housework” by Sheldon Harnick; “Ladies First” by Shel Silverstein, adapted by Mary Rodgers; “Dudley Pippin and the Principal,” “Dudley Pippin and the No-Friend” by Phil Ressner; “Atalanta” adapted from the folk tale by Betty Miles; “Grandma” by Carole Hart.

Songs: “Free to Be… You and Me” by Bruce Hart, Stephen Lawrence; “When We Grow Up” by Stephen Lawrence, Shelley Miller; “Parents Are People,” “It’s All Right to Cry,” “Glad to Have a Friends Like You” by Carol Hall; “Helping” by Shel Silverstein; “William’s Doll” by Mary Rodgers, Sheldon Harnick (based on the book by Charlotte Zolotow; “Girl Land” by Mary Rodgers, Bruce Hart. 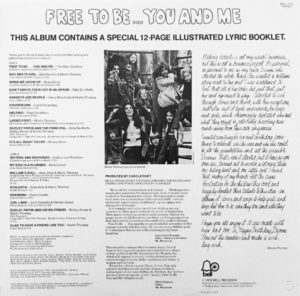 Stylistically, the 1974 ABC network prime-time special Free to Be… You and Me bore a striking resemblance to the TV-magazine format of Sesame Street and its growing number of inspirations, even the early ‘70s iteration of Captain Kangaroo. It was a collection of songs, stories and verses presented on film, tape or animation with special guest stars. Entertaining and eclectic, this format is used less frequently today, perhaps because all TV is essentially such a fast-paced mix, the programs themselves are more rapidly cut and viewers themselves can provide quick cuts with their remotes.

Sesame Street used this magazine format to teach numbers and letters; The Electric Company taught phonics and grammar; even adult series like The Great American Dream Machine used it for socio-economic themes like economics or political issues. Free to Be … You and Me presented an hour about who we are, want to be, want to feel good about being—but most importantly, the bond we can achieve by accepting and growing together with each other. It was an optimistic “like to teach the world to sing” philosophy. The degree to which is has taken hold is the subject of several books, including one filled with essays called When We Were Free to Be. 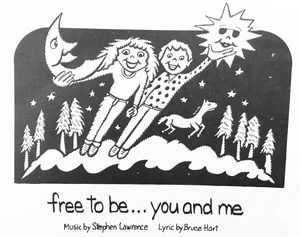 The fact that creative work so often dismissed as a “kiddie record” could even attempt to have a positive effect on the world is quite a thing to contemplate. Before it was a book or a TV show, it was a record album that former That Girl TV and stage star Marlo Thomas put together in 1971 with Sesame Street writer/producer Carol Hart and her husband, Bruce. The major labels refused it, despite such “A”-list names as Diana Ross, Alan Alda and Harry Belafonte—and even a Mel Brooks comedy sketch co-written by Carl Reiner! It was accepted by a smaller label called Bell Records, which had just been bought by Columbia Pictures in 1969 (and, believe it or not, began as an offshoot of Golden Records). Bell’s biggest stars were The Partridge Family, Tony Orlando & Dawn and The 5th Dimension (it later became Arista).

The 1972 album was a surprise hit and went Gold (eventually Platinum and Diamond). Thomas adapted it into a book, and 16 years ago this month, a TV special. The other labels lost out. 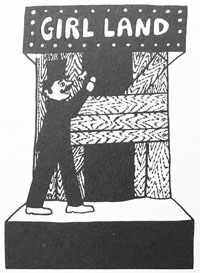 Perhaps because of a mutual Sesame Street connection, Carol Hall approached animator Fred Wolf about transforming tracks from the vinyl album into animated segments. At the time, Murikami-Wolf Productions was making very big waves, especially after producing the first animated TV movie, Harry Nilsson’s The Point for ABC in 1971. Hall recommended them to Marlo Thomas.

In an interview with me earlier this month, Fred Wolf recalled very simply that, “We met, we talked, we liked each other, which is important.” The album tracks were transcribed into script form so they could be storyboarded. Character designs, settings and gags were created that could not have been expressed in sound alone.

Almost all of the animation in the special comes from the album except the main titles, which were specially recorded. Also sung by The New Seekers, it has a fuller orchestration with an added calliope to match the visual of a carousel. As the calliope transitions into the theme, the live-action children and their horses become animated (shades of Poppins) and leave the carousel for the remainder of the sequence, which Wolf directed.

Some of the animated segments were light and comical, such as “Don’t Dress Your Cat in An Apron,” performed by the inimitable Billy DeWolfe (who millions will hear this month as Professor Hinkle in Rankin/Bass’ Frosty the Snowman. DeWolfe takes a gentle turn as a compassionate school official in “Dudley Pippin and The Principal.”

Wildly satirical—and therefore offering the most opportunity for animated gags—is Shel Silverstein’s “Ladies First,” a Roald Dahl-like tale of “be careful what you wish for.” Note the way the “Tender Sweet Young Thing” shakes her plate when demanding more mango, or how she is seen to trip the wire that traps the group—none of this existed without the animation, and it adds considerably to her character.

“William’s Doll” might be familiar to fans of the TV’s All in the Family because Gloria Bunker told an irritated Archie all about it. Somewhat controversial in its day, this album version is set to music by Mary Rodgers (author of Freaky Friday, daughter of Richard Rodgers) and Sheldon Harnick (lyricist of Fiddler on the Roof).

Among viewers, perhaps the most beloved memory of Free to Be … You and Me is the retelling of the tale of “Atalanta,” a heroine of inherent (rather than telegraphed) strength and good humor. Thomas and Alda, alternating between narrating and playing the characters, give an inspired performance, speaking together when the two are side by side in the race. It’s a fine audio device that works just as well in animation (chances are there are millions who saw this special who have no idea that the album came first).

At first, Fred Wolf and one other animator worked on the sequences. “But the majority of the animation I did myself,” he added. (Prime time network animation hand-drawn by one artist?) Wolf and his staff worked out of their California studio while Marlo Thomas flew out to supervise and approve pencil tests and final animation. “Marlo was a wonderful person to work with. We loved her and we felt the same back. It was a good experience for me.”

Rather than immediately follow up the success of Free to Be… You and Me with a sequel, Thomas spent the ensuing years reissuing the book, album and video through the Free to Be Foundation (which even licenses the material as a play for schools through the Rodgers and Hammerstein Organization). Sixteen years after the first album, Free to Be…a Family used the format to explore the changing perceptions of family life, also using an all-star cast for the TV special and the album. One of the most memorable segments is called “The Day Dad Made Toast” by Robin Williams.

Williams also participated in 2008’s Thanks for Giving All Year Long CD and book loosely inspired by Thanksgiving with proceeds benefitting St. Jude, the Research Hospital, founded by Danny Thomas that Marlo Thomas and her siblings continue to support.

Fred Wolf reflected briefly on how the acclaim of Free to Be… You and Me affected his studio. “It’s hard to tell about effects. It was certainly a great credit. If you’re doing top notch stuff, and you get another one right after it, you really don’t know if you got it because of that or whatever.” Wolf is no stranger to acclaim, impacting generation after generation with hits from The Point and Puff the Magic Dragon to Strawberry Shortcake and Teenage Mutant Ninja Turtles.

“I can guess people’s ages by what cartoons they tell me they loved as kids,” said Wolf, whose autobiography is coming soon. “It’s a lot when you consider that I started at Famous Studios in New York when I was 16. It was a summertime job. I did two summers in a row, working on Popeye and Little Lulu.”