A Look at the Music Behind Tim Burton’s “The Nightmare Before Christmas”
Aw, Whadda You Afraid Of?? (Part 1)
ANIMATION SPIN September 10, 2019 posted by Greg Ehrbar

Back to School with Jiminy Cricket and His Friends

For baby boomers of the ‘60s and ‘70s, Jiminy Cricket may have been a more consistent presence than Mickey Mouse or any other Disney Character. His innate, personable connection with audiences of any age, and the engaging voice of Cliff Edwards made him Disney’s go-to figure for imparting information. For many of us as kids, it was such a relief when the teacher would flip on the 16mm Bell & Howell—offering respite from lessons and classroom hierarchies—and to our elation, the movie was a reasonably good color cartoon, it was Disney, and it starred Jiminy Cricket! (One wonders how many people grew up with Jiminy yet never associated him with Pinocchio.)

Though a handful of Disney characters had been employed for instructional films for military and civilian service by the Walt Disney Studios, Jiminy Cricket came into prominence in 1955 as the professor emeritus with his Mickey Mouse Club appearances on such features as “You Are a Human Animal,” “The Nature of Things” and most famously, “I’m No Fool.”

For a detailed history and listing of these Mickey Mouse Club films—which involved such Disney luminaries as X Atencio and Floyd Norman—look no further than this article by our colleague Jim Korkis. 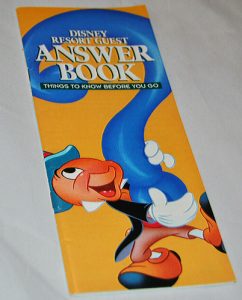 Beyond Jiminy’s Mickey Mouse Club show appearances (and show-related recordings which we explored here), Disneyland put him on their first Christmas release, a single version of “The Night Before Christmas.” He is also the only character to have co-hosted a record album with Walt Disney himself: A Day at Disneyland. Even this writer brought Jiminy into the picture as host of the original “Walt Disney World Answer Book,” a Q-and-A style guide to the parks, hotels and facilities of the massive Resort in Florida.

In 1963, two albums were released to teach math basics to children through entertaining, catchy songs. Jiminy Cricket’s character is definitely the “hook” of both albums, though he only sings one song completely on his own (“Noah’s Ark”). Most of the time, he might join in occasionally but mostly provides commentary on the lyrics and offers encouragement to the kids at home.

Records such as this were not new (a mail-order multi-disc set of Musical Multiplication Tables advertised by magazines for many years is just one example), but the approach was fresh and delightfully ‘60s (bossa nova, anyone?). Like Best Loved Fairy Tales, which took a jazz approach to the accompaniment (see this Spin), these two records are have a casual, laid-back approach that is never saccharine, patronizing or cloying.

The style is in keeping with all of the Disneyland Records by singer/actor/songwriter Rica Moore, who also narrated Mother Goose Rhymes and Their Stories in an unpretentious, natural tone.

Perhaps this lack of pretention was Moore’s way of counteracting her own opulent childhood. She grew up in great wealth—but lonely–with a huge mansion and as she put it, “hot and cold running servants.” Her mother wanted her to be a concert pianist, and while she loved music, practice and concerts were equally isolating. After graduating from the American Academy of Dramatic Arts in New York, she appeared in such films as Iron Glove (1954) with Robert Stack and All Ashore (1953) with Mickey Rooney, but a chance dinner with a Disney director about her real love of writing songs for children led to a meeting with Walt Disney and Tutti Camarata.

The third voice on the mathematics albums is Bill Kanady, a regular soloist and vocal group member on Disneyland Records in the ‘60s. Some of them are The Little Engine That Could; the “Rip Van Winkle” segment of The Legend of Sleepy Hollow; 20,000 Leagues Under the Sea; Songs from The Happiest Millionaire and the “lost” Snow White songs from The Seven Dwarfs and Their Diamond Mine (see this Spin).

GIVE A LITTLE LISTEN
“The Switch Hitch”

Moore does a nice duet with herself in this bouncy little swing tune as Jiminy speaks to the listeners.

“I’m No Fool” and a huge volume of other Disney and Mickey Mouse Club songs were written by the multi-talented Jimmie Dodd. Yet if his doctors had been correct, he would have been dead three years before he wrote “M-I-C-K-E-Y… M-O-U-S-E” and appeared on the show. Though stricken with an ongoing heart ailment, Dodd cheated expectations and lived almost a decade after the series premiered. Everyone connected with the classic series said he was exactly the kind, genuine person viewers saw on their screens.

Dodd’s career was not exactly firing on all cylinders before the MMC. He had been a struggling young Hollywood actor (look for him in a small role as a cab driver in Easter Parade, or as a singing cowboy sidekick in several Republic B-Westerns, though earning a slightly bigger role in Buck Privates Come Home), musician and songwriter. He had submitted “The Pencil Song” to the Walt Disney Studios for a proposed Disneyland TV show episode.

Walt Disney Music Company president Jimmy Johnson offered him a songwriting position, but as the Mickey Mouse Club was being prepared, the staff was so taken with Dodd’s engaging personality, they decided to audition him as an on-camera talent for the show.

In addition to being one of the grownup Mouseketeers on the Mickey Mouse Club, Dodd also was the voice of Bucky Beaver of the Ipana Toothpaste commercials (which Disney artists quietly created at the studio). Korkis wrote more about this fascinating little corner of history here. He also played several roles on the record albums dramatizing stories from Disney’s Davy Crockett and Zorro shows.

For Zorro, Dodd wrote the song “Lonely Guitar” for Annette. Her single version hit number 50 on the charts in 1959. Dodd recorded his own interpretation for Imperial Records on his only album aimed specifically at grownup listeners, a collection of well-known and original blues and light jazz songs. It’s also his only stereophonic recording:

The Swing-A-Spell album is also rendered in a light jazz style with a boys’ choir that sounds as if it could be the renowned Bob Mitchell Choir (The Bishop’s Wife, Peter Pan, Going My Way, The Flying Nun). All of the songs are educational in some way, mostly related to spelling. “Do-Re-Mi,” which is of course, is from The Sound of Music, which was a brand-new Broadway show when this album was released about singing. This is Dodd’s only recording of a Rodgers and Hammerstein song.

Jimmie Dodd should be honored alongside television greats like Fred Rogers, Shari Lewis and Bob Keeshan, who created warm, positive connections with young viewers. With no trace of guile, Dodd spoke directly and sincerely on a daily basis to millions of impressionable minds about caring for others, wisdom, appreciation and other “words to grow by.” No artificial ingredients added.

This is Jimmie Dodd’s version of the tune, written for Jiminy Cricket, that taught millions to spell the very long word, first on TV, then in school films, and so on…