The Seven Dwarfs on Records

Dopey and Sneezy starred on their own RCA records – and all seven headlined on an original Disneyland LP with two “lost” songs.

Undoubtedly part of the fresh merchandising and promotional plan for the 1952 theatrical re-release of Snow White and the Seven Dwarfs, these two single-disc RCA records came a few years after Dennis Day narrated the Snow White story on a multi-disc and book set for RCA, as well as his recordings of Disney’s Johnny Appleseed for the label.

A versatile performer—for which he is severely underappreciated—Day was a very popular young star when these records were made. In addition to continuing his classic role as the Gracie Allen-like, non-sequitur-spouting boy singer on radio’s top rated Jack Benny Program, he had also starred in a “spinoff” sitcom, “A Day in the Life of Dennis Day” which incidentally co-starred Dink Trout, who was heard in Disney’s Alice in Wonderland… as the king. (“whoopee!”)
Day’s affinity for dialects and voice variations served him well in Johnny Appleseed (he played all the roles), and he does the same in the two Seven Dwarf records. But perhaps he had not seen the movie anytime recently before entering the recording booth, as his Happy is kind of maniacal and his Sneezy isn’t anything like Billy Gilbert (in fairness, Day may have decided to avoid copying the voices of fellow actors).

And… Dennis Day’s Dopey talks. And sings. It would have been just as entertaining for the script to indicate Dopey’s actions through sound effects and the dialogue descriptions of other characters, but maybe RCA thought a record starring Dopey had to have a talking Dopey or people would complain. Actually, it is more likely to have the opposite effect on fans.

If the stories on these records did not come from comic books, they very well could have, since they have the same kind of serial feel. Both feature wildly convoluted evil plans given to the Evil Queen (June Foray) by the Magic Mirror (chewed deliciously by Hans Conried).

Sneezy’s sneeze stops because of enchanted rice in a pepper shaker that is stolen… oh, whatever—the cool thing is that the Prince (still without a name) actually does something for a few moments in this story. Even more interesting is Dopey’s story, in which the Queen pretends to have turned nice and repentant and gives him Jingle Berries (how does the Magic Mirror keep coming up with these wacky stunts?).

Dopey causes Snow White and himself to be captured, because he believes the Queen has reformed. Before we judge him too harshly, imagine if the Evil Queen had a tearful interview with Oprah. First of all, she’d emerge from hair and makeup looking sensational, every bit the almost-fairest one of all. Then, after some small talk (“How was your summer?”), the tears would flow as the Queen—claiming to be understood not so much as “evil,” but as a person who “has a darkness”—expressing her deep “regret” if she, as a “strong person” who sometimes lets her “passion” get the better of her, somehow let her enthusiastic “vision” for achievement inadvertently “hurt anyone.” Lauded for her courage to be so strong and “honest,” she then mentions her #1 bestselling autobiography (actually penned by the mirror) and her line of gourmet apples, now available on her website and Whole Foods. Who are we calling “Dopey?”

GIVE A LITTLE LISTEN
“Sneezy and Dopey Excerpts”
These little snippets were selected so you could hear Day’s introduction; a Foray/Conried scene; Day’s plug for the other record in the series; Snow White using her “business” voice in the dungeon and a few notes of Dopey belting out his ditty.

Like the RCA records, Disneyland Records’ The Seven Dwarfs and Their Diamond Mine was released in plenty of time to tie into a theatrical re-release of Snow White and the Seven Dwarfs, this time for the 30th anniversary in 1967.

In some ways, the newer album improves on the earlier records by staying a little more true to the characters (Dopey does not talk, Sneezy is a Billy Gilbert type voice) and has a little more intriguing story line. In this “universe,” the Evil Queen is gone, maybe “re-purposed” to a position that is “a better fit.” The Dwarfs have not seen Snow White in two years and life has pretty much gone back to normal.

Then strange noises and mysterious notes start occurring, causing some discomfort and even a little fear among the Dwarfs. It becomes like a scavenger hunt, and while a little padded, the story leads to a grand ball thrown just for the Dwarfs by their friend Snow White.

Stopping to make logical sense of the story is sure to boggle the mind. Snow White had a construction crew tear through the mines just to build a ballroom? Was it up to code? And how could such a nice Princess allow the Dwarfs to be “Punk’d?” Seems a little out of character for her to scare them like that—especially after waiting two years to see them and instead send personal assistants to deliver gifts. But then, do we really know what Snow White is like when she isn’t marked for death by a narcissistic psychopath? 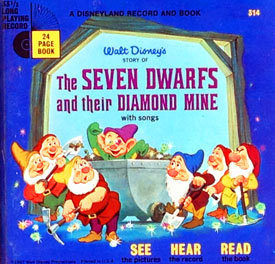 The 1966 recording, bearing the brunt of higher costs and tighter budgets, has a far less lavish production quality than the 1952 ones. Back then, children’s records were charting on the playlists. By the mid-60s, every children’s label was cutting back on all but a few titles. This album, though nicely presented, has very little music except the two songs, which are played by a tiny combo. Small bits of music from the Snow White sound track, as well as Camarata’s own Snow White album, make short appearances.

What it does have going for it is an ingratiating narration by Robie Lester, now a fixture at Disneyland Records as the “Story Reader” on the Read-Along sets. She reads the book version in a very different way than she narrates the album. Because she is leading children through the pages, she has a more methodical, even halting style (this varied on her read-alongs). On the LP, Lester plays a maternal role, doing the voices not so much as an actor than as a grownup trying to get smiles out of little kids before their eyes close for sleep.

When The Seven Dwarfs and Their Diamond Mine record was released, there was no idea at all that there would be a Seven Dwarfs Mine Train attraction at Walt Disney World (though the Snow White’s Adventures attractions includes a romp through the mine as well). What the record and the new attraction have in common are the two “lost” songs: “You’re Never Too Old to Be Young” and “Music in Your Soup.” Both are part of a Snow White song medley heard on the queue line leading to the attraction. In the film, “Soup” was to come after “The Washing Song” and “Never Too Old” was to be in the party scene. On the record, “Never Too Old” is part of a different party and “Soup” has a completely different context: apparently the Dwarfs now eat it for breakfast!

“A Soupçon of the Soup Song”

Heard near the start of the album, Robie Lester sets up the re-purposed context of “Music in Your Soup.” It’s sung by Thurl Ravenscroft (Tony the Tiger/ Mean One, Mr. Grinch/Grim Grinning Ghosts) Ravenscroft, Bill Lee (The Sound of Music/South Pacific/Hey There, It’s Yogi Bear!) and Bill Kanady, a highly sought-after Chicago and Hollywood studio vocalist, choral singer and member of The Jack Halloran Singers.