The first lady of animation is celebrated with two unusual children’s recordings, made generations apart, both as ageless as the talent of June Foray herself. 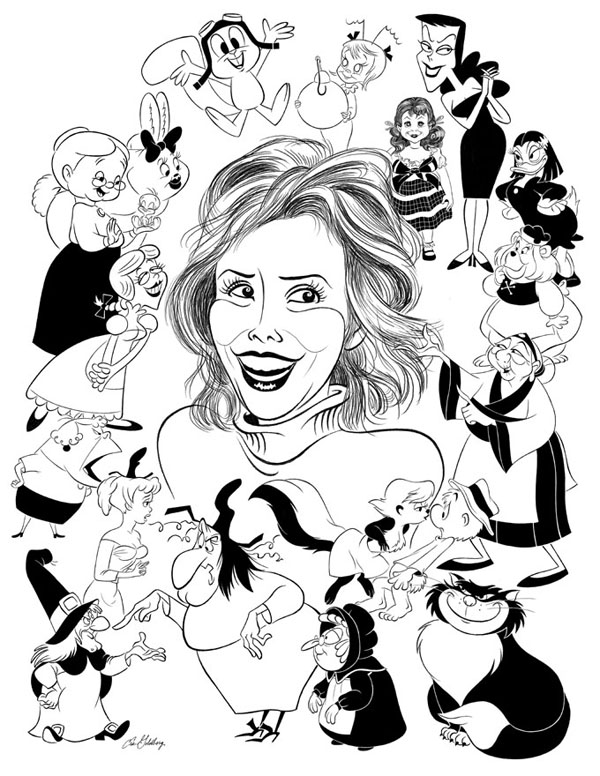 June Foray would be 101 today. We said goodbye to her last year (Eric Goldberg created the above art for her remembrance celebration program cover). She’ll never leave us in spirit or voice, of course.

June Foray was one of the stock players for the Capitol Children’s Series at the same time she worked with Stan Freberg on his records, often with the same creative team—Daws Butler and the music of Billy May—and probably the same musicians in bookended sessions. It was a golden time for all of these records.

The Capitol children’s discs are largely remembered for their licensed character titles, like Looney Tunes/Merrie Melodies, Woody Woodpecker and Disney. Capitol also gave the world Bozo the Clown, who was a Capitol Records character before being sold into Larry Harmon’s TV franchise machine.

Lesser known, but also significant, are the “Sparky” records. Sparky’s records became very successful before he appeared in animation (he did occasionally appear in comic books with Bozo).

June Foray is heard on Sparky’s first album, Sparky and the Talking Train (1947). Narrator Marvin Miller (Sleeping Beauty, The Pink Panther Show) introduces Sparky as a youngster taunted by his schoolmates–one of which is played by June–because they can’t hear the trains talking as he can. Eventually Sparky’s strange ability helps him save a train from crashing. Then all the reindeer love him. Marvin Miller tells us, “Even the other children now liked Sparky because he was so famous.” Timely, huh?

The original Sparky was Henry Blair, the radio voice of Ricky Nelson for the first four seasons of The Adventures of Ozzieand Harriet (David was played by Joel Davis and then Tommy Bernard). In the fifth season, the real-life Ricky and David began to portray themselves, at their own insistence. 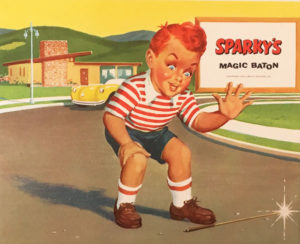 The second album, Sparky’s Magic Piano (1948) is the most famous of the series, especially in the UK. It became a beloved tradition on Ed “Stewpot” Stewart’s BBC Radio Junior Choice program for decades.

This one is a Twilight Zone-like story in which Sparky complains about his piano lessons—predating Dr. Seuss’ The 5,000 Fingers of Dr. T by five years. His piano begins to speak, saying it will play for him. Sparky becomes a big success until the piano decides to stop and Sparky is humiliated in front of a huge concert audience. Awakened from this nightmare, Sparky learns he has to practice.

This album was so successful, Livingston reused the storyline on other albums, including another with Blair called Rusty in Orchestraville (1949). June Foray and Mel Blanc can be heard on 1956’s Jack Benny Fiddles with the Classics (a.k.a. Jack Benny Plays the Bee), in which the comic violinist tells the “magic instrument” story as if it happened to him as a child:

Success turns Sparky into a spoiled brat in the animated feature version, which may have been intended as a TV special in 1982, but was released direct-to-video in 1987. The original Capitol Records producer, Alan Livingston, co-produced this adaptation, which was directed by Lee Mishkin of DePatie-Freleng, UPA, TTV and H-B. It’s narrated by William Schallert with the voices of Mel Blanc, Vincent Price, Tony Curtis, Cloris Leachman and even Livingston’s wife, Oscar-nominee Nancy Olson (Sunset Boulevard, Pollyanna).

The plot of Sparky’s Magic Piano is astonishingly similar to that of a season five episode of I Dream of Jeannie, “Jeannie at the Piano.”

June Foray finally became Sparky in 1954, with the “Record Reader” album Sparky’s Magic Baton,” with her old friend Daws Butler as the conductor. The Record Reader format had no text, just lush illustrations that the listener looked at as the record played. This is a comparatively pleasant romp for Sparky, without the angst of nasty peers or taunting audiences.

There was other female who played Sparky, singer Lee LeDoux, for the shorter and more lyrical Sparky’s Magic Echo (1952). It was produced by Mel-O-Toons, a small maker of educational films which often adapted audio recordings for their very limited animation. In 1960, they released it as Sparky’s Magic Voice.

The Sonovox electronic transmission device, by the way, was used for all these records, as well as for Casey Jr. in Walt Disney’s Dumbo. It was demonstrated by actor Frances Gifford for Robert Benchley in The Reluctant Dragon. Bandleader Kay Kyser starred in a very strange short that featuring the Sonovox.

When June Foray was not acting, crusading for other actors, campaigning in political activities, changing the course of show business or otherwise making the world better for having lived in it, she wrote.

Tall and Small Tales was something she created to showcase the range of her voice acting talents, as well as her sense of whimsy and warmth. So much of her work was for children, it stands to reason that more of us—and we’re all the kids who loved and love her—should know these unpretentious tales that set out simply to entertain.

GIVE A LITTLE LISTEN
“June Foray’s Tall and Small Tales”

As a special treat for June’s birthday, here are her charming original stories, told with her inimitable voices.
Here are all five.