The two-film “cartoon modern” series, sporting projection innovations of their day, were united on one Disneyland album as well as scattered among various individual releases. 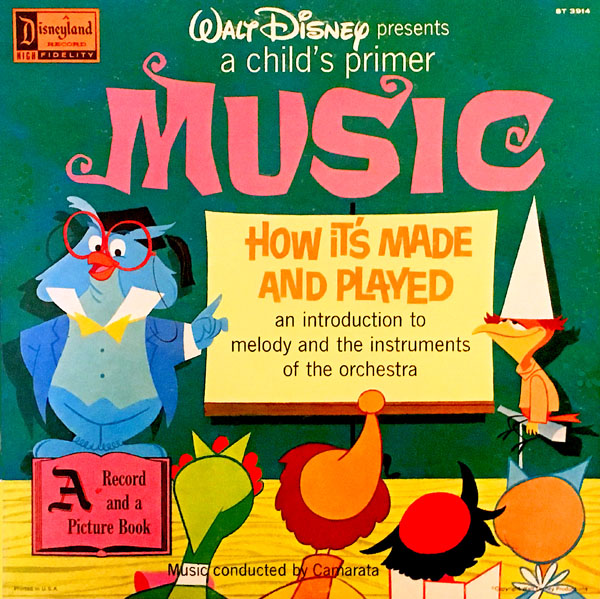 Walt Disney Presents A Child’s Primer
MUSIC: HOW IT’S MADE AND PLAYED
An Introduction to Melody and the Instruments of The Orchestra
Disneyland Records – Storyteller Series ST-3914 (12” 33 1/3 RPM LP with Book / 1961)

Original Songs: “The Bird and The Cricket and the Willow Tree,” “Lemon Drop Moon,” “Motherhood,” “The Old Iron Horse” by Paul Francis Webster, Sonny Burke; “Toot, Whistle, Plunk and Boom” by Jack Elliott, Sonny Burke.
Traditional Songs: “ABC,” “Sailing, Sailing,” “A Life on the Ocean Wave,” “Bury Me Not on the Lone Prairie.”

One thing cannot be denied about the two films in Disney’s short lived Adventures in Music series. They still look fantastic. At the time, they were a major stylistic departure from the classic studio style. Reportedly Ward Kimball convinced a dubious Walt and it resulted in Toot Whistle snagging an Oscar, while Melody earned a nomination. Whether the music series could have been sustained is questionable, since Professor Owl was no Ludwig Von Drake, and the subject of music was fairly well covered by the two films.

Every animation studio was “inspired” by the startling modern art style that had catapulted UPA into the forefront of animation during the postwar era. Many were also experimenting with using wide screen processes like 3-D, as Melody did, and Cinemascope, as did Toot. Even though the market for shorts was dwindling, it was an exciting time for a familiar form.

Taking on the modern style seemed to be a rare case in which Disney product was riding the crest of a wave instead of initiating it. But aside from visual similarities, there is no mistaking either Adventures in Music cartoon for anything but Disney—and the music plays no small part in that distinction.

Melody (released on May 28th, 1953) was created for 3-D – most obviously used in the finale 2-minute musical montage that brings together all the melodic elements discussed in the film – but fortunately the film was not tied entirely to the gimmick. It’s more of a “book” musical than Toot, which has just a title song. Melody’s voice cast includes top Hollywood studio vocalist Gloria Wood (who also voiced Chip ‘n Dale and Lantz’s Oswald). We talked about Ms. Wood and her sparkling jewel of an album, A Christmas Adventure in Disneyland, right here. (Melody was later compiled into the 3-D Jamboree film shown in the Fantasyland Theater, at Disneyland Park, where the original Mouseketeers in color and 3D also appeared).

Melody plays like an animated medley rather than telling a story. The first half traces a lifetime through songs and the second half gives examples of the inspiration for various melodies. The catchy signature song, “The Bird and the Cricket and the Willow Tree,” is one of those Disney tunes–tucked quietly away as it is in this now low-profile short–that merits more appreciation.

The “song after song” narrative framework of Melody is another antecedent of sorts for a theme park attraction—Marc Davis’ “America Sings” at Disneyland, which was also a journey through melodies, in its case early 20th century popular songs.

The second Adventures in Music short celebrates its 65th anniversary this Saturday. The landmark Toot, Whistle, Plunk and Boom (released November 10th 1953) traces the history of musical instruments from ancient days—suggesting future formats of Epcot attractions like Spaceship Earth and World of Motion (which was supervised by Kimball). All of them owe a nod to the “It’s Whatcha Do with Whatcha Got” sequence in 1948’s So Dear to My Heart, which also featuring a wise old owl.

Melody never gets much of a nod for its modern style, being a little less daring except in its attempt to make use of perspective. depth and design patterns to accentuate the 3-D effects. The irreverent and gag-laden Toot, Whistle, Plunk and Boom reflected Kimball’s often mocking yet instructive approach. It would serve Kimball well when he directed his space episodes for the Disneyland TV series.

In Tutti Camarata’s vinyl version of both films, Bill Lee takes over Bill Thompson’s role of Bertie Birdbrain. Thompson had never made a recording specifically for the Disneyland label, though his work on soundtracks did appear. Bertie is essentially a non-singing role, but the versatile Mr. Lee of course could be heard throughout the album performing other duties, including the role of “Man” and singing in the ensemble.

This album, released in 1961 under the unwieldy title A Child’s Primer – Music – How It’s Made and Played with an album-sized book filled with film stills. This version didn’t sell for very long. The following year, it was reissued without the book and retitled A Child’s Introduction to Melody with the subtitle …And the Instruments of the Orchestra. The second edition sold consistently for over twenty years, perhaps because sold for two dollars less than the first one.

Gloria Wood reprises her film role on this album, but playing Professor Owl is Thurl Ravenscroft, doing a fine job with a very different timbre than Bill Thompson. 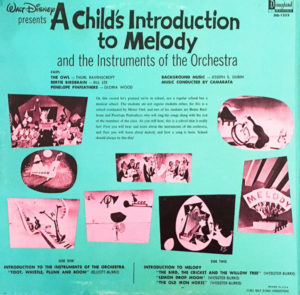 The 1962 cover lacks the cartoonish charm of the 1961 edition, instead going for an educational look. In 1963, the back cover was designed to includes still from not only Toot, Whistle, Plunk and Boom and Melody, but also the “After You’ve Gone” sequence from 1946’s Make Mine Music.

Based on the new title and the front cover “instrument” design, one wonders if there was an effort to emulate Golden Records’ venerable series of “Child’s Introduction” record albums, especially the very first Golden LP, A Child’s Introduction to the Orchestra, a longtime bestseller composed by Alec Wilder (that even impressed Frank Sinatra enough to conduct a selection from its score on one of his albums). Whatever the reasoning, A Child’s Introduction to Melody was a ubiquitous presence in children’s record racks until vinyl records vanished.

This was one of the last big-budget Disneyland Records of the early days, following both of the shorts faithfully with a few exceptions. The cavemen do not chant “Ooh-wah-gah-wah” as they do in the film and the marching band (near the finale) does not play off key as it did in the film. With the absence of picture, the joke of the band playing off-key makes no sense. Presumably made to heighten the album listening experience. 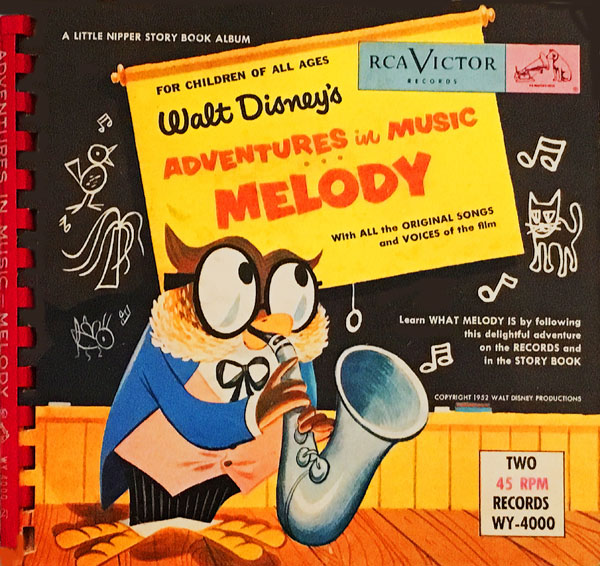 RCA has made it possible to have what amounts to an entire extended Disney short brought to records with no expense spared. Very few records were actually composed, arranged and conducted by Disney music staffer Joseph S. Dubin, even though he worked on numerous features and shorts. Thus, this album set (which was never released on LP) has an authentic “Disney” sound of the era that few others can match.

Dubin was able to open up the score and allow a few more bars of several melodies to continue beyond their film presentation, so this is more than a studio retread or a soundtrack pickup. The public domain tunes that were replaced on the Camarata album with “Old MacDonald Had a Band” are all included on the RCA version for a slightly longer duration, even though the overall playing time is just sixteen minutes.

For the record, though the cover states the record presents original voices, only Gloria Wood and Bill Thompson are from the principal cast. RCA cast members John Brown and Leone Ledoux were often featured on Little Nipper recordings produced by Steven Carlin. Many of the singers, since they are directed by Jud Conlon, are likely to have been the same as those on the film soundtrack.

In addition to the two albums above, two excellent Little Golden Records based on the Adventures in Music shorts were also released. One follows the storyline of Melody, presenting variations on “The Bird and the Cricket and the Willow Tree.”

Golden’s “Toot, Whistle, Plunk and Boom” is particularly interesting because it offers the melody of the song in its purest form. In the original film and on the Camarata album, the song is spoken in parts and sung in others, so it’s never heard completely as written. It’s a bit of a revelation to hear Anne Lloyd and the Sandpipers sing it all the way through. That is followed by nice instrumental variations on side two.