So I get a lot of spam from Amazon.com trying to sell me books and DVDs similar to those that I’ve bought before. Usually I don’t pay much attention to them, but recently I got one saying that “If I like DVDs of animated features, I might like these…”

And there were three direct-to-video “movies” that were among the most blatant imitations that I’ve ever seen: Chop Kick Panda, a ripoff of DreamWorks Animation’s Kung Fu Panda; Tappy Toes, a ripoff of Warner Bros.’ Happy Feet (produced by Animal Logic); and Puss in Boots: A Furry Tail, a ripoff of you-know what. I put “movies” in quotation marks because these direct-to-DVD releases are technically full movies going by the accepted definition of a feature as 40 minutes or longer, although these barely qualify, at 41 to 45 minutes.

These could not help reminding me of another feature covered on all the animation websites; the Chinese Legend of a Rabbit (Tu Xia Chuan Qi). This was not just an animated feature made in China. It was made by the Beijing Film Academy and Tianjin Film Studio – in other words, the state government. And it was an embarrassing ripoff of DreamWorks Animation’s Kung Fu Panda!

It’s also well-known that from Cars in 2006 to Up in 2009, Pixar could hardly make an animated feature without a ripoff feature appearing as a direct-to-video movie almost simultaneously.

I wrote a column back in April 2013 about animated features that (almost) no one ever heard of, that are direct-to-video kiddie DVDs. But those were all foreign original animation features that had tried and failed to get theatrical distribution in America before settling for the kiddie-DVD releases. The ripoffs are, with the exception of Legend of a Rabbit which was made primarily for a Chinese theatrical audience, DVD originals deliberately made as imitations of popular American theatrical features. They seemed worth a separate column.

Somebody else thought so, too. As I was compiling this for my columns, another website back in January published an “Ultimate Guide” with 38 examples of what it called “mock busters”, the portmanteau used to describe a genre of home video that is dedicated to tricking customers into mistakenly purchasing a low-budget imitation of a popular movie.” But this included both the examples that I had found, plus the original foreign films repackaged to look like imitations of popular theatrical features. Despite that writer defining ‘mockbusters’ as including “deceptively repackaging an existing animated film with a trendy new cover and title”, his examples seemed to imply that these are all original animated features deliberately made as imitations of popular American theatrical features. This seems misleading to me, and unfair to original foreign productions that only some U.S. or British distributor has later repackaged to look like a well-known American feature. This column will concentrate on the deliberate imitations, and I will focus next week on more foreign original animated features repackaged to look like ripoffs of an American animated movie.

The producers of the most blatant ripoffs are notorious for being that. Tiny Robots (Robots), The Little Panda Fighter (Kung Fu Panda), Little Bee (Bee Movie), Ratatoing (Ratatouille), What’s Up: Balloon To The Rescue! (Up), The Little Cars (Cars), and others have been made by Video Brinquedo in São Paulo, Brazil. This is a plot point in Ratatoing; it is set in Rio de Janeiro, Brazil instead of in Paris, France. Video Brinquedo has made other DVD movies that have not been released in the U.S. yet, such as Gladiformers (Transformers; “Robos Gladiadores”), and Little & Big Monsters (Monsters and Aliens). 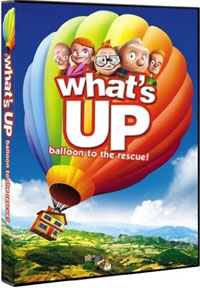 The other most notorious producer of ripoff DVD animation is Spark Plug Entertainment in New York. Spark Plug is responsible for An Ant’s Life (A Bug’s Life), A Car’s Life (Cars), Plan Bee (Bee Movie), and Spider’s Web: A Pig’s Tale (Charlotte’s Web). The Cars imitations of both Video Brinquedo and Spark Plug Entertainment have proven to be especially popular, particularly with 2- and 3-year-old children who are too young to recognize ripoffs and just like anthropomorphized automobiles. There are three A Car’s Life movies from Spark Plug, and eight The Little Cars movies from Video Brinquedo plus a live stage musical adaptation of the first in Brazil.

UAV Corporation, or UAV Entertainment, in Charlotte, North Carolina, did not make many productions but it made some of the most bizarre. UAV’s original productions included The Secret of the Hunchback (The Hunchback of Notre Dame), The Secret of Anastasia (Anastasia), Young Pocahontas (Pocahontas), The Secret of Mulan (Mulan), and Moses: Egypt’s Great Prince (The Prince of Egypt). UAV has tried to make its films a combined ripoff of two popular features, where possible. The Secret of Anastasia was both Don Bluth’s Anastasia and Disney’s Beauty and the Beast: the whole Romanov royal family is transformed into talking musical instruments. (For some reason, UAV made Nicholas II look like a generic fairy-tale king instead of the real often-photographed last tsar of Russia. Was UAV afraid of The Secret of Anastasia looking too much like Bluth’s movie?).

The Secret of Mulan (embed below) was both Disney’s Mulan and Pixar’s A Bug’s Life; the characters are mostly insects. The Huns are ferocious beetles, and the Chinese are butterflies, caterpillars, dragonflies, and small furry animals like mice and rabbits. Mulan is a caterpillar commoner who becomes a beautiful butterfly.

Prevalent Entertainment, Inc. is a new Southern California studio formed by veterans of DreamWorks Animation, Walt Disney Studios, Sony Pictures Entertainment, and the Cartoon Network. You sure couldn’t guess that from the quality of its two features so far. The Prodigy is a 2009 feature about a Chinese kung fu champion – human, but she has a “brave yet zany” panda tutor who is emphasized on the DVD cover (the weblink is to PEI’s Prodigy website; click on the Trailer menu option), and the 2012 Life’s a Jungle: Africa’s Most Wanted, about a pampered American puppy lost in the African jungle – a medly ripoff of all three of DreamWorks’ Madagascar features.

The companies mentioned above are the production studios, although UAV Entertainment is the distribution arm of UAV Corporation. The other direct-to-video DVDs are almost all distributed by Allumination, Arc Entertainment, Gaiam, Morningstar Entertainment, Peter Pan, Phase 4 Films, and other specialty labels of the children’s DVD market. In some cases, such as British Brightspark Productions Ltd.’s January 2011 Tangled Up, a DVD ripoff of Disney’s Tangled (November 2010), it is almost impossible to find out the difference between the producer and the distributor, if any. It may be animation, but judging by these trailers, most of it is probably animation that you don’t want to see.

It turns out that the story is more complicated than it seems. There are the movies like Ratatoing, released June 2007, that are blatant imitations of American originals; in this case, of Pixar’s Ratatouille, also released during the same month. The timing may seem too short for an imitation to be made, but the American features have all been publicized in trailers weeks and months ahead. It would not be difficult for an imitator to find out an expected blockbuster’s basic plot months before its release, and rush out a hasty and cheap imitation.

Here’s a sampler of other “Mockbusters” derived from popular Disney, Dreamworks, Blue Sky and Bluth animated features – even one that knocks-off Charlottes Web!

Life’s a Jungle: Africa’s Most Wanted

The Secret of Anastasia part 1

NEXT WEEK: Animated Knock-Offs #2: Not Quite ‘Mockbusters’!