The Future of ‘Classic’ Animation Scanning and Restoration

There’s no cartoon this week; instead, a sort-of ‘part 1’ update on various projects, all of them
“On the Thunderbean Front”:

These have been some of the busiest weeks of the year here so far, with no sign of being any less busy. I really can’t complain, because I’m really enjoying seeing things come together, although still slower than I always hope.

Naughty But Mice from the “Noveltoons” set

Grotesqueries is almost ready to master, and I hope to get it there in the coming week or so before heading off to Ottawa for the animation festival. Several of the ‘special’ sets are getting dubbed and heading out. More films are coming back cleaned up every day for Noveltoons, Flip, Rainbow Parades and other projects.

I’m happy to be doing final adjustments on many of the Flip The Frog’s at this point. It’s been a long journey. There are several films from late in the series that have recently showed up in 35mm that we only had in 16mm before. It will be several more months before those are able to be scanned, so we’re debating releasing the first disc of the set first, just to get those in everyone’s hands.

A major computer crash slowed progress last week but didn’t prevent things from moving forward. Despite various hurdles, a parade to the post office daily keeps my helpers busy here. After some field issues with the Mid Century Modern Bonus disc, those sets are on their way. The Party Disc is finally going out to the pre-orders as well. We’ve been working on the bonus features for the first disc of Flip, and working on several friend’s projects these last few weeks. Seeing everything coming in and out is a little dizzying at this point, but I’m happy that the major work is getting done on so many sets at the same time.

The final edits for many of the Rainbow Parades are finished, including The Sunshine Makers, Pastrytown Wedding, Bird Scouts, A Picnic Panic, Scott Finds a Home, Parrotville Post Office and Parrotville Fire Department with the rest of the Cinecolor titles in the pipeline. I’m very happy about how the set is coming along and looking forward to getting the second half of the series finished as well.

I’ll work on having a complete list of progress on all the projects for next week.

Being able to do these projects and others, as well others that haven’t been able to move forward, gives a great insight on how the current situation stands in terms of future projects. There are so many more sets we want to do in the world of classic animation, and in the bigger picture, many, many more things that could be done if the films and materials were accessible. 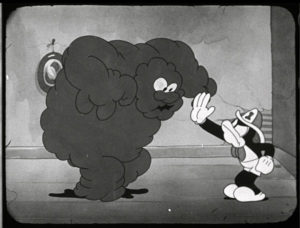 We officially have more things in progress than we ever have at this point, and still, many others are still on the radar but just haven’t gotten enough gas as of yet. On one hand I’m ok with that since the plate is pretty full, but on the other hand I’d love to have other things getting started just so they can be on their way to being cleaned up and seen. There are many, many more things in progress than I can talk about just yet, but I do think the next batch of Thunderbean sets will be both of interest and exciting. One of the projects started in 2011, so clearly we’ve been in for the long haul on that one!

It’s nice to see Warner Archive still taking an active interest in classic animation; my great hope is that their sets will continue until even more of the classic films they hold are released. Columbia’s shorts are of course among my favorites, and I always hope that sooner than later their animated shorts will see some kind of Blu-ray release. The large companies that own large libraries continue to look for outlets to generate income from these properties, but I’ve found that it takes a true labor of love, often internal at a company, to really make sure any of those projects happen.

The Bunin ‘Alice’ project is working on taking some steps forward right now, happily. We’ve had a majority of the material finished on the set for years, waiting for the feature material to become available. It is now, and things are moving forward. Details soon.