Barker Bill’s Cartoon Show is considered one of the first network television weekday cartoon series. It aired on CBS from 1953 to 1955 – before Paul Terry sold his studio and film library in its entirety to the network.

According to Wikipedia, Barker Bill was a 15-minute show, broadcast twice a week, on Wednesdays and Fridays at 5pm Eastern (although some local stations showed both episodes together as a single 30 minute show). Here is the original musical opening of the show, which would lead right into some delightfully creaky 30s Terrytoon.

Unlike the other animation studios, who tread cautiously into the world of television, Paul Terry embraced this new market for his ancient backlog of shorts. And he clearly had high hopes for his ringmaster, Barker Bill. This painting was probably proudly hanging in the lobby – it was fished out of the trash in the mid-sixties, mold and all…

Terry had advertised the show with full page ads in Terrytoon comic books in the 1950s:

Terry also promoted the show via a daily and Sunday comic strip (1954-55) drawn by animator Bob Kuwahara. I don’t think it was widely syndicated. Mark Kausler posted the only examples of the strip he could locate, from the The Winnipeg Free Press (via Newspaper Archive.com), The Boston Globe (via Proquest) and the Greensburg Daily Tribune (via Yahoo news). Below is a typical daily strip and a Sunday page (click to enlarge). Check Mark’s blog for many more Barker Bill strips: 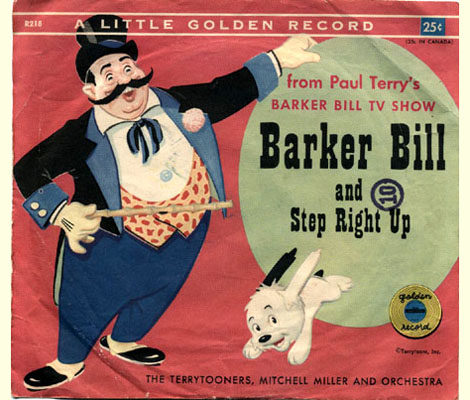 Lest you think Paul Terry spared no expense to create this new character – Barker Bill was really a retread, originally designed (by Charles Thorson) for the 1942 theatrical cartoon, Happy Circus Days. Here’s the model sheet (click to enlarge): 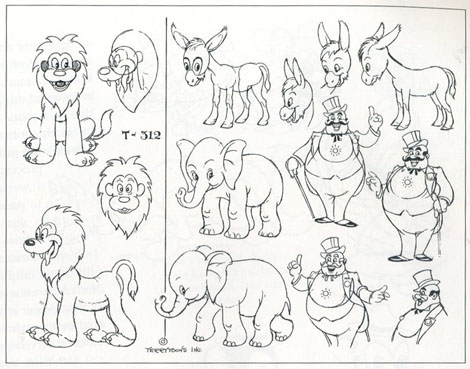 And here’s the film itself:

For the sake of completeness, here is Thorson’s models for the kid and dog in Happy Circus Days (click to enlarge).

And now you know everything about Barker Bill – whether you like it or not.

(Thanks, Mark Kausler and Mark Newgarden)