The Death of Fred Moore
Frank Welker Takes a Spin as the Easter Bunny
Reviews April 22, 2019 posted by Jerry Beck

Ten new books for Spring reading have shown up at my door (not all at once, but over the past few weeks). All of them have merits, some of them are absolute must-haves, and for the first time in years: none of them were edited, authored or co-authored by David Gerstein (don’t worry, Dave has several new book projects in production)! Here’s the run down – divided into four parts for your convenience:

Travels With Walt Disney (Disney Editions), by Jeff Kurtti – A highly enjoyable book that works both as a biography of Walt Disney and a visual travelogue of his adventures around the world. Walt was constantly photographed (particularly after his “overnight” success with Mickey Mouse) and author Kurtti combed the Disney Archives for rare publicity and personal shots of him and his family – assembling the book for the reader as if it were Walt’s own photo scrapbook. Lots of info for each picture, arranged chronologically to depict his lifetime experience. If you enjoy Disney (the man) and have ever wanted to vicariously ‘walk in his shoes’, this book offers you that chance. Fun.

The Life and Times of Ward Kimball by Todd James Pierce (University Press of Mississippi). Mark Mayerson reviewed this book here on Cartoon Research in February – and I second his take on it. This is a serious, full on biography of a man who arguably was one of the greatest influences on Disney animation, on Disney parks and various documentary productions – and on Walt Disney himself. I really admire the detail in the book – as well as reading about Kimball’s hot and cold relationship with Walt. This is a real page turner – and ultimately Pierce has produced a biography as informative and entertaining as any of Kimball’s films. A Must-Have.

The 2019 Hyperion Historical Alliance Annual by Didier Ghez, Garry Apgar, David Bossert, Jim Hollifield, Todd James Pierce, Lucas Seastrom. Edited by J.B. Kaufman and Jim Holifield. The Hyperion Historical Alliance is a private association of esteemed Disney historians who gather once a year to compare notes and share information. Starting now, in 2019, the group will collect papers and essays presented by their members and publish the work for the public to view. This first annual runs 75 pages and includes The Best of Bill Garity’s Diary, by Didier Ghez, an exploration of the building of Disney’s Burbank Studio; One of Walt’s – and Roy’s – Boys, a look at the career of Jack Cutting, by Holifield; Production Innovations at The Walt Disney Studios in the Mid-1930s, by Gary Apgar; Ward Kimball and the Making of Snow White and the Seven Dwarfs, by Todd James Pierce; The Firehouse Five Plus Two in 1950s, by Lucas Seastrom; and A Look at the Music Behind Disney’s The Little Mermaid by Dave Bossert. This is the first in a new series of small Disney History publications the HHA is planning, and I HIGHLY RECOMMEND you start buying these as they come out. 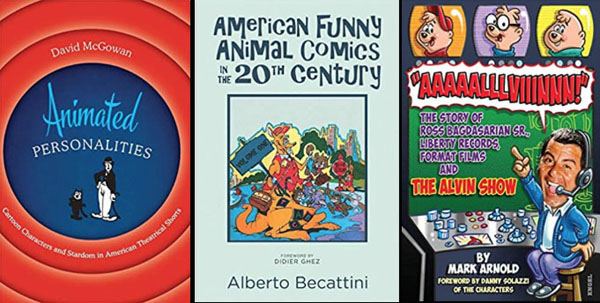 Animated Personalities: Cartoon Characters and Stardom in American Theatrical Shorts by David McGowan (University of Texas Press). This is one of them “academic books”, based on a thesis the author wrote at Loughborough University (in the UK). It argues that iconic Hollywood cartoon stars are equal to their live action counterparts – offering numerous examples through film history where the cartoon character out-performed its flesh-and-blood counterpart. It’s an interesting read – but not vital. McGowan has a valid point – but I think its one we already know. However, unlike most academic writers McGowan’s text is quite readable – and in the end Worth A Look.

American Funny Animal Comics in the 20th Century: Volume One (Theme Park Press) by Alberto Becattini. I really respect Alberto Becattini and his research… and we really need a book like this. But I’m not sure this is the book we need. Essentially this is an overview of the various American comic book companies and their funny animal comics, primarily during the Golden and Silver Age (1938-1970), and about the folks who wrote and drew them. Disney, DC, Timely (no Harvey?), and of course Western (Dell) are throughly covered. But there is so much to cover, Becattini’s book comes off more like an elaborate checklist. A lot of basic information is here. As a reference book, I’m glad I have it. I just wish it were a little more like the comics themselves – a little more fun. Reccomended As A Reference Book Only.

Aaaaalllviiinnn!: The Story of Ross Bagdasarian, Sr., Liberty Records, Format Films and The Alvin Show (Bear Manor) by Mark Arnold – Everything that could be compiled into a book about the creation of the original Alvin and the Chipmunks – the hit records and the 1961 animated prime time TV series – is collected here in 385 pages. Some assembly required, however, as much material (storyboards, merchandising art, newspaper clippings, record album covers, sheet music, trade advertisements, animation art, publicity stills, numerous quotes from artists, etc.) is simply laid out to enjoy. Arnold’s book allows the reader to soak it all in, providing the sequence of events that led to the creation of this novelty singing sensation – and its subsequent decades of success. If you’ve collected Arnold’s previous tomes on DePatie Freleng, Total Television and Harvey Comics, you know what to expect. For Serious Chipmunk Fans ONLY. 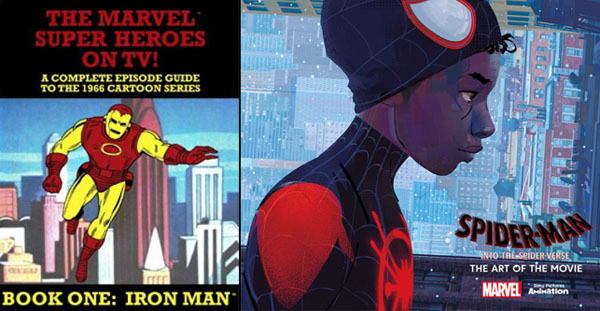 The Marvel Super Heroes On TV! Book One: IRON MAN: A Complete Episode Guide To The 1966 Grantray-Lawrence Cartoon Series (Volume 1) by J. Ballman. I’m giddy over this book. Those old 1966 limited animation Marvel Super Heroes cartoons are guilty pleasures of mine. This book, the first in a series of six, is the ultimate source of information on the making of these cartoons – the Iron Man segments in particular. Apparently Ballman had access to a treasure trove of production materials from the estate of producer Robert L. Lawrence. Storyboards, frame grabs, internal memos show how each episode was produced (Stan Lee had a stronger hand in these than I thought). Bios of the directors – including Ray Patterson, Don Lusk, Sid Marcus – as well as voices, writers and producers are included. If you are a Marvel nut like me (or have a nostalgia for this series) its a MUST-HAVE. If not, you can SKIP IT.

Spider-Man: Into the Spider-Verse -The Art of the Movie (Titan Books) by Ramin Zahed. My favorite animated feature in 2018, The Academy Award winning Spiderverse feature, has an “Art of” book – and its gorgeous. I loved the art in this film, and this book allows us to wallow in it and all the details that made the film work so completely. The mostly unsung art heroes of the film get their due – with character designer Shiyoon Kim taking center stage, aided and abetted by Jesis Alonso Iglesias, Jim Mahfood, Justin Thompson, Yashar Kassai and dozens of others (Craig Kellman’s Spider-Ham designs among them). Storyboards, preliminary inspiration art, production paintings and color keys… all just great. An important film – and this is a perfect behind the scenes document. If you love the “Art of” books or simply adore this movie: Highly Recommended. 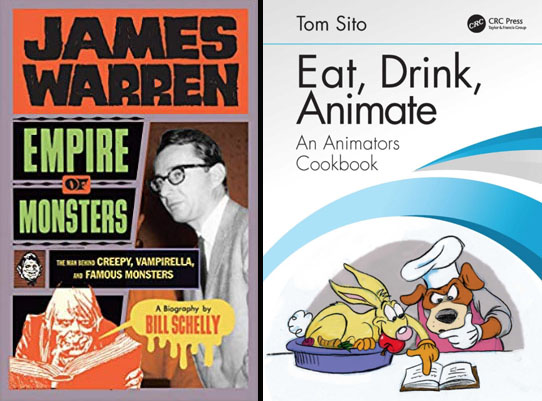 James Warren, Empire Of Monsters: The Man Behind Creepy, Vampirella, And Famous Monsters by Bill Schelly (Fantagraphics). I love the artist/writer bios written by Bill Schelly. He does his research and his writing style is compelling. And of course, these are subjects he (and I) are passionate about (his previous books include the bios of Harvey Kurtzman, John Stanley, Joe Kubert and Otto Binder). James Warren is a figure I always wanted to know more about. Not known for being an artist or writer, Warren was a publisher – mainly of Famous Monster of Filmland, Creepy, and Vampiriella – finding great success during the 1960s and 70s. His rise and fall – his background before, during and after Famous Monsters – and his quirky personality and questionable business practices are detailed here, answering my numerous questions about Warren’s company (and Captain Company) and how magazines like Spacemen, Screen Thrills Illustrated, The Spirit, Kurtzman’s Help!, Wildest Westerns, and that strange Heidi Saha publication came to be. For fans of Warren Publications – and publishing history in general – I Highly Recommend this!

Eat, Drink, Animate: An Animators Cookbook by Tom Sito (Focal Press). Animation director and college professor Sito has written scholarly tomes on the founding of the animation Union, and the birth of computer animation. He’s animated on Roger Rabbit and Beauty and the Beast, directed feature films, is a Governor at the Academy of Motion Pictures and teaches at USC. And now this. One of the most unusual subjects ever tackled by an animation historian: what the artists ate and drank – and a collection of their favorite recipes. And its delicious! Tom’s book is a surprising stew, combining animation history with 2-parts cook book and a dash of love for the people in the business – past and present. A gourmet feast for anyone who loves to eat (who doesn’t?) and draw. Do not read on an empty stomach – you’ll start salivating by the time you get to Walt Disney’s secret recipe for Chili, Hayao Miyazaki’s Ramen, Bob Clampett’s Chocolate Cake and Joe Grant’s Oatmeal. A fun read – and incredibly useful – especially in the kitchen. I ate it up – and Recommend it all you foodies out there.