The Other Disney Cartoons August 31, 2020 posted by JB Kaufman

A personal appearance or a radio broadcast by the one and only Donald Duck was an event, guaranteed to attract attention. And audiences were never disappointed.

Several “before-they-became-famous” artists join Mickey, Donald and Goofy in this longtime favorite Disney collection of Fourth of July favorites from the late ’70s.

Tomorrow is Donald Duck’s birthday, so it’s only fitting to discuss his film debut! Albert Hurter designed the characters, including Donald’s sailor cap and middy blouse. 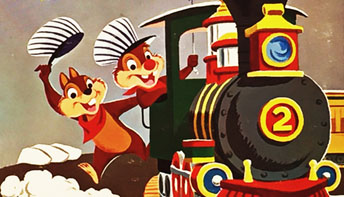 A look at the LP that marked Chip ’n’ Dale’s vinyl debut, Robie Lester’s earliest narrations, plus appearances by Ranger Woodlore and the Beagle Boys.

Clarence Nash was born December 7, 1904, in Watonga, Oklahoma, roughly three years before Oklahoma became a state. He never grew to be taller than five foot two. Nash was…

In His Own Words: Donald Duck

One of my favorite episodes of the Disney weekly television show was A Day in the Life of Donald Duck (1956) where Clarence Nash meets Donald Duck in his office at the Disney Studio.