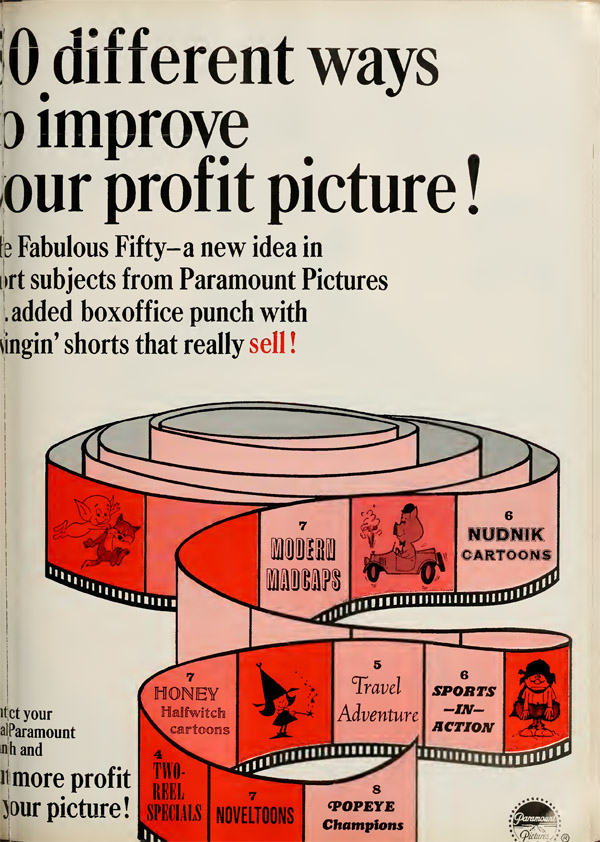 To say the cartoons produced from here on are a “mixed bag” would be an understatement. There are indeed some little gems to be filtered out. The good ones are worthy of some attention, the bad ones are truly abominable.

It would be another year of change at the top management level – all while trying to produce a consistent product, maintaining a release schedule and reaching to create a popular character of some sort – any sort.

Howard Post started the season concentrating his focus on Honey Halfwitch, a series he apparently sold the top brass at Paramount on. Desperate for something, they threw themselves behind it. The lead character (voiced by popular TV puppeteer Shari Lewis) is somewhat cute, but Post loads the premise with too many characters and a rich universe (perhaps too rich) that could fit easily within the Harvey Comics world (which Post was a part of, drawing Spooky, Hot Stuff and others before, during and after this period).

His other efforts to create cartoon stars landed with a thud – perhaps some of the worst characters in the history of animation – in some of the poorest films ever foist upon the movie-going public: Rat Ffink and Ffat Kat, Hangdog and Moxie Foxie, Rapid Rabbit and Road Hog. I’m not making these up. They were real; I can’t unsee them.

The worst offender was probably “Booby Baboon”. A chimpanzee ex-con turned newspaper reporter, who appeared in two painfully unfunny Modern Madcaps before Paramount pulled the plug. The studio knew it needed a more experience hand to run the studio creatively, and they turned to veteran animator/director Shamus Culhane in late 1965.

According to Culhane (in his book, Talking Animals And Other People), “Post had incurred the wrath of some members of Paramount’s board of directors when he produced a film about Noah’s Ark that seemed to have anti-religious overtones.” The worst offense of Post’s Noah’s Ark picture, Two By Two, is its blatant attempt to rip-off the character of Daffy Duck – here called “Quacky Whack”. The short was held up from release until about a year after Post was let go.

In addition to hiring Culhane to replace Post, the studio (fronted by Paramount executive Burton Hanft) gave a series order to Gene Deitch. In 1964 Deitch submitted his latest short (Nudnik #2) to the Academy and he was once again nominated for an Oscar. Paramount, still hurting from the loss of Seymour Kneitel, decided to pick up the short (retitled as Here’s Nudnik) and give Deitch a commitment to release six Nudnik cartoons a year – in both the 65-66 season and the 66-67 season to come!

Howard Post was dismissed while in the middle of a special project he had great hopes for – the first of series of Bill Dana “Jose Jimenez” animated comedies. Shamus Culhane took over the studio in the middle of this particular production. The concept was abandoned after making the pilot, but the material was released as a short, I Want My Mummy, (embed below) in March 1966.

Getting Culhane up to speed at his new studio took several months – to ease the transition, they took an incomplete Kozmo cartoon (Space Kid – the cartoon Kneitel was working on when he had his heart attack) off the shelf, completed it and released it in February to help satisfy the troubled release schedule. Culhane’s new studio also had to finish the contract for Honey Halfwitch cartoons they were committed to – most written and recorded before Howard Post was dismissed.

Culhane encouraged his artists at Paramount – here participating with an in-house art show, covered by Paramount’s house organ in May 1966.

Culhane came in and encouraged a new progressive creative policy at Paramount – the goal to diversify what contemporary theatrical shorts could be. Never mind that the sales department simply wanted another “Bugs Bunny”, or that the parent company’s goal of moving into television production demanded a more “commercial” approach.

Culhane’s first brainstorm was a character named “Sir Blur” – a medieval take on Mr. Magoo. The initial cartoons are certainly different and are relatively pleasing to the eye. But they are essentially unfunny and irrelevant. Time-filler material. Nothing to really talk about.

His next move – and maybe his best move – was to hire artist Gil Miret to design his pictures and to champion animator Howard Beckerman as a writer and character designer. Beckerman’s tour-de-force The Trip was exactly the kind of short Culhane wanted the studio to make. One with a strong ‘artists point of view’. It’s essentially the kind of little independent film that animators would create on their own over the next 20 years.

More about Culhane and a look at his best shorts next week. For now, let’s take a closer look at the 1965-66 releases.

But first, a moment of silence for the Noveltoons (which began in 1943) and the Modern Madcaps (which started in 1958) – this is where these series come to an end.

SOLITARY REFINEMENT (9/65) Post/Reden. Booby Baboon tries to break of of prison.
THE OUTSIDE DOPE (11/65) Post/Tafuri. Reporter Booby Baboon, ordered to do a story on prison life, tries to get himself arrested.
I WANT MY MUMMY (3/66) Culhane/Harriton. Jose Jimenez (voiced by Bill Dana) applies for an archeology job which involves a search for a lost city and a mummy.
A BALMY KNIGHT (6/66) Culhane/Harriton. Nearsighted medieval knight Sir Blur stumbles upon Gran’pa Dragon and his son Sparky who are having a picnic.
A WEDDING KNIGHT (8/66) Culhane/Eugster. When King Arthur announces Tournament Day, with the winner earning the right to marry his fat, homely daughter, Sir Blur enters the competition.
TWO BY TWO (12/66) Post/Eugster. When Noah builds the ark, Quacky Whack seeks a female duck in order to board the ship.
THE BLACK SHEEP BLACKSMITH (1/67) Culhane/Tafuri. Sir Blur is a postman who has a postage-due letter for the blacksmith.

TALLY HOKUM (10/65) Post/Taras. Hangdog goes on a fox hunt for Moxie Foxie.
OP POP WHAM AND BOP (1/66) Post/Taras. Museum of Way-Out Art guard Ffat Kat chases hungry Rat Ffink around the latest installation.
SICK TRANSIT (1/66) Post/Taras. Slow-moving motorist Roadhog is in the way of the hot-rodding Rapid Rabbit.
SPACE KID (2/66) Kneitel/Silverman. In sort-of a space-age remake of SOCK-A-BYE BABY (1933), Kozmo comes back to Earth and ends up minding an infant for its mother – quieting all noise making on the city street with his ray gun.
GERONIMO AND SON (12/66) Culhane/Harriton/Beckerman. Native American Geronimo, who has never shot an arrow, is forced to compete in an archery competition.
THE TRIP (4/67) Culhane/Beckerman. An office worker on vacation, an ocean cruise, falls overboard and becomes a castaway – soon befriending a native gorilla on a desert island.
ROBIN HOODWINKED (6/67) Culhane/Eugster. When Sir Blur wins the election for Sherriff, the King orders him to capture Robin Hood.

SHOEFLIES (9/65) Post/Eugster. Teeny Meany convinces Honey Halfwitch to use Cousin Maggie’s magic wand to finish shining her shoes – causing the shoes to run amok.
BAGGIN’ THE DRAGON (2/66) Post/Eugster. While Cousin Maggie is away, Honey conjures up some monsters and tries to capture a fire breathing dragon.
FROM NAGS TO WITCHES (2/66) Post/Tafuri. Silent Knight and Honey Halfwitch help an old horse who has been thrown out of the castle.
TRICK OR CHEAT (3/66) Post/Taras. While Stanley The Sorcerer is babysitting Honey Halfwitch, the Chief Sorcerer arrives and wants to see Stanley’s magic tricks.
THE DEFIANT GIANT (6/66) Culhane/Eugster. Honey hypnotizes a giant named Oscar into thinking he’s a dwarf.
THRONE FOR A LOSS (7/66) Culhane/Pattengill. An enchanted frog tricks Stanley to return him to his former self – a ferocious lion. Honey and Maggie help to turn him back into a frog.
POTIONS AND NOTIONS (8/66) Culhane/Eugster. Honey pours the entire bottle of cousin Maggie’s love potion on Fraidy Bat’s birthday cake.

(Note: The Rocket Racket listed initially on Paramount’s release charts was subsequently removed – and replaced when Shamus Culhane took over.)

(Thanks to Ken Layton and Chris Sobieniak)