On the Thunderbean front: This semester, my full-time job (as a professor at the College for Creative Studies) has a schedule that allows me pretty good blocks of time to work on Thunderbean stuff, so I’ m wasting no time to move forward as much as possible, enjoyably. The Abbott and Costello Rarities set has a first pass master down as of earlier today- so that title may be off to replication as soon as it’ s approved by the other collaborators.

More Flip the Frogs are being scanned this next week, and the first batch of the Comi-Color shorts will start to be scanned in February. I’ m excited to see what they look like put together from their black and white separation masters – I’m hoping they look as good as the color Willie Whopper shorts did. We’ ll be posting pictures as they go, and will post some Flip the Frog still next week.

The Lou Bunin Project (right now the second longest in progress) has several meetings this next week as well. The masters are close to done for the Blu-ray upgrades to Mid Century Modern Volume 1 and 2, so Thunderbean is doing a special pre-order that includes both sets together, plus a special BDR disc of things that didn’t make it. Details are on the Thunderbean Website.

Thanks to everyone for supporting these projects. Work from the UPA (United Productions of America) studio appears on both sets, with many of the harder to find educational & industrial shorts. Very little has been written about theses shorts overall; I think one of the reasons is that it’s been harder to see many of these films until more recently. I find these films as entertaining as any of the theatrical shorts the studio made, and appreciate how especially good they look in Technicolor. 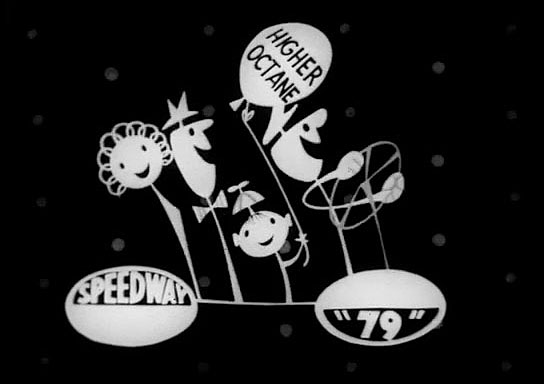 Man Alive! (1952) is a strikingly designed and executed short produced for the American Cancer Society.

I think it has some of the best layout and direction of any of the UPA films, and a master class on how to design each shot in an interesting way without being too ‘busy’. The story has as much thought as the design. It offers a gentle message about the value (both emotionally and physically) on having a screening for cancer. The studio’ s approach to the subject is in great contrast to any other educational shorts of the period – it strikes me that the studio understood not only how to make a short work an entertaining way while presenting a message, but was experimenting with how entertainment and messaging work together with a modern audience rather than relying on tried and true ideas on how to create a short with an educational message.

It would be easy to have such unique design elements overpower the message or even the animation. The background design, although colorful and often more complicated, works beautifully here, with extreme angles throughout that work well in their simplicity of dominant and subdominant elements. The timing for emotional resonance is especially well done here, particularly as “Ed” morphs into his various personalities.

The crew on this short (as in most of the UPA non-theatricals) is top notch. Bill Hurtz directs, with layout and design by Art Heinemann and Sterling Sturtevant. Background artists include Robert Mcintosh and Jules Engel. Credited animators are Cecil Surry, Phil Monroe and Rudy Larriva, although I think I recognize other animators work as well. Here is our digital transfer and cleanup on Man Alive! in HD. from a family decent 16mm IB Technicolor print.