Filmation’s “The Archie Show” on Records

A groovy peep at the first album by the world’s most successful animated pop band, from a Saturday Morning series that almost half the U.S. watched every week. 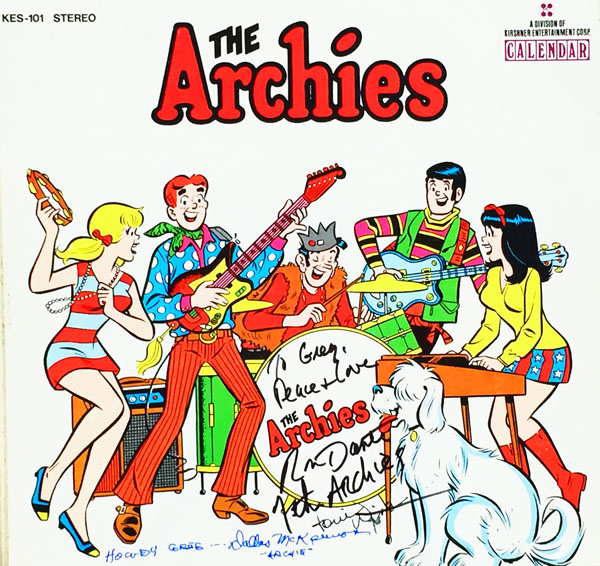 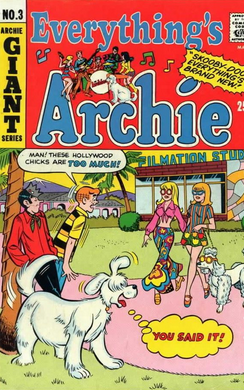 On Saturday, September 14, 1968, millions of kids (and grownups) tuned in to see what the Archie characters would be like as animated characters. A lot of viewers must have liked what they saw because the series would score CBS ratings shares in the 40s, which was spectacular for those days and almost unthinkable today.

The animated version was an instant phenomenon, especially in the area of pop music. Like The Monkees—which were initially under the supervision of Don Kirshner—original pop tunes were featured on the Saturday morning show. But unlike The Monkees TV show, which presented the songs over “romp” montage sequences, The Archie Show offered up a dance (which wasn’t always humanly possible to do), followed by a song in the form of a video.

Filmation had already pleased CBS with The Adventures of Superman, now they were solidly placed as the chief rival studio to Hanna-Barbera (which, like all the other animation studios of the time, launched a parade of cartoons with pop bands). While several launched albums and a few tours, none could equal the success of The Archies, which would reach its zenith with “Sugar, Sugar”, the number one song of 1969 (and was featured on their second album).

The first album blends bouncy dance tunes, teen angst, love songs and peppy rock n’ roll in songs about games, cars, dating and other “general-audience” adolescent issues. What makes it more than a trivia footnote is the level of the songwriting, playing and performing. This was not slapped together under the assumption that “kids wouldn’t know the difference”, it was produced with all the skill and professionalism of the best albums of its day. 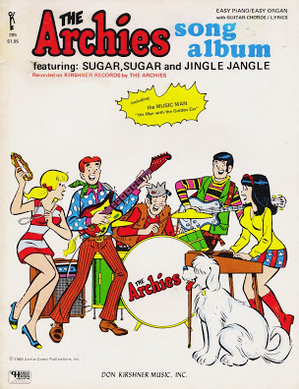 Ron Dante, who was not permitted to reveal his contributions at the time, was (and still is) a singer of astonishing range and versatility. Although there were several prominent singers involved—particularly Toni Wine—Dante sang on numerous tracks and gave the recordings a distinctive sound (as he did for The Detergents and The Cuff Links).

“Bang-Shang-A-Lang” was the song chosen for release as a single, and it received respectable airplay. I will never forget my brother telling me, “There’s an Archie song playing on the radio!” I rushed out to the garage where the radio, sitting on the clothes dryer, blared the tune to my surprise and delight. A few weeks later, Ed Sullivan actually announced the appearance of The Archies on his show as if they actually were going to appear live, but he actually presented the “Bang-Shang-A-Lang” animated clip.

Filmation’s The Archie Show (1968), The Archie Comedy Hour (1969) and Archie’s Funhouse (1970) remain the most successful filmed interpretations of the comic books. Archie had a moderate success as a radio show (with Bob Hastings) but never made a successful transition to live-action TV despite numerous attempts. It’s ironic that the property that could be considered America’s longest running situation comedy has yet to become a TV sitcom. Perhaps it’s because almost every teenage TV comedy is, in one way or another, an extension of the Archie format.

GIVE A LITTLE LISTEN
“Catchin’ Up On Fun”
Several Archies songs were released on cereal boxes. You would take the bag out of the box and cut out the record, get a coin to keep it from slipping on your record player, and thrill to very low-fi Archies musical goodness. It was quite wonderful to finally hear the songs on solid vinyl records. “Catchin’ Up on Fun” was the song on the TV commercial about the second wave of Archies records.

An almost identical remake (with strings) by The Love Generation: 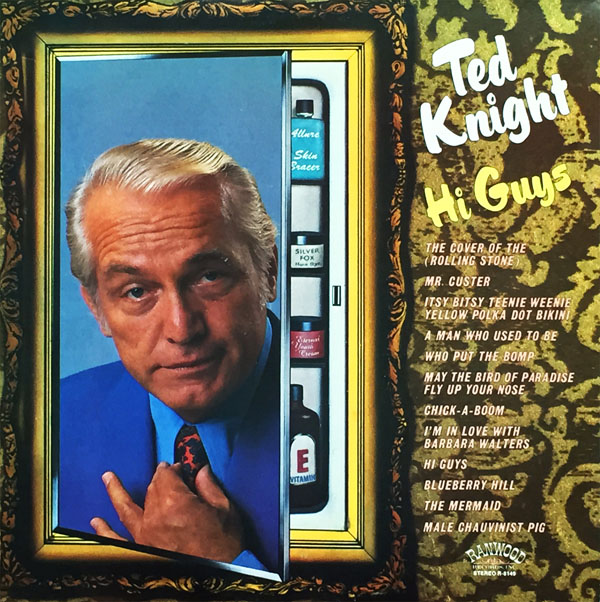 Ted Knight was a longtime friend of the Filmation founders, not only as a frequent voice actor in his pre-Mary Tyler Moore Show days, but also as a part of the legendary story of how the studio was able to secure DC’s approval as their licensee. Filmation had no studio, so they rented office space and filled it with “artists”, working furiously as Ted Knight supervised them. Clearly Scheimer and Prescott owed Knight for coming through for them, and he owed them for giving him work during the very lean years before he hit TV stardom as Ted Baxter. 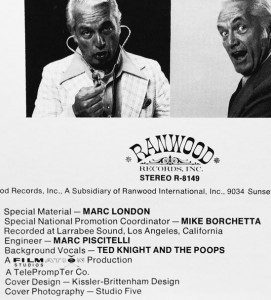 Portion of back cover of Ted Knight’s album with credit to Filmation (click to enlarge).

The strangest product of this friendship is this album, which is literally a Filmation Studios Production without any animation or live action. The idea was that Knight, who was riding high as the now-classic MTM series was racking up ratings and awards, might sell some novelty records in the Ted Baxter persona, singing songs written especially for the album by Filmation talent and crooning the silliest selections possible.

Knight energetically promoted the album on The Merv Griffin Show, even mentioning his friends Scheimer and Prescott as his teammates on the projects. (Merv’s comment: “Oooooooo.”)

Listening to it now, Hi Guys is of course, somewhat dated and un-PC (as was Ted Baxter himself), but what is more startling is how much Knight/Baxter’s singing sounds like Dan Castellaneta’s singing for Homer Simpson. The production values on the album are superb, headed by Jackie Mills, who was responsible for bubblegum music galore, including Bobby Sherman’s discs and several Saturday Morning pop bands including The Brady Kids and The Bedrock Rockers.

Of particular note is Ted Knight’s rendition of what is in essence a Filmation song, “Chick-A-Boom”. Originally created for Filmation’s Groovie Goolies series, it was re-recorded by actor/singer Dick Monda (who also sang for the Goolies). With the lyrics ramped up to a “nudge-nudge-say-no-more” level, Monda recorded the song as “Daddy Dewdrop” and had a sizable hit.

GIVE A LITTLE LISTEN
“Blueberry Hill”
Ted Knight once explained his approach to voice acting as basically doing bad impressions of famous people and, the more unrecognizable they were, the better for the cartoon voice. He was being more than modest, though, because if you revisit his performances on The Mary Tyler Moore Show, the humor is as much from his verbal delivery as it is from his physical comedic skills. This song allows Knight to do his Humphrey Bogart and Jimmy Cagney impression. I’m guessing that the producer speaking with him is Jackie Mills.