The Early Bird and the Worm was one of the hardest to find of the Kinex films. It uses combined drawn animation with the stop motion, making this particular short even more unusual.

It’s understandable the Meany, Miny and Moe cartoons were the least of the series that Walter Lantz produced in the 1930s. Here’s an example why.

The Gold Getters is far from a highlight of the Scrappy series, and its a really good example of how sometimes the Columbia cartoons are not quite cohesive.

After the Cut and Landing Accidents were produced for the Navy. These are especially hard to come by, leaving vintage prints from the era being the only copies available. 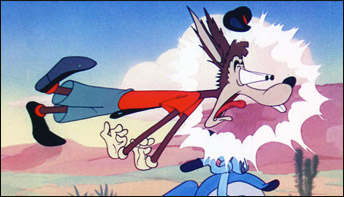 Showing Cartoons from Your Collection To Others

Write a short note about a favorite showing you went to, or a time you showed an audience something that they really enjoyed.

This week we look at The Plowboy’s Revenge (1927), a pretty standard Aesop’s Fable – other than being a dark tale of servitude and murder.

Seeing this film in Technicolor is a revelation, especially the almost neon-bright contrasting color palettes in Shane Miller’s backgrounds.

I run this short in my animation history class every year; Jerry runs it in his class at Cal Arts as well. One of the most unusual of the Gene Deitch Terrytoons – a time period of unusual Terrytoons.

Happy Birthday, United States! The 4th of July and animation – and a Lou Bunin pre-order

Here are my usual favorite 4th of July cartoons, or films that have the flavor of American ideals sprinkled in them.

The preservation work on Ub Iwerks ComiColor cartoons continues. Here’s a little report on the state of the master film elements for the earliest films.