Cartoons Considered For An Academy Award – 1978 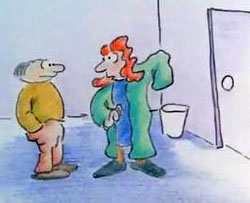 “Craft”, “Heart” or “Humor” – the animated shorts submitted to the Academy usually fall under one or more of these categories. This years three nominees represent each of those labels – separately. Vinton’s Rip Van Winkle tells a charming story, but has claymation ‘craft’ to spare. Borge Ring’s Oh My Darling is expertly animated with a strong dose of ‘heart’. It seems to me ‘heart’ and ‘humor’ always trump ‘craft’ at the Oscars. This year ‘humor’ got the deciding vote with Macaulay and Weldon’s NFB entry, Special Delivery.

Certainly not a break through in any technical way, Special Delivery clearly won Oscar’s favor with its crisp storytelling and simple art style. It’s the film’s humorous tone and surprising twists and turns – its metamorphosing animation – that appealed to voters this year. It’s still a cute little film that holds up rather well.

On April 9th, 1979 at the Dorothy Chandler Pavillion, presenters Carol Lynley and Robbie Benson present the Oscar for Short Film (Animated) for Special Delivery to Eunice Macaulay and John Weldon at the 51st Academy Awards. Here’s the video, below:

The Academy Awards this year also presented a special Oscar for lifetime achievement to Walter Lantz. I’d be remiss if I didn’t post it here:

And so we continue our ongoing research into what other cartoons were submitted to the Academy for Oscar consideration but failed to make the cut. In 1978, there were 40 entries. Submitted, screened, but NOT nominated were:

* Those marked above with an asterisk are films we could not find video or information on. All others are embed below 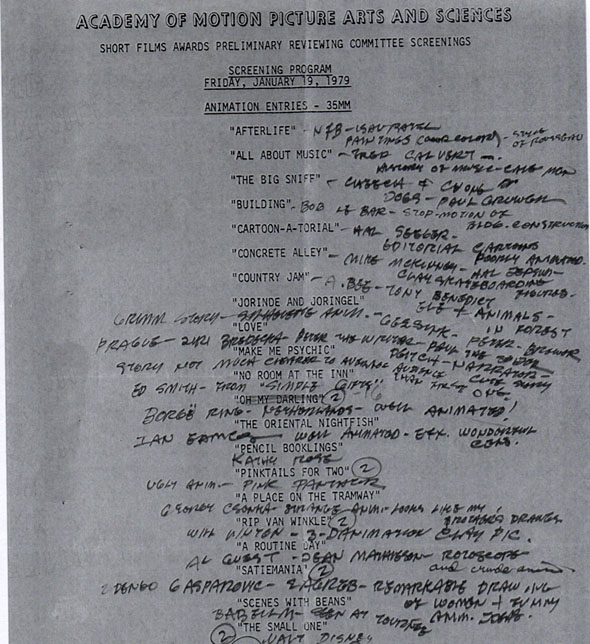 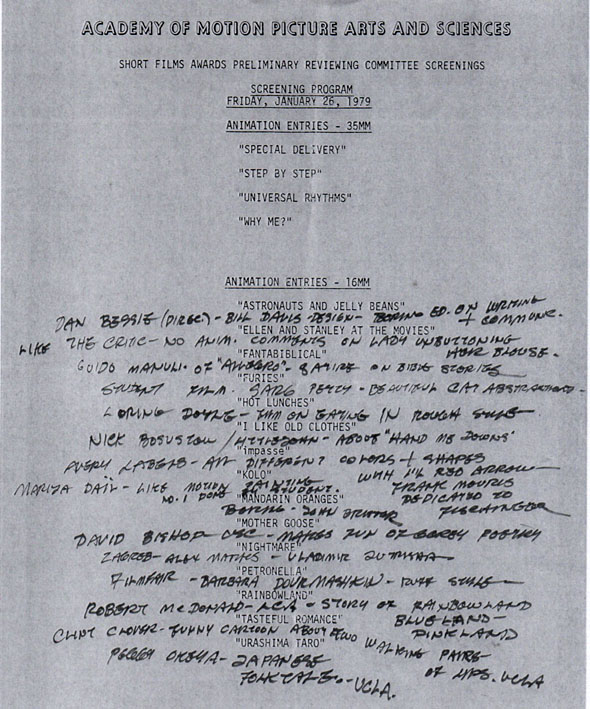 With these posts we ask that you put yourself in the place of the nominating committee – which of the films submitted would you have nominated? Which cartoon should have won? For your edification and viewing pleasure, we have found embeds (below) for 18 of the qualified submissions that the Academy screened, but didn’t make the cut.

The subject of the afterlife as imagined by several cultures – a grand prize winner at Annecy.

Yes – that Hal Seeger. The Milton the Monster/Muggy-Doo Boy Cat Hal Seeger. Newsweek sponsored these animated editorial cartoons – not sure how many were produced, or where they were shown – Cartoon-a-torial was produced by Hal Seeger Studios beginning in 1978.

Sally’s follow up to Quasi At The Quackadero is, in my opinion, just as good as the original.

NO ROOM AT THE INN – R.O. Blechman

A segment of the PBS Simple Gifts series.

The McCartney’s sponsored several short animated films – proto-music videos – like this one by rock-and-roll animator Ian Eames (who made several animated shorts for the likes of Mike Oldfield, Roger Daltry and Pink Floyd)

Kathy Rose makes experimental/personal films that have a certain charm. I like them.

This is one of the first “made-for-television” Pink Panther shorts that was concurrently given a theatrical release as well. All things considered, it’s not bad – I credit the skills of director Art Davis here, who was determined to make a funny picture and not just churn it out, which most of his colleagues were doing at this point.

The official video release of Klaatu’s “A Routine Day” from 1979, to promote the Sir Army Suit album. This music video was part of an incomplete animated special that has never been released called Happy New Year Planet Earth. Produced by Al Guest & Jean Mathieson.

To the bouncy tunes of Erik Satie, a stream of consciousness piece, as various images flash by like an animated sketchbook.

THE SMALL ONE – Don Bluth

Never mind what I think – what do you think about The Small One?

Mothers love – in the face of protecting children in a world of foul water and limited food.

WHY ME? – Derek Lamb

Funny short illustrating the reactions of an individual (voiced by Marshall Ephron) whose doctor has just told him he will soon die. A good one.

Love all the Guido Manulli films from the 1970s. This short features a quick gag with Mickey Mouse and Donald Duck. If only The Small One did…

Another experimental film from the creators of Frank Film.

(Once again, super-special thanks to Chris Sobieniak – and Mark Kausler)