Flights of Fancy (Part 29): The Sum “Total” of All Parts
The Many Adventures of Mighty Mouse
THUNDERBEAN THURSDAY July 7, 2022 posted by Steve Stanchfield

Since the Fourth of July was on a Monday, It feels like I’m writing this on Tuesday instead of Wednesday! I was lucky enough to be able to spend a little time just organizing and planning so far this week, and even have been able to animate a little for a project too.

Working on four of the “Official” sets have been the concentration this summer. As of now, One is finished and two others, Flip the Frog and Stop Motion Marvels 1 are nearly done Within the month the Van Beuren Tom and Jerry set will be starting to finish too. It’s easily the most projects getting done at the same time here. I’ll be off to New York to scan more material as well as visit friends and colleagues. Next will be working on Rainbow Parades, volume 2, the Long-in-progress Lou Bunin set and wrapping up the Little King set.

I was also able to spend some time working on a bunch of special sets, including a revision of an old one that I’ve wanted to update too. The current sets are available at the Thunderbean shop. We’ll be taking more of the special sets down in another week or so. Thanks to everyone for supporting all these projects; it’s made a huge difference in being able to move forward. You can see a list of what will be released over the summer on the Thunderbean Status page at Thunderbeanshop.com.

Seeing as things are going fast and furious here, it’s been pretty hard to concentrate on one thing at a time, but I’ve been spending a little time sending things to clean up to freelancers and then back to forgetting what was sent out! 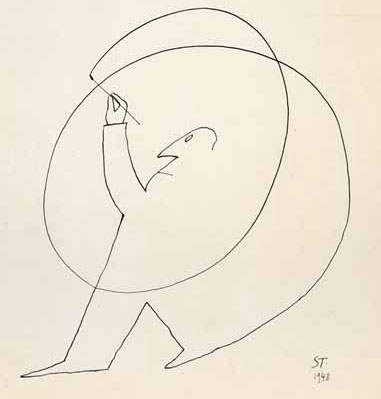 A Saul Steinberg drawing from 1948

And— onto our cartoon of the week! “Can You Handle It?”

A little while back, I won a few reels of animated work from the Cal Dunn studios of Chicago, Ill. The material seems to date from the late 50s and early 60s. One of the reels was what appears to be a commercial demo reel from the studio; the other is an industrial film called Can You Handle It?. When I showed this film right off the projector back in 2020, Animation historian extraordinaire Yowp gave some great background info on the studio. He mentioned Art Springer was Cal Dunn’s chief animator in this period and that the studio made a series of shorts, like this one, for the National Safety Council. He also mentioned that this film was mentioned in the February 1959 issue of Business Screen, as well as the music being from the Valentino Mood Music Library (this particular track is “Komic Capers” by Roger Roger).

It’s a low budget production, but clear in its message and easy to watch. While the graphics seem to owe more than a little to UPA and Saul Steinberg’s design sensibilities, I sort of liked seeing our “Brotherhood of Man” hero learn the fine details of lifting. He also looks like he’s been eating well for the past 14 years! A simple message and a simply designed film for education.

Here’s the current “raw” scan of this short from the 16mm print. We’ll be giving it a little cleanup for its appearance on ‘Mid Century Modern, Volume 3’ coming soon.