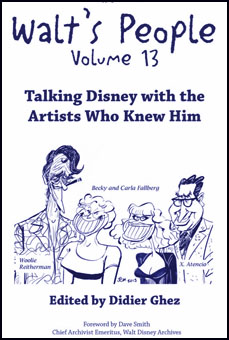 Editor/historian Didier Ghez is the gift-giver. His passion is for deep-dish research into Disney history – by way of unpublished interviews with Disney artists who had some contact with Walt or a strong connection to the studio. These interviews are coaxed from the archives of such distinguished historians as Charles Solomon, Jim Korkis, Michael Barrier, Les Perkins, John Culhane, John Canemaker, Malcom Willits, Alberto Becattini, Robin Allan, Michael Broggie and several others (in this volume alone), to name but a few.

The 13th volume contains informative chats with over two dozen Disney figures, including Joe Grant, Roy E. Disney, Milt Neil, Al Dempster, Woolie Reitherman, Jules Engel, Floyd Gottfredson, Virginia Davis, Fess Parker and many more. These are thorough, yet casual, interviews; When I sit down with one of these volumes I feel I’m spending personal quality time with each interviewee.

There is so much information to be gleaned from these articles and interviews. Virginia Davis recalls doing voices in Pinocchio; George Bakes talks about Bill Tytla; Jules Engel describing his sympatico relationship with Oskar Fischinger; Fred Kopietz reveals he did the lettering/titles on Walter Lantz cartoons in the 1930s, his incredible short-lived stint on Beany & Cecil, then doing commercials at Hanna Barbera. As you can see, the conversations go way beyond Disney to add to our knowledge of the other Hollywood (and New York) cartoon studios This is great stuff.

The interviews with Fred Kopietz, X. Atencio and Dave Spafford are like seven-course meals in terms of what ground they cover and new facts exposed. There are also several interviews here relating to Disney’s live action True-Life Adventures – but make no mistake, these add significantly to big picture of Disney’s career.

Ghez’ series of Walt’s People volumes are invaluable. If you are reading this site, if you have a thirst for more information on the people who made your favorite animated films – you simply must-have these vital tomes. Vol. 13 is 575 pages, and costs $15.85 on Amazon. It’s a steal.