This post is (and the next few are) a post-script the series I’d been placing in this space since June. A few of you may appreciate this one – an attempt to list what animated films Paramount Pictures released since closing their in-house studio in 1967.

You can see from the above news clipping from Boxoffice Magazine November 1967, from 1968 onward Paramount had virtually nothing more to do with short cartoons. There would be no re-releases of previous Famous Studio or Paramount Studio shorts – a policy common place with every other studio in town, including Disney, Columbia, MGM – even Universal, Fox and Warners were augmenting their new releases with a vigorous re-release schedule.

There were two immediate exceptions. After winning an Oscar for the Herb Alpert Double Feature, Paramount wisely picked up two more John Hubley independents – both garnering Oscar nominations in subsequent years. The first in May 1968 was Hubley’s A Windy Day. The second, released in 1969, originally made as an industrial film for IBM, Of Men and Demons.

As a sidebar, it’s worth noting (as mentioned in the Boxoffice clipping above) that Paramount pretty-much replaced the cartoons with a live action series, Here’s Homer, produced and directed by one Homer Groening. Considering his young son, Matt, would one day play a significant role in the history of animation with the creation of The Simpsons – this footnote cannot be ignored. Here’s an example of the series (this particular one released May 1968):

The next time Paramount released an animated short would be in 1992, Itsy Bitsy Spider, produced by Hyperion (directed by Matt O’Callahan, written by Michael O’Donohue) – tagged with the release of Hyperion’s feature Bebe’s Kids (7/23/92):

After this, the next few shorts were attached to Nickelodeon Movies:

• Hey Arnold’s pilot, made in 1994, was released to theaters by Paramount on July 10th, 1996 with Harriet the Spy, Nickelodeon’s first movie. 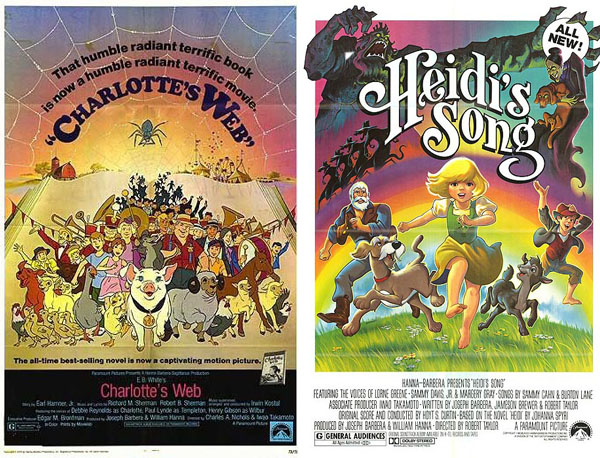 COONSKIN (8/1/75) Paramount/Bryanston. 83 mins. Director: Ralph Bakshi. Eight years after being dismissed from Paramount, Bakshi returns with an outrageous feature – so controversial that Paramount was forced to sell the film to an independent distributor. Two escaped convicts, hiding from authorities, listen to Pappy (Scatman Crothers) tell stories of cartoon characters Brother Rabbit, Brother Bear and Brother Fox (told with animation) that resemble a violent, inner-city update of “Song Of The South”. Rated R. 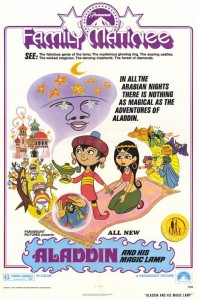 ALADDIN AND HIS MAGIC LAMP (7/1/75) 70 mins. Director: Jean Image. Released in France in 1970, this film was picked up by Paramount and bundled into a package of family matinee movies in 1975.

ALICE IN A NEW WONDERLAND (1966/1975) 52 mins. Director: Gene Deitch. Once again Gene Deitch is connected to Paramount. This feature was originally produced in the mid-60s, as Alice of Wonderland In Paris, and first released in 1966. Paramount reissued the film with a modified title as part of its “Family Matinee” package in 1975.

RACE FOR YOUR LIFE CHARLIE BROWN (8/24/77) 76 mins. D: Bill Melendez. Charlie Brown, Lucy and the Peanuts gang, away at summer camp, are challenged by bullies to a number of sporting activities, topped by a contest that takes them rafting on a wild river. Meanwhile, Snoopy and Woodstock get lost in the woods.

HEIDI’S SONG (11/19/82) 94 mins. D: Robert Taylor. Heidi bonds with her gruff grandfather and the animals of the mountain, then moves to the city to become a companion to Clara, who is confined to a wheelchair. A wicked housekeeper locks Heidi in the cellar, but with the help of some swingin’ cellar rats, and her mountain friends, returns to her Grandfather. A Hanna-Barbera production.

THE RUGRATS MOVIE (11/25/98) 79 mins. D: Norton Virgien, Igor Kovalyov. The rugrats gang, including newly arrived brother Dil, get lost in the woods when they take a ride in the Reptar Wagon, created by papa Stu.

JIMMY NEUTRON, BOY GENIUS (12/21/01) 83 mins. D: John A. Davis. (Computer Generated Imagery)When a kid inventor inadvertently causes alien invaders to kidnap all neighborhood parents, it’s up to him and his classmates to travel through space and mount a rescue.

HEY ARNOLD: THE MOVIE (6/28/02) 75 mns. D: Tuck Tucker. Arnold and his friends try to track down a document declaring his town a historical landmark in an effort to stop a greedy corporation from razing his neighborhood.

THE WILD THORNBERRYS MOVIE (12/20/02) 94 mins. D: Jeff McGrath, Cathy Malkasian. Sent to a London boarding school for her own good, Eliza Thornberry (who posessses the power to communicate with animals) returns to Africa to rescue a cheetah cub and a horde of elephants from two high-tech poachers.

THE SPONGEBOB SQUAREPANTS MOVIE (11/19/04) 99 mins. D: Stephen Hillenburg. When Plankton finally hatches a successful plan to lure customers away from the “Krusty Krab”, SpongeBob and Patrick go on a quest to retrieve the stolen crown of King Neptune. Along the way they face untold perils presented by scary sea monsters, a determined hit man and a live action David Hasselhoff.

RANGO (3/4/11) D: Gore Verbinski. ILM – Nickelodeon Movies. A chameleon that aspires to be a swashbuckling hero finds himself in a Western town plagued by bandits and is forced to literally play the role in order to protect it. Winner, Academy Award – Best Animated Feature.

THE ADVENTURES OF TINTIN (12/23/11) D: Steven Spielberg. (Motion Capture) Tintin and his friends discover directions to a sunken ship commanded by Capt. Haddock’s ancestor and go off on a treasure hunt.

THE SPONGEBOB MOVIE 2: SPONGE OUT OF WATER (2/13/15) D: Paul Tibbitt, Mike Mitchell. When a diabolical pirate above the sea steals the secret Krabby Patty formula, SpongeBob and his nemesis Plankton must team up in order to get it back.

CAPTURE THE FLAG (12/04/15) D: Enrique Gato. A young surfer rallies his friends to stop a billionaire from rewriting history as a way to horde Helium 3, the clean energy of the future.

ANOMALISA (12/30/15) D: Duke Johnson, Charlie Kaufman. A disillusioned author, during a speaking engagement in Cincinnati, meets a girl at his hotel whom he perceives is different from everyone else in his life. Stop Motion puppets. Rated R.

NEXT WEEK: Don’t Worry – We’ll go back and have more fun with Famous.

(Thanks, Luke aka “Paramount Cartoons”)