It’s been a while since we had a heart-to-heart talk about what’s going on behind the scenes here at Cartoon Research.

Actually things are going pretty good – but the time has come to make a small change. It’s been five years since we started this new daily blog format (and I believe almost 19 years since I launched this website/news site/blog). It’s incredible we’ve been able to maintain a 7-day a week schedule, providing a new post every single day, for those 5 years.

Couldn’t have done it without all those names on the masthead above – special above-and-beyond shout outs to Jim Korkis, Greg Ehrbar, Devon Baxter, Steve Stanchfield, the late Fred Patten… and really everyone noted above, for keeping this collective going all this time. I’m so proud of everything we’ve posted here.

Okay Okay… Let’s be clear: We are not coming to an end. It’s not over! It’s just becoming very difficult for me to provide a new post here every day. You might not know it from your POV but it takes a lot of work for all our writers to maintain the quality of post you’ve come to expect. And it takes more time than you’d believe to get those posts laid out and ready for posting every single day. In addition to my other activities, maintaining the Cartoon Research blog has been tough to juggle – For me, it’s like the old plate spinning routine, where one of these days a dish is gonna fall and smash…

But I love it! Cartoon Research is a labor of love. This blog is not a business (unfortunately). None of the ads you see here are paid for. It’s essentially my hobby – our hobby. (I do derive a piece of my income from my other blog Animation Scoop). This blog is exactly the way I like it – and it gives me great satisfaction.

So – to alleviate the pressure on my weekly schedule I’ve made an executive decision to cut back from seven days to 5-days-a-week – Five new posts, Monday through Friday, each week. And heck, I’ll leave the door open for an occasional Saturday post when I feel so inclined.

The new line-up, starting immediately, will be:

While I’ve got you here, I might as well plug a special upcoming local appearance – a re-post of a recent announcement from Animation Scoop that should be of interest to Cartoon Research readers:

I’ll be co-presenting a set of recently restored 35mm animated films at the bi-annual UCLA Festival of Preservation next month – at the Wilder Theatre in the Hammer Museum, in West Los Angeles (in Westwood).

This year for the first time, the bi-annual UCLA Archive event will be presented as a 3-Day weekend festival, instead of spread out over a whole month, as in previous years. The cartoons will be showcased in a special screening beginning at 11am (10:56am to be precise) on Sunday February 17th. A majority of this program are films preserved with funds provided by Asifa-Hollywood – these include a trio of rare 1930s Terrytoons, a duo of Technicolor George Pal Puppetoons and a classic Max Fleischer Betty Boop cartoon. Here’s the line-up:

George Pal won an Honorary Academy Award in 1944 for the development of “novel methods and techniques in the production of short subjects known as Puppetoons.” His achievement was the creation of “replacement animation”—a method still employed by puppet animators today. Jasper Goes Hunting perfectly illustrates this effect as little Jasper daydreams of elephant hunting through a Technicolor Congo. This short is notable for an unusual cameo using (spoiler alert!) Warner Bros. cartoon star Bugs Bunny (voiced by Mel Blanc, animated by Bob McKimson) in a Paramount short—the sort of cross-studio, once-in-a-lifetime team up that literally never happened again—until Who Framed Roger Rabbit 44 years later!—Jerry Beck

George Pal’s stop motion Puppetoons were peopled with all types of characters. Two of his most popular were a pair of lovestruck kids named Punchy and Judy. Here, down-on-his-luck Punchy obtains a magical straw hat from a plucky talking horse and transforms himself into Aladdin and, with the official permission of DC Comics, Superman. Hoping to impress Judy, Punchy’s delusions of grandeur only land him in jail. The talking horse is a witness at Punchy’s trial and cajoles the judge, arresting Officer Moriarty and members of the jury to test the hat, causing their secret selves to emerge inbound, a hilarious spectacle as their unfettered dreams and desire hold sway. —Jerry Beck 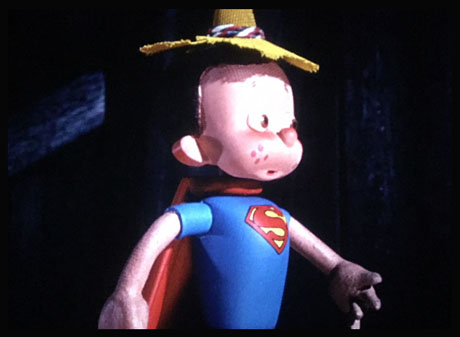 The Fleischer Brothers’ third and final pairing of Betty Boop and Cab Calloway, The Old Man of the Mountain (preceded by Minnie the Moocher, 1932, and Snow-White, 1933) opens with Calloway and his orchestra performing a brief version of “Minnie the Moocher” in live action. That’s the last we see of Calloway on screen but he voices all of the characters to come, except for Betty, who’s voiced by Bonnie Poe. Things get animated as the country animals raise a musical alarm, warning of The Old Man on the Mountain, to the melody of Calloway’s composition. Her vacation interrupted, Betty hikes to the peak where she confronts the bearded hermit who, at first, comes off like a misunderstood hepcat: “You’ve got to kick the gong, to get along with me,” he sings in “You’ve Got To Hi-Di-Hi.” When he turns lascivious, Betty makes a break for it and is saved by the animals who race to her rescue. —Jerry Beck 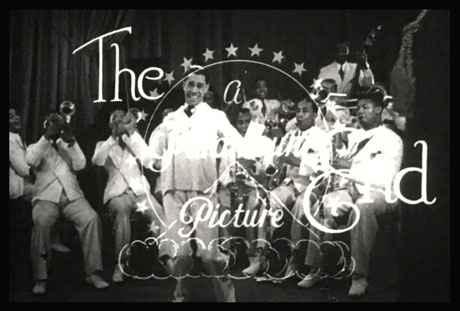 In this absolutely lunatic chase comedy, Paul Terry’s most enduring character, Farmer Al Falfa, is run out of his bed and through the house by pink pachyderms conjured when his pet goat eats a few beer cans during a midnight stroll (a scene censored for later Saturday morning kidvid television). The herd of spectral, dipsomaniacal elephants, evoking hi-dee-ho man Cab Calloway along the way, torment Al Falfa until the clever farmer plots his revenge. This is the only Terrytoon co-directed by talented Dan Gordon and the last cartoon at the studio to feature the work of future animation superstars Joe Barbera, Jack Zander and George Gordon, all of whom would leave Terry to reboot MGM’s cartoon studio in Culver City.—Jerry Beck 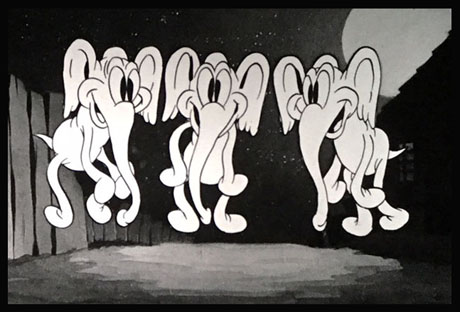 Releasing a new cartoon to theaters every two weeks, producer Paul Terry had the idea to create an animated movie serial parodying 1890s melodrama. This was the proposed first installment with four more “chapters” to be released over the next two months. The concept didn’t catch on, but the characters and tropes did—zaftig Fanny Zilch, the damsel in distress, pursued by mustachioed villain Oil Can Harry in his opera hat and the dashing (albeit effeminate) hero Strongheart. The cliffhanger situations and operetta format became a Terry studio staple over the next 20 years, including the return of Oil Can Harry himself, tropes later adopted by Terry’s 1940s-50s “Mighty Mouse” cartoons. Here’s where that all began.—Jerry Beck 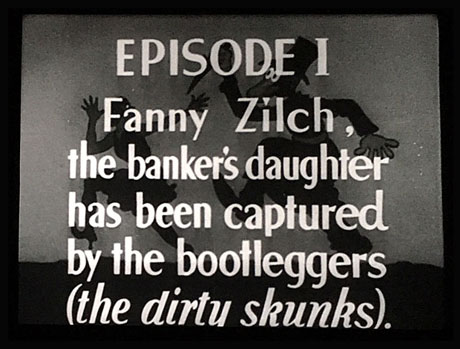 The first release from Terrytoons, a new studio run by animators Paul Terry and Frank Moser, formerly of Van Beuren’s popular silent-era Aesop’s Fables. Obtaining a contract from Educational Pictures (“The Spice of the Program”) for 26 sound cartoons a year, Terry made ‘em fast and cheap—but they are not without their charms. In his first year, every cartoon was named after a food that would suggest a setting for the gags and musical score. In this case the gags revolved around life in the USSR; the music, a symphony of pseudo Russian melodies. Note, that’s composer Philip A. Scheib seen in silhouette in an opening prologue.—Jerry Beck 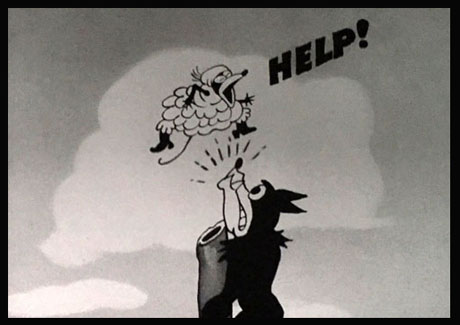 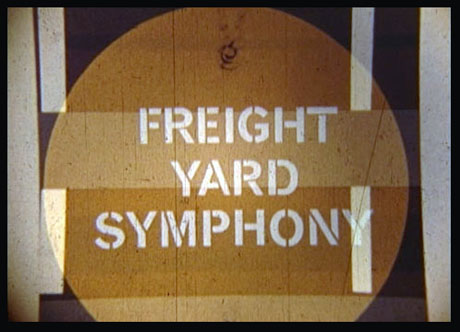 The cartoons will be followed by a program (at 1:11pm) of newly restored Laurel and Hardy shorts, featuring Perfect Day (1929), which was restored thanks to an incredibly successful UCLA Spark crowdfunding campaign, The Battle Of The Century (1927), Hog Wild (1930) and Brats (1930).

This event is at the Billy Wilder Theater at the Hammer Museum in Westwood, California. Admission to the Festival of Preservation is $50. for blanket admission to all shows, all three days. Advance tickets for just the animation program is $10. click here – or $9 at the box office on the day of the show.