Alvin And The Chipmunks Sing The Beatles

A celebration the 50th anniversary of The Beatles on The Ed Sullivan Show with a look at The Chipmunks album about which The Beatles themselves were supportive—plus a Chipette tribute to Mom.

Producer/Vocalist: Ross Bagdasarian. Engineer: Dave Hassinger. Cover Designer: Studio Five. Running Time: 28 minutes.
Songs: “All My Lovin’,” “Do You Want to Know a Secret?” “She Loves You,” “From Me to You,” “Love Me Do,” “Twist and Shout,” “A Hard Day’s Night,” “I Saw Her Standing There,” “Can’t Buy Me Love,” “Please Please Me,” “I Want to Hold Your Hand” by John Lennon and Paul McCartney.

Their eighth album for Liberty Records, The Chipmunks’ first complete album to embrace rock and roll was The Chipmunks Sing The Beatles Hits. It became the most-reissued album in the Chipmunks canon. Ross Bagdasarian Jr. told Goldmine magazine that his dad “thought it would be a cute idea for a Chipmunk record and he spoke with the Beatles. When he was in London, he even met the Beatles, who were very supportive of the idea.”

It was released between the CBS season and the syndication run of The Alvin Show, so the look of Alvin, Simon and Theodore reflects the series. In his new book, The Art of Jay Ward Productions, author Darrell Van Citters credits artist Bob Kurtz, “…the only one able to please Chipmunks creator Ross Bagdasarian; in fact, Kurtz’s character designs became the final models for Dave Seville and all three Chipmunks.”

Much as I love this album, the high-key songs present the Chipmunks at their shrillest, particularly “She Loves You” and “I Saw Her Standing There.” When they do The Beatles’ “whoo,” it sounds like a whistling teakettle. They are best suited to the lower-key harmonies of songs like “From Me to You” and “P.S. I Love You.” When I was a in the Cub Scouts, I spun this album on the Grosswald’s console stereo—set for repeat—and it played for hours. Mrs. Grosswald said, “Greg, after today you’re going to have me talking like a Chipmunk!”

The album’s success led to another pop collection, Chipmunks ‘a Go-Go, then Bagdasarian went back to a more easy listening style for his albums until his passing in 1972. His son and daughter-in-law, Ross Jr. and Janice Karman, revived The Chipmunks in the 1980’s, resulting in a long-running second animated series, four movies and an eclectic catalog of subsequent albums.

“Do You Want to Know a Secret?”
Since Mother’s Day is coming, this Beatles tune was inspired by John Lennon’s mum, who used to sing “I’m Wishing” to him as a child—with the opening verse, “Want to know a secret? Promise not to tell?” (Coincidentally, the Snow White-inspired Seven Dwarfs Mine Coaster ride opens May 28 at Magic Kingdom in Walt Disney World.)

The first animated feature starring Alvin and the Chipmunks was released nationally in 1987, 20 years before their first live-action/CG movie. The second Chipmunks TV series was already running on NBC and the feature ties into that series, complete with the character of Mrs. Miller, voiced by Dody Goodman, who hums two Ross Bagdasarian Sr.’s hit songs (“Come On-A My House” and “Witch Doctor”) in this film. 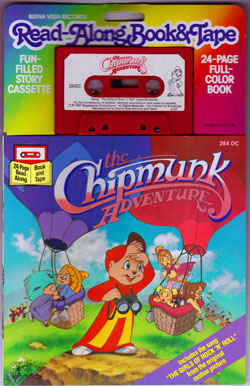 The other stars of the movie are a who’s-who of artists and animators who contributed in various ways to the feature, including Glen Keane, Dave Pruiksma, Andy Gaskill, Corny Cole, Heidi Guedel, Susan Kroyer, Will Finn, Kevin Lima and Bill Plympton, with “Special Thanks to Frank Thomas and Ollie Johnston.” Ron Dias gets an opening screen credit as “background color stylist.” Whatever relative strengths or weaknesses the finished film may have, it sure looks stunning—and the new Blu-ray shows the work of these artisans to major advantage. (The Blu-ray also includes one short cartoon from The Alvin show: “The Brave Chipmunks” from the album Around the World with The Chipmunks.

The soundtrack album was one of two albums released by Disneyland/Vista Records in 1987, along with two read-along cassettes (one based on this film and the other called The Chipmunks Join the Circus). Ironically, this all happened 20 years after the same label released Walt Disney’s concept for high-pitched voices, Ludwig Mousensky and the All-Mouse Orchestra and Chorus, only to be eclipsed by Bagdasarian’s twist on the technique the following year with the megahit, “The Chipmunk Song.” The album is still available on CD.

According to Ron Dias, since the movie was episodic and was completed over a long stretch of time and several sequences planned and dropped. The soundtrack album contains a song that didn’t make it into the finished product, “Weekend in France, Italy, England, Amsterdam, Greece,” though you can hear it in the background at the start of the sequence taking place in Greece. Could the song title be an inside joke about the deleted scenes?

GIVE A LITTLE LISTEN
“Main Theme / My Mother”
Even when she is pitched up for the Chipettes, Janice Karman’s lovely singing voice comes through on songs like this one, a melodic, touching tune by Randy Goodrum (who wrote Anne Murray’s hit, “You Needed Me”). Preceding this tune is the also wonderful theme music by Randy Edelman.