The first full-length Disney feature brought to life on the New York stage—a show that helped save Radio City Music Hall–was preserved on the last music LP with the Buena Vista label. 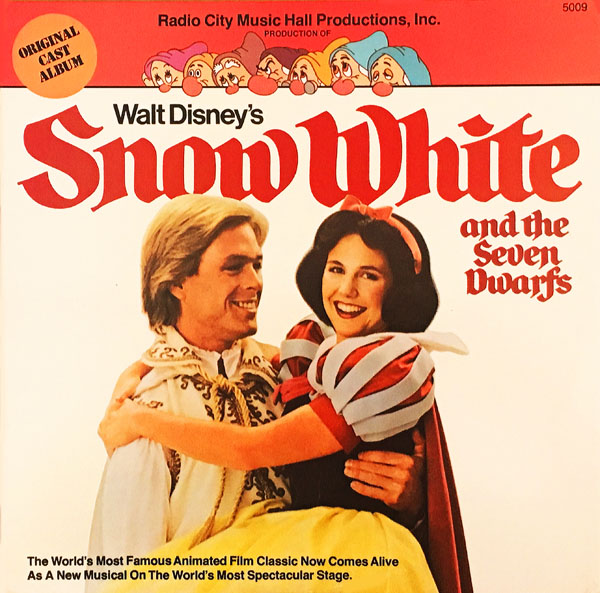 1937 Film Songs: ”I’m Wishing,” “One Song,” “With A Smile and A Song,” “Whistle While You Work,” “Heigh-Ho,” “Bluddle-Uddle-Um-Dum (The Washing Song),” “The Dwarfs Yodel Song (The Silly Song),” “Some Day My Prince Will Come” by Larry Morey, Frank Churchill.
1979 Stage Show Songs: “Welcome to the Kingdom,” Will I Ever See Her Again,” “Finale (Here’s the Happy Ending)” by Joe Cook, Jay Blackton.
Instrumentals: “Prelude,” “Queen’s Presentation” by Jay Blackton. 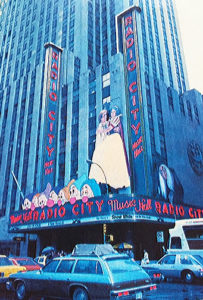 It is been stated that Walt Disney, despite popular and critical acclaim for his short cartoons in the 1930’s, realized his short cartoons had nowhere to go beyond their status as program fillers, despite their popular and critical success. For his studio to prosper—or continue to exist at all—he would have to find a way to make an animated feature. One reason cited for his decision to adapt the Grimm Brothers’ Snow White was his boyhood viewing of the 1916 silent film starring Marguerite Clark, based on the 1912 stage adaptation also with Clark, the first and only Broadway version of Snow White.

Disney’s 1937 animated feature became a cornerstone of the Disney organization, financing the studio that still operates in Burbank and setting the course for features and countless enterprises to follow. Coincidentally, when Walt Disney’s Snow White and the Seven Dwarfs also became a New York stage show within walking distance from Broadway on October 18th, 1979, it became the cornerstone of Radio City Music Hall as it stands now, not as a theater as much as an event center for celebrity appearances, TV specials and the crown jewel (and big tourist attraction), the Radio City Christmas Spectacular featuring the trademark precision-tapping, toy-soldier-clowning, Macy’s-Thanksgiving-Day-Parade-super-kicking Rockettes.

A year before, the historic entertainment palace faced financial ruin and was going to close forever, in what might have been a Snidely Whiplash “foreclosing the mortgage” Dudley Do-Right scenario. Members of the entertainment and public community pitched in when the Showpeople’s Committee to Save Radio City Music Hall was formed–including the Rockettes–to lobby for preservation and rejuvenation of the Hall. Within days of the deadline, after weeks of legal haggling, the Hall was placed on the National Registry of Historic Places.

Disney Legend Robert F. Jani, a creative entertainment executive who rose up the ranks in the early days of Disneyland, including the opening day festivities, was transitioning to his own company and consulting with Disney when he became the catalyst for bringing a version of Snow White to Radio City. Though it had been staged in St. Louis in 1969 and 1972, and there had been dozens of arena shows like Disney on Parade and Disney on Ice in venues worldwide, bringing Snow White to the world’s largest proscenium stage with some of Broadway’s finest talents was a major undertaking. This was the late ‘70s, when the economy was sagging, world news was bleak, and no one was sure that the public even wanted a Snow White stage show at Radio City Music Hall—much less in New York City, where it was unimaginable that Disney would one day own the New Amsterdam Theater and stage Broadway versions of Mary Poppins, Beauty and the Beast, The Lion King and others hits. 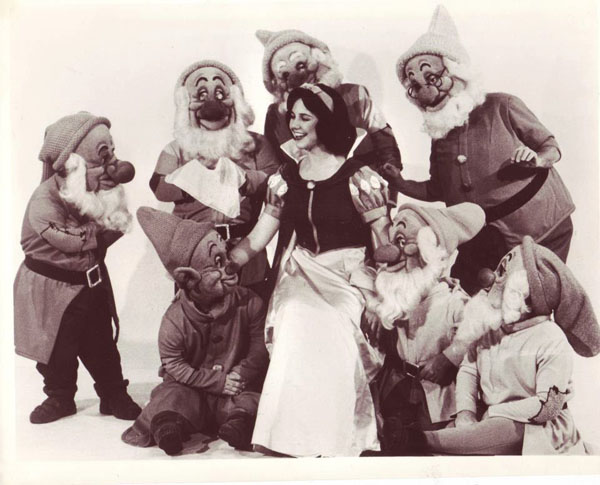 Yet the Snow White show was a smash, selling out its original 14 days, touring for several weeks before making a brief return engagement. Using his Disney Parks experience, Jani also produced the Christmas Spectacular, all of which helped bring the Hall back on its feet. The Disney connection arose again in the ‘80s when a special version of the Spectacular with the Rockettes appeared at Epcot in Florida.

As an original cast album, Snow White is on a par with those of Rodgers and Hammerstein or Lerner and Loewe in historic importance as well as entertainment value. The orchestrator, for example, worked on such Broadway shows as My Fair Lady, Hello Dolly! and Annie. Composer Jay Blackton was the arranger/conductor for the very first version of You’re a Good Man, Charlie Brown (it started as a record album, which we explored here) and the movie version of Oklahoma! Donald Pippin, who conducted and supervised the recording, was the vocal director for Broadway’s A Chorus Line, Mame and Oliver! 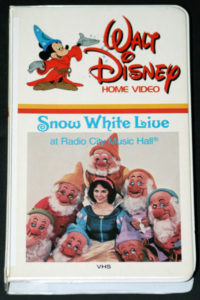 “Peanuts” fans may recognize the name of Don Potter, who plays Doc, as the original Snoopy in the stage musical, Snoopy!!! (which we talked about here). He was the second Off-Broadway Snoopy in “You’re a Good Man, Charlie Brown” (replacing Bill Hinnant) and sang for Snoopy in the TV special, Happy Anniversary, Charlie Brown. And some might recall Anne Francine—who played the Evil Queen and does not appear on the record—as Barbara Eden’s nemesis on the TV version of “Harper Valley PTA.” Francine’s resemblance to Bea Arthur must have been a factor in her casting as Bea Arthur’s replacement for the role of Vera Charles opposite Angela Lansbury on Broadway in Mame.

In addition to the cast album – which was the last score-only LP with the Buena Vista label before CD’s – the entire production was videotaped and broadcast many times as Snow White Live at Radio City Music Hall on Home Box Office (now HBO) and later on The Disney Channel. It was released on Beta and VHS but not DVD or Blu-ray. Perhaps it has been decided that it is too quaint in its staging, in the shadow of more sophisticated Disney Broadway productions, as well as a probable issues of ownership rights between Disney, Radio City and the Bourne music company to make it feasible. Of course, there is going to be all that programming content needed to fill on for that streaming service we’ve been hearing about…

At a recent evening honoring Richard M. Sherman, film composer John Debney (2016’s The Jungle Book, The Greatest Showman, Elf) said that he sometimes ends a film recording session by asking the orchestra to play a classic Disney piece from the original sheet music. Astonishing pros that they are, they play it from sight–and only Debney, Sherman and a select few are able to hear a live version of, for example, the Mary Poppins overture. For the Radio City production of Snow White, elements of the original overture and finale were re-created live for the fortunate folks who saw the show in person–and thanks to the Buena Vista LP, home listeners could enjoy hearing it in stereo.